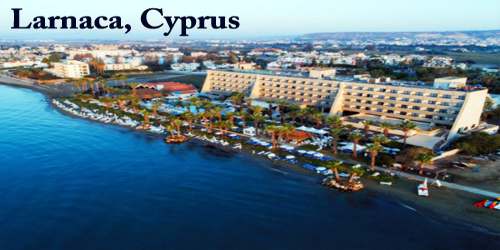 Larnaca (Greek: Λάρνακα (ˈlarnaka); Turkish: Larnaka or İskele) port town, southeastern Republic of Cyprus and the capital of the eponymous district. It is said that the town of Larnaca was originally called ‘Kition’, as it was believed that Kittim, the great-grandson of Noah, had established the first settlement around 6,000 years ago. It is the third-largest city in the country, after Nicosia and Limassol, with a metro population of 144,200 in 2015.

The modern town, on the bay between Capes Kiti and Pyla, overlays much of ancient Citium, founded by the Mycenaeans in the 13th century BCE; it was rebuilt by the Byzantines. Citium was the birthplace of the Greek philosopher Zeno of Citium, the founder of Stoicism. Its modern name (meaning “Funerary Urn” in Greek) recalls the many tombs under its soil. The modern port, developed during Ottoman occupation (1571–1878), was enlarged after the Turkish intervention (1974) in northern Cyprus closed the island’s main port at Famagusta.

Larnaca is known for its palm-tree seafront also called Foinikoudes as well as the Church of Saint Lazarus, Hala Sultan Tekke, Kamares Aqueduct, and Larnaca Castle. It is built on the ruins of ancient Citium, which was the birthplace of Stoic philosopher Zeno. Larnaca is home to the country’s primary airport, Larnaca International Airport. It also has a seaport and a marina.

Larnaca’s port accommodates small craft at dockside; larger ships anchor in the roadstead and are served by lighters (barges) or use two floating pontoons completed in 1977. Potatoes and cement are exported through Larnaca. A developing industrial base includes a tannery, an oil refinery, a cooperative cheese factory, and the production of commercial salt, brooms, processed food, and chemicals. The town is linked by roads with Dhekelia, Pano Kophinou, and Mazotos. Larnaca International Airport has expanded since opening as a temporary facility in 1974 after the closing of the international airport at Nicosia.

The bustling town has much to offer for a variety of travelers. History buffs will enjoy storming castles and feasting their eyes upon a 9th-century church, said to be the final resting place of Lazarus!

Thrill-seekers will be in awe of some incredible scuba diving. As the MS Zenobia, a shipwreck that rests in Larnaca Bay is said to be one of the best wreck dives in the Mediterranean.

The word Larnaca (also spelled as Larnaka) derives from the Greek n. larnax, meaning: “coffer”, “box”, “chest”, e.g. for household stores, “cinerary urn”, “sarcophagus” or “coffin”; “drinking trough” and “chalice”. An informal etymology attributes the origin of the name to (sarcophagi) that were found in the area. Sophocles Hadjisavvas, a state archeologist, states that “(the city’s U.S.) consul of the last quarter of the 19th century, claimed to have explored more than 3,000 tombs in the area of Larnaca, so-called after the immense number of sarcophagi found in the modern town”. 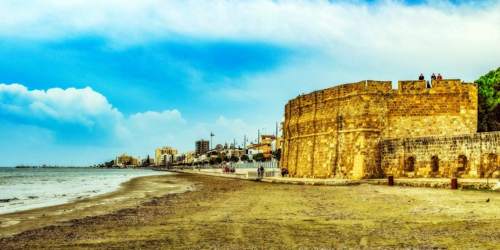 In ancient times Larnaca was known as Kition as it is believed that Noah’s grandson, Khittim, established the first settlement about 6000 years ago. The modern name of the city; which means coffins in Greek (‘Larnax’) was derived because of the many burial sites found on Kition settlements. While other settlements in Cyprus were abandoned later, Larnaca developed into a city because of its ancestors who inhabited it continuously.

Archaeologically, the earliest remains trace Larnaca to the Mycenaean age. Once, it was a major colony for the Phoenician rulers, but it achieved its true status during the Hellenistic Age. The Mycenaean Greeks formed the Kition Kingdom in 13th century B.C. during which it was a major port and a trader in copper. The prosperity of the Kingdom can be viewed through the excavations of Cyclopean walls and Mycenaean temples.

Strong earthquakes hit the city in 76 AD and the year after. Earthquakes of 322 AD and 342 “caused the destruction not only of Kition but also of Salamis and Pafos”. Kition’s harbor silted up, and the population moved to the seafront farther south, sometime after this. (Contributing factors to the silting are thought to have been earthquakes, deforestation, and overgrazing.)

The commercial port was located at Skala, during the Ottoman Period. Skala is the name of the seashore immediately south of the Larnaca castle and its neighborhood. The city is sometimes colloquially referred to as “Skala” (Greek: Σκάλα) meaning “ladder” or “landing stage”, referring to the historical port.

The Kamares aqueduct was built in 1747 bringing water to the city from a source around six miles (9.7 km) from the city.

Due to its prime location in the Mediterranean region, Larnaca has always attracted a lot of external rulers. Cyprus has been at the mercy of many conquerors, be it the Greeks, Persians, Egyptians, Romans, Byzantines, Ottomans, Franks, Venetians, Turks or British rulers. The main reason for invading the city of Larnaca was due to its location as a port as well as its richness in minerals and other resources.

Though many rulers attacked Larnaca, one of the most important ones were the Byzantines. Historically they left behind many remains and monuments such as Basilica of Saint Lazarus. During this time the city enjoyed stability and prospered as they traded with the rest of Europe.

When the Ottomans landed in Larnaca, the port basked in the glory of being an important diplomatic and commercial center of Cyprus.

The British who ruled Cyprus for about eighty-two years first landed in Larnaca. It was during their rule that the port developed its own distinct identity in modern Cyprus as it developed very fast. This lasted till the Turks attacked Cyprus in 1974, where it won and Larnaca alone welcomed 40,000 refugees. 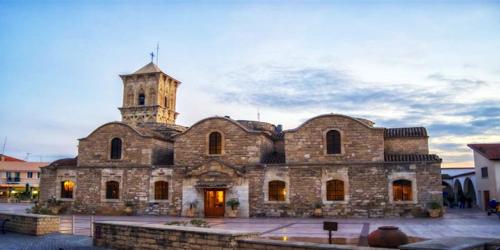 The Salt Lake fills with water during the winter season and is visited by flocks of flamingoes who stay there from November until the end of March. It usually dries up in the summer. In the past, it yielded good quality salt scraped from the dried surface. The salt from the lake is now considered unsuitable for consumption.

The city also hosts a commercial port. The district of Larnaca is one of the six districts of Cyprus. Troodos is the biggest mountain range that stretches across this southern part of Cyprus. Larnaca with a metro population 144,200 (in 2015) is the third-largest city of Cyprus.

The climate in this area is described by the Köppen Climate Classification System as a hot semi-arid climate (BSh) due to its low annual rainfall and strong summer drought. It is sometimes described as a Mediterranean climate, but its winter rainfall is below the required amount to avoid the semi-arid classification.

Cyprus measures just 240 km in length and 100 km in width. The climate of Larnaca is the same as the climate all over Cyprus. The climate is typically Mediterranean and has significant differences in the seasons. Summers are very joyful with warm and dry weather and the winters are rainy and mild. Tourists can enjoy long hot summers from mid–May to mid–October and short dry winters from December to February, separated by short autumn and spring seasons. The beaches of Cyprus are among the cleanest and safest in the Mediterranean Sea with an average annual temperature of 20°C (68°F) for the whole island.

Larnaca’s economy has been growing since 1975, after the loss of the Port of Famagusta, which handled 80% of general cargo, and the closure of Nicosia International Airport meant that Larnaca’s airport and seaport had increasingly important roles in the economy of the island. A €650m upgrade of Larnaca Airport has been completed.

The economy of the island is mostly dependable on the services sector, trade, tourism, education, agriculture, and light manufacturing sectors. Though it is affected by some factors like lack of investments, high freight costs, and a shortage of skilled laborers. The main industries include import-export of agricultural products, poultry business, fishing, and manufacturing of clothing and footwear. Some industrial sectors like processed foods and beverages, paper, chemicals, textiles, metal products, and refined petroleum also provide strong support to the country’s economy.

Nowadays, tourism business plays a vital role in contributing to the economy of Cyprus. The tourist inflow to Cyprus is showing gradual growth from all parts of Europe. The United Kingdom is the main source of tourist traffic. In 2003, around 13% of Cyprus’ gainfully employed population was connected with the tourism industry. 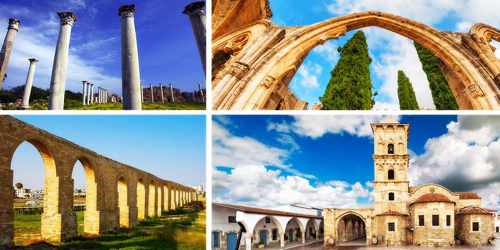 Larnaca is known for its schools, which include the American Academy (1908). According to tradition, Lazarus of Bethany settled there after his resurrection and became its first bishop; the chief church bears his name. Artifacts from archaeological excavations in the area are displayed in the regional museum housed in an Ottoman fortress erected in 1625.

The surrounding region is largely agricultural. Crops include wheat, barley, potatoes, fruits, vegetables, and nuts. The industry is based mainly on agricultural produce and includes milled flour, canned fruit and vegetables, and beverages. Salt is extracted, and copper and gypsum are mined at Kalavasos to the west.

It is believed that Larnaca has a continuous history extending for 4000 years. After Roman times the city became the main port of the island.

Today, the locals of Larnaca have developed a modern outlook whilst still maintaining many traditions and upholding their hospitality and welcoming attitude towards visitors. The city is well known for its beautiful clean beaches, great food, and vibrant nightlife.