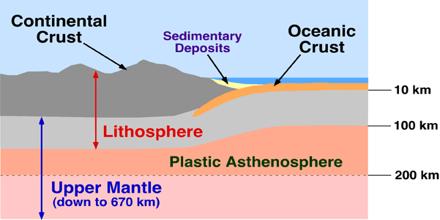 This lecture introduce on Lithosphere. The lithosphere is the solid, rocky crust covering the Earth. It covers the surface of earth from the top of Mount Everest to the bottom of the Mariana Trench. It is divided into a lot of crustal plates that is what a plate tectonic is. The phenomena connected with volcanoes and volcanic activity is what volcanism is. A series of movement in the Earth’s crust is an earthquake. The lateral movement of continents resulting from the motion of crustal plates is the continental drift.