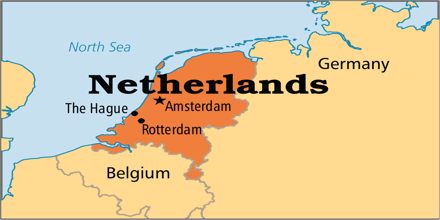 The Netherlands, also known as Holland. The Netherlands is a small country sandwiched between Belgium and Germany in Western Europe. The North Sea, located to the north and west of the Netherlands, is continually battering the land. It is the most densely populated country in the European Union. Animals have had to squeeze into changing habitats around the dams, dikes, and canals. The government has created sanctuaries to allow plants, birds, and small animals to thrive.