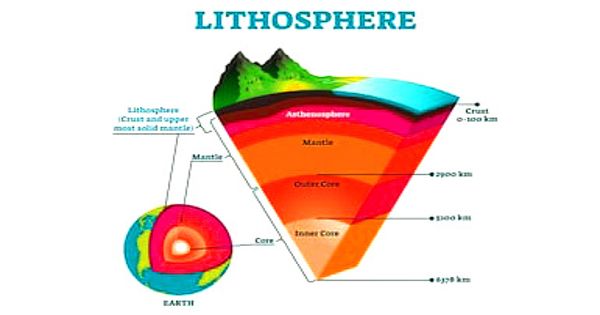 The lithosphere is the rocky outer part of the Earth. It is thinnest at mid-ocean ridges, where tectonic plates are tearing apart from each other.

The lithosphere is the outer part of the solid earth composed of rock essentially like that exposed at the surface, consisting of the crust and outermost layer of the mantle, and usually considered to be about 60 miles (100 kilometers) in thickness. It includes the brittle upper portion of the mantle and the crust, the outermost layers of Earth’s structure. It is broken into about a dozen separate, rigid blocks, or plates. It is bounded by the atmosphere above and the asthenosphere (another part of the upper mantle) below. 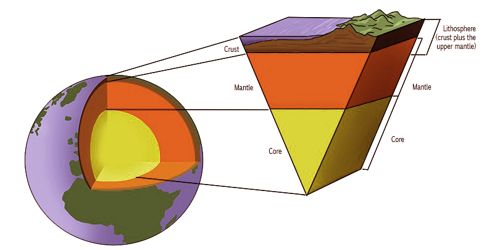 The Lithosphere includes the crust and the upper mantle

The lithosphere is the coolest and most rigid part of the Earth. Slow convection currents deep within the mantle, generated by radioactive heating of the interior, are believed to cause the lateral movements of the plates (and the continents that rest on top of them) at a rate of several inches per year. The lithosphere is about 100 km thick, although its thickness is age-dependent (the older lithosphere is thicker). The lithosphere below the crust is brittle enough at some locations to produce earthquakes by faulting, such as within a subducted oceanic plate. The crust overlying the lithospheric mantle is either of an oceanic type which is mainly composed of gabbroic and basaltic rocks resulting in a mean density of 3.0 g/cm3, or of continental type with a gabbroic/granulitic layer at its base and a variety of rock types in the upper part formed by magmatic differentiation, metamorphism, etc.