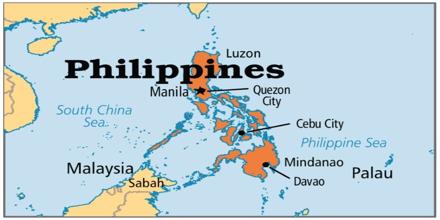 Location of Philippines; East: china sea; South: china sea; Pacific ocean and Atlantic ocean. The Philippines became an independent state in 1946, after gaining its sovereignty from Spain. The population of The Philippines is 103,775,002 (2012) and the nation has a density of 348 people per square kilometer. Philippines is one of the more intriguing places in the world. There is a vast variety of tropical food together with culture, climate, people, history, language and of course geographical location.