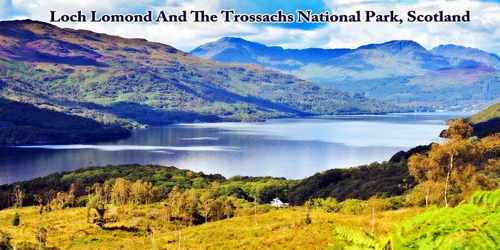 Loch Lomond and The Trossachs National Park (Scottish Gaelic: Pàirc Nàiseanta Loch Laomainn is nan Tròisichean) is Scotland’s first National Park and was established in the year 2002. With a size of 720 square miles (1,865 sq km) the Park covers many contrasting landscapes reaching from Lowland to Highland. The park consists of many mountains and lochs, and the principal attractions are scenery, walking, and wildlife. Every year thousands of visitors enjoy the beauty of the National Park with its lochs, rivers, woodlands, mountains, and historical sites.

Centered around the large lake, Loch Lomond, this national park offers guests the kind of scenery that Scotland is famous for. Not only can visitors get out on the waters of Loch Lomond for a gentle cruise or to kayak and jetski, it’s a great spot for fishing as well. The scenery isn’t half bad either, with dozens of islands on the loch and the craggy images of Ben Lomond and the Arrochar Alps looming nearby. As for the Trossachs, that’s a Scottish name for the highlands, and their compelling jumble of hills, lochs, and forest is made for hiking or cycling.

The park is the fourth largest in the British Isles, with a total area of 1,865 km2 (720 sq mi) and a boundary of some 350 km (220 mi) in length. It includes 21 Munros (including Ben Lomond, Ben Lui, Beinn Challuim, Ben More and two peaks called Ben Vorlich) and 20 Corbetts. There are two forest parks (Queen Elizabeth Forest Park and Argyll Forest Park), and two national nature reserves (NNR) (Loch Lomond National Nature Reserve and The Great Trossachs Forest National Nature Reserve) within the National Park. The Loch Lomond NNR is managed by Scottish Natural Heritage (SNH), and The Great Trossachs Forest by a partnership of Forestry and Land Scotland, RSPB Scotland, and Woodland Trust Scotland. 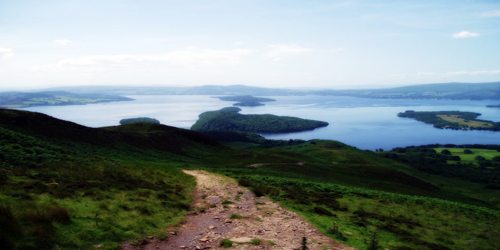 The park straddles the Highland Boundary Fault which divides it into two distinct regions lowland and highland which differ in underlying geology, soil types, and topography. The change in rock type can most clearly be seen at Loch Lomond itself, as the fault runs across the islands of Inchmurrin, Creinch, Torrinch, and Inchcailloch and over the ridge of Conic Hill. To the south lie green fields and cultivated land; to the north, mountains.

The Trossachs are an area of wooded hills, glens, and lochs that lie to the east of Loch Lomond. The name was originally applied only to a small woodland glen that lies at the center of the area but is now generally applied to the wider region. They have long been visited by tourists due the relative proximity of major population centers such as Glasgow and Stirling, and the area remains popular with walkers, cyclists, and tourists. The wooded hills and lochs of the area may be considered to represent a microcosm of a typical highland landscape, and the woodlands are an important habitat for many species. Much of the Trossachs area is protected by various different conservation designations, including the “Great Trossachs Forest” national nature reserve.

History of the park –

For those who are interested in the history of the National Park, there are many towns and villages with historical buildings and places to visit. Luss is a lovely conservation village which was the location of a popular TV series and has some fine churches and charming streets. It’s possible to take a sail on Loch Lomond from here and many other piers around the loch. The City of Stirling is to the east of the Park and has many interesting attractions such as the Old Town Jail, Stirling Castle and the Wallace Monument.

One of the most popular attractions in the Heart of the Trossachs is the SS Walter Scott: stream ship on Loch Katrine which is by far one of the most scenic lochs in Scotland. The ship sails twice daily in the Summer and is well worth a visit. It is also possible to take a visitor’s bicycle onto the ship and cycle back from Stronachlacher after a visit to the Pier Cafe.

Experience the traditional Scottish hospitality and enjoy Scotland’s most famous drink, whiskey, the water of life, by visiting a distillery such as the Glengoyne Distillery or from one of the hotels and bars on the whiskey lovers trail. 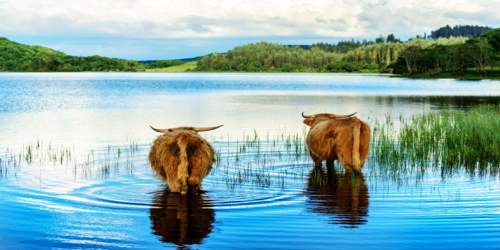 Over 200 species of birds and over 25% of all the species of plants known to occur in Britain have been recorded in the national park. The park is home to many of the species most associated with the Scottish highlands, including capercaillie, red deer, red squirrel, Scottish wildcat, golden eagle, peregrine falcon, black grouse, buzzard, geese and osprey. Beavers are also now present in the park, with signs of beaver activity being observed on Loch Achray in the Trossachs during a survey undertaken over the winter of 2017-18; the beavers are assumed to have spread there from the existing population on the River Tay. A colony of wallabies has lived on Inchconnachan, an island in Loch Lomond, since 1940.

The marine and coastal environment is home to many different species. Loch Lomond and many other lochs and rivers have a large number of fish perfect for a great angling experience. Loch Long and Loch Goil are seawater lochs where visitors can find seals and even porpoises. Not only the lochs are interesting for wildlife spotting. Throughout the whole park, many different bird species including a bird of prey can be seen. The capercaillie is one of the iconic animals in the National Park and fascinates many visitors. Other wildlife in the Park includes deer, squirrels, badgers, hedgehogs, bats, and many more.

The national park is classified as a Category v protected area by the International Union for Conservation of Nature. In total 67 sites within the park hold some form of conservation designation for their natural heritage value, including 8 Special Areas of Conservation (SAC) and 2 Special Protection Areas (SPA). Two of Scotland’s national scenic areas are wholly within the national park: the Loch Lomond NSA and the Trossachs NSA. Additionally, the westernmost part of the River Earn (Comrie to St Fillans) NSA lies within the park’s boundaries.

There are 21 Munros (mountains over 3,000 feet (914 m)) in the National Park, of which 16 are within the Breadalbane section of the park. Ben Lomond is the most frequently climbed mountain in Scotland.