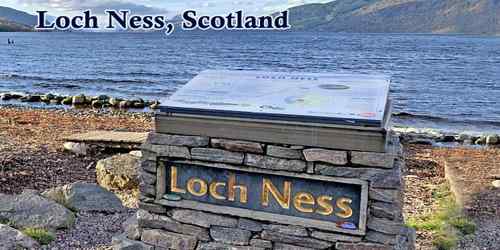 “Loch Ness” (/ˌlɒx ˈnɛs/; Scottish Gaelic: Loch Nis [l̪ˠɔx ˈniʃ]) is one of Scotland’s best-known attractions; it is large, with a depth of 788 feet (240 meters), freshwater loch in the Scottish Highlands extending for approximately 37 kilometers (23 miles) southwest of Inverness. Its surface is 16 meters (52 feet) above sea level. It lies in the Glen Mor or Great Glen, which bisects the Highlands and forms part of the system of waterways across Scotland that civil engineer Thomas Telford linked by means of the Caledonian Canal (opened 1822). 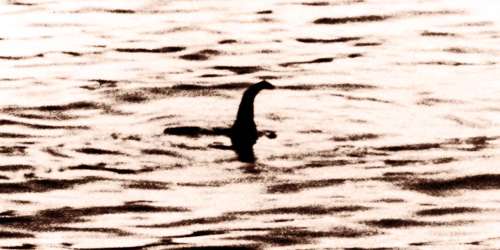 Loch Ness is best known for alleged sightings of the cryptozoological Loch Ness Monster, also known affectionately as “Nessie”, which was first “sighted” in 1933 when a newspaper article dismissed the disturbance of the water’s surface as a duck fight. It is connected at the southern end by the River Oich and a section of the Caledonian Canal to Loch Oich. An infamous 1934 photo of the long-necked creature was later admitted to be a hoax. The latest theories suggest “Nessie” may be a giant eel or a tangle of fallen branches.

Loch Ness lies along the Great Glen Fault, which forms a line of weakness in the rocks which have been excavated by glacial erosion, forming the Great Glen and the basins of Loch Lochy, Loch Oich, and Loch Ness.

The watershed of Loch Ness covers more than 700 square miles (1,800 square km) and comprises several rivers, including the Oich and the Enrick. Its outlet is the River Ness, which flows into the Moray Firth at Inverness. Seiches (surface oscillations), caused by differential heating, are common on the loch. The sharp rise and fall of the level of the loch is one reason for the scanty flora of the waters; another reason is the great depths of the loch near the shoreline. The abyssal fauna is also sparse.

Loch Ness is the second largest Scottish loch by surface area at 56 km2 (22 sq mi) after Loch Lomond, but due to its great depth, it is the largest by volume in the British Isles. Its deepest point is 230 m (126 fathoms; 755 ft), making it the second deepest loch in Scotland after Loch Morar. A 2016 survey claimed to have discovered a crevice that pushed the depth to 271 m (889 ft) but further research determined it to be a sonar anomaly. It contains more freshwater than all the lakes in England and Wales combined and is the largest body of water in the Great Glen, which runs from Inverness in the north to Fort William in the south.

The Loch Ness 360° Trail is an epic walking, cycling, running and outdoor activity trail in the Scottish Highlands. The trail loops the entire circumference of Loch Ness. People can start and finish in the Highland Capital of Inverness, or join the trail at any point of their choice.

This trail connects the Great Glen Way and the South Loch Ness Trail into one circuit around the loch. Covering some 80 miles, it’s so much more than just a trail and a cycle route. The LN360° Trail is one of the great new walking and bike trails in Scotland!

Like some other very deep lochs in Scotland and Scandinavia, Loch Ness is said to be inhabited by an aquatic monster. Many sightings of the so-called Loch Ness monster have been reported, and the possibility of its existence perhaps in the form of a solitary survivor of the long-extinct plesiosaurs continues to intrigue many.

Loch Ness has one island, Cherry Island, at the southwestern end of the loch, near Fort Augustus. It is an artificial island, known as a crannog, and was probably constructed during the Iron Age. There was formerly a second island (Dog Island) which was submerged when the water level was raised during the construction of the Caledonian Canal.

Loch Ness serves as the lower storage reservoir for the Foyers pumped-storage hydroelectric scheme, which was the first of its kind in the United Kingdom. The turbines were originally used to provide power for a nearby aluminum smelting plant, but now electricity is generated and supplied to the National Grid. Another scheme, the 100 megawatts Glendoe Hydro Scheme near Fort Augustus, began generation in June 2009. It was out of service between 2009 and 2012 for the repair of the tunnels connecting the reservoir to the turbines.