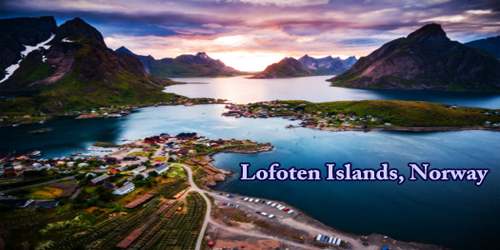 Lofoten (Norwegian pronunciation: ˈlùːfuːtn̩) island group, in the Norwegian Sea, northern Norway. It is known for excellent fishing, nature attractions such as the northern lights and the midnight sun, and small villages off the beaten track. Lofoten is known for its distinctive scenery with dramatic mountains and peaks, open sea and sheltered bays, beaches, and untouched lands. Its largest town, Leknes, lies approximately 169 km inside the Arctic Circle, or approximately 2,420 km away from the North Pole, thus making Lofoten one of the world’s northernmost populated regions. 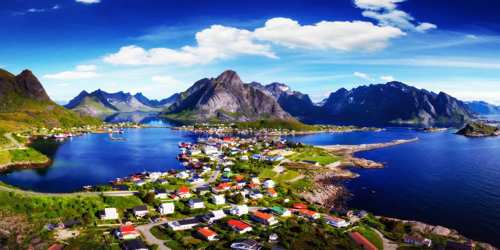 Lying off the mainland entirely within the Arctic Circle, the group comprises the southern end of the Lofoten-Vesterålen archipelago and includes five main islands (Austvågøya, Gimsøya, Vestvågøya, Flakstadøya, and Moskenesøya) extending about 70 miles (110 km) from north to south. In addition, there are many small islands and skerries (rocky islets and reefs). The total length of the archipelago is about 110 miles (175 km). A broad and deep fjord, the Vesterålsfjorden, lies between Lofoten and the mainland.

Nestled at the top of Europe and protecting Scandinavia from the ravages of the sea is the gem that is Norway, a country with one of the most spectacular and rugged coastlines in the world. Norway is a country with natural extremes such as Preikestolen (Pulpit Rock) and Kjeragbolten. The coastline of the country is staggering and breathtaking, but it culminates in the Lofoten Islands.

There have been settlements here for over 11,000 years, which means that the islands are steeped in history they even have working Viking longboats in the museum! It is a mystical place famous for stockfish (dried cod), fishing villages perched on piers, and rising rock formations where you can jump between peaks.

Lofoten (Old Norse: Lófót) was the original name of the island Vestvågøya. The first element is ló (i.e., “lynx”) and the last element is derived from Norse fótr (i.e., “foot”), as the shape of the island must have been compared with that of a lynx’s foot. (The old name of the neighboring island Flakstadøya was Vargfót, “wolf’s foot”, from vargr “wolf”.)

The islands, composed of volcanic rocks (gneiss and granite), are the highly eroded tops of a partially submerged mountain range. The highest peak is Higravtinden (3,760 feet (1,146 meters)) on Austvågøya. North of the Arctic Circle, the islands are washed by the warm North Atlantic Current, which tempers their climate.

Lofoten has a strong connection to the Viking Age, and at Lofotr Viking Museum you can experience the Viking Age as it really was. At Borg, archaeologists have discovered the largest Viking longhouse ever found from this era. The building is 83 meters long and has been reconstructed as a living museum.

Due to the warm Gulf Stream, Lofoten has a much milder climate than other parts of the world at the same latitude. Between late May and mid-July visitors or travelers can experience the midnight sun, whilst the northern lights can be viewed from September to mid-April.

There is evidence of human settlement extending back at least 11,000 years in Lofoten, and the earliest archaeological sites are only about 5,500 years old, at the transition from the early to late Stone Age. Iron Age agriculture, livestock, and significant human habitation can be traced back to c. 250 BC. In March 1941 the islands were raided by British Commandos during Operation Claymore, and in a subsequent diversionary attack to support the Vaagso raid in December. As of 2017, the islands attract one million tourists a year.

Fishing has always been predominant, and until the late 19th century, when tourists arrived on the islands, it was almost the only economic activity. Cod, along with some haddock, are the principal catch. Local industries are related to fishing (cod-liver-oil processing and fertilizer manufacture from fish parts). Some potatoes and berries are grown, but the scanty soils will not support even the hardiest grains. 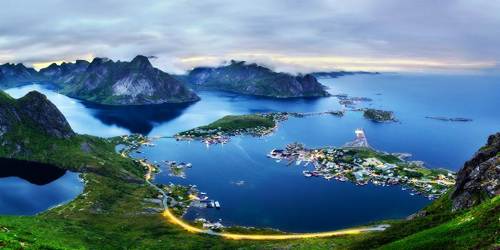 The rapidly changing weather and magnificent light conditions have inspired artists and drawn them to this area for several decades, which is evident in the many art galleries and photo exhibitions. The sea around Lofoten is known to host significant oil reserves. The reserves amount to 1.3 bn barrels. Oil extraction in the Lofoten area is however prohibited. Lofoten has a high density of sea eagles and cormorants, and millions of other sea birds, among them the colorful puffin. It has mainland Europe’s largest seabird colony. Otters are common, and there are moose on the largest islands. There are some woodlands with downy birch and rowan. There are no native conifer forests in Lofoten, but some small areas with private spruce plantations. Sorbus hybrida (Rowan whitebeam) and Malus sylvestris occur in Lofoten, but not further north. The animals mistaken for the extinct great auk turned out to be some of the nine king penguins released around Norway’s Lofoten Islands in August 1936, there until at least 1944.

Svolvær, on Austvågøya, is the chief town and main port of the islands. Between Moskenesøya and the islet of Mosken flows the famed Moskenstraumen tidal channel, also called the Maelstrom, with its treacherous reversing currents. Many artists come to the Lofoten group to depict the highly scenic landscapes; the famed Norwegian painter Gunnar Berg (1863–93) was born in Svolvær. The Norwegian novelist Johan Bojer described the Lofoten fisheries at the end of the 19th century in Den siste viking (1921; Last of the Vikings, 1923).