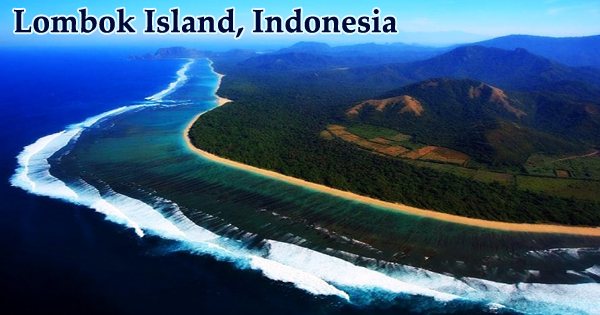 Lombok is an Indonesian island located in the West Nusa Tenggara province (Nusa Tenggara Barat provinsi). It is one of the Lesser Sunda Islands, located between Bali and Sumbawa across the Lombok Strait and the Alas Strait. Lombok is now much more than simply a surfers’ paradise, as seductive, beach-blessed, and plain wonderful as its nearby neighbor Bali. It’s essentially round in shape, with a “tail” to the southwest, and is around 70 kilometers (43 miles) in diameter with a total size of 4,738.65 square kilometers (1,829.60 square miles). The Java Sea is to the north, and the Indian Ocean is to the south; Mataram is the province capital and main city on the island.

This varied succession of bays, reefs, and rocky inlets, stretching from Desert Point in the west to Ekas in the east, delivers the most quantity and quality of breaks in Lombok. Lombok is similar in size and population to the neighboring island of Bali to the west, and they share some cultural heritage. Unlike Bali, where surfing is best from April to October, Lombok’s waves are usually at their greatest during the rainy season (roughly November to March). The obvious base for wave-chasing is Kuta, which is about halfway along the coast.

The island is divided into four kabupaten (regencies) and one kota for administrative purposes (city). Two mountain chains run virtually the entire length of the island, which covers 2,098 square miles (5,435 square kilometers). The southern chain, a range of limestone hills, reaches an elevation of 2,350 feet (716 metres), but the northern chain rises to Mount Rinjani (12,224 feet (3,726 metres)). The climate of Lombok is tropical. 12-hour days, average temperatures of 28°C – 34°C (83°F – 93°F) all year, and two distinct seasons, wet (October to March) and dry (April to September) (May to September). Expect hot, humid weather and a refreshing sea breeze, as this is a tropical destination.

“Lombok Mirah” was referenced in the 14th century Majapahit book Nagarakretagama canto 14 as one of the islands under Majapahit suzerainty. Little is known about Lombok before the seventeenth century, with the exception of the Babad Lombok manuscript, which describes the 1257 Samalas eruption. There are no small rivers that can be navigated. Cliffs rise abruptly from the sea, while coves on the western and eastern shores provide ideal anchorages. Lombok is a paradise with a spice of adventure and a dash of exoticism, complete with gorgeous waterfalls and Mount Rijani, a volcano.

A Japanese invasion force comprised of parts of the 2nd Southern Expeditionary Fleet invaded and seized the Lesser Sunda Islands, including the island of Lombok, during World War II. The island was quickly captured once the Dutch forces were defeated. The margin of the Asian continental shelf has been dubbed Lombok Strait, which has depths surpassing 3,600 feet (1,100 meters), a claim backed up by the stark variations in plant and animal life between Bali and Lombok. The earthquake that struck Lombok Island in July 2018 killed 20 people and injured hundreds more. It caused substantial damage to the island and was the foreshock of a larger earthquake that struck eight days later.

The majority of the sites here are natural beauties due to the absence of development on the island. The Gili Islands give a taste of abandoned tropical lifestyle, where horse-drawn carts provide an environmentally beneficial alternative to motorbikes and cars. Mount Rinjani, an active volcano that stands over the island’s fertile plains, is Lombok’s most visible feature. The Alas Strait, which separates the island of Lombok from the neighbouring island of Sumbawa, is located to the east of Lombok.

Taking a guided fishing trip is a less considered way to enjoy Lombok’s marine richness. Whether tourists/visitors choose a traditional outrigger boat or a modern sport-fishing outfit with larger boats and a better safety record, they may anticipate bottom and deep-sea fishing for tuna, trevally, barracuda, mackerel, and a variety of other species. Lombok’s highlands are primarily underdeveloped and covered in forest. The lowlands are heavily farmed. Rice, soybeans, coffee, tobacco, cotton, cinnamon, cacao, cloves, cassava, corn, coconuts, copra, bananas, and vanilla are some of the most important crops farmed on the island’s fertile soils. The southern half of the island, especially along the southern shore, is rich but dryer.

There has been some cross-pollination of species, and Lombok has become the start of a transitional zone where Asian forms of life are gradually being superseded by Australian forms. The fine sand and bliss-inducing desert island aspect of Lombok’s beaches are generally acclaimed, and there are plenty of crowd-free lengths to pick from. Rinjani is not just Indonesia’s second highest peak, but it’s also an active volcano. A walk to its top, which stands at 3,726 meters above sea level, is a fantastic multi-day adventure that also includes a visit to the crescent-shaped crater lake Segara Anak.

The island is peppered with charming villages making complex products using generations-old handcraft skills, while the predominant type of architecture can be seen in the temples and mosques that serve the island’s two religions, Islam and Hinduism. The water supply in Lombok is depleted, putting a pressure on the water supply in Mataram, the provincial capital, as well as the rest of the island. The most severely impacted areas are said to be in the south and central parts of the country. Enormous green pigeons, eight species of kingfishers, ground thrushes, grass-green doves, little red and black flower-peckers, large black cuckoos, king crows, golden orioles, and magnificent jungle cocks are among the island’s rich birdlife.

Due to poor rainfall and a lack of water supplies, areas in southern Lombok Island have been designated as dry and vulnerable to water shortages. Lombok’s population is primarily made up of Malay Sasaks, while there are some Chinese in the Mataram area, some Balinese in the west, and some Sumbawanese in the east. With reefs, sea walls, and deep waterways encircling the island, there are a variety of places to cast a line, depending on what tourists and visitors are after. Good places include Bangko Bangko (Desert Point), the Lombok Strait to Bali, and off the southern shore of Kuta.

Between the two high coastal sections, the island’s core lowland strip is the epicenter of settlement and rice agriculture. Monkeys, deer, and wild pigs are common creatures, and the vegetation includes a huge palm. The Sasak people of Lombok (who make up 85 percent of the population) are famed throughout Indonesia for their weaving skills, which can be seen up close in traditional villages like Tetebatu and Sade. Volunteer guides accompany visitors through the maze of narrow alleys that meander between the characteristic palm and adobe buildings at Sade, approximately 10 kilometers from Kuta’s major surfing beach, while local women weave yarn as they have for years.

For many of the island’s indigenous people, access to housing, education, and health care remains challenging, despite the fact that public education is free across the province, and elementary schools are attempted to be present in even the most distant places. Despite the wide choice of eating and drinking businesses, Kuta, the heart of Lombok’s backpacking scene, manages to retain its village vibe, providing the area an egalitarian atmosphere where everyone feels welcome. Tourism is an important source of income on Lombok. The island’s most developed tourism region is focused around the settlement of Senggigi on the island’s west coast.

Tiu Kelep is one of Lombok’s most magnificent waterfalls, surrounded by the emerald green vegetation of the island’s north. The cold crystal blue waters plunge 45 meters into a pool suitable for cooling off, an hour’s leisurely stroll through the jungle from the settlement of Senaru. The west coast beach tourism strip stretches for 30 kilometers (19 miles) between Mataram and the old airport at Ampenan, following the coastal road north. The main tourism region stretches from Tanjung in the northwest, at the foot of Mount Rinjani, to the Sire and Medana Peninsulas, as well as the popular Gili Islands off the coast.

Semeti Beach, on the island’s western coast, is known for its volcanic rock formations that run down into the shallows, rather than its excellent sands. Many new luxury hotel and villa complexes are located on the Sire and Medana peninsulars near the Gili islands, as well as a new boating marina at Medana Bay, on the northern west coast near Tanjung. Hikers will enjoy the paths surrounding Tanjung Ringgit, one of Lombok’s top trekking destinations. The road passes through verdant fields and onto low cliffs on the island’s southern approaches.