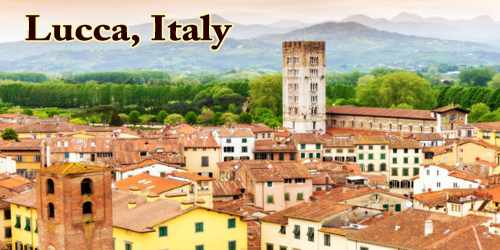 Lucca (/ˈluːkə/ LOO-kə, Italian: ˈlukka) is a city, Toscana (Tuscany) region, Central Italy, on the Serchio, in a fertile plain near the Tyrrhenian Sea. It is the capital of the Province of Lucca. It is famous for its intact Renaissance-era city walls (30 foot-wide). The city lies in the valley of the Serchio River and is almost surrounded by hills, with the Apuan Alps to the north and west. 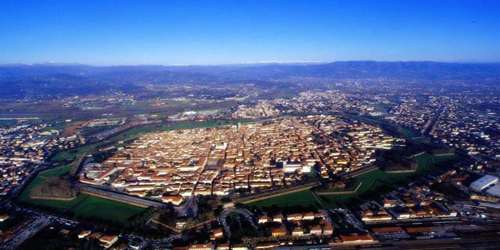 Located at the foot of the Apuan Alps, Lucca is surrounded by rolling hills and awe-inspiring valleys which are full of hidden gems. Although the city can be visited in a day, Lucca makes a perfect base camp for exploring surrounding Tuscan villages on a 2-3-day stop.

Beginning in Roman times, continuing through the Middle Ages, on to the Napoleonic era and finally to the Risorgimento, Lucca’s monuments, churches, palaces, and roads, even its very shape have a story to tell. Each layer blending with preceding ages marking the growth and changes of the city.

Lucca was founded by the Etruscans and became a Roman colony in 180 BC, which accounts for its rectangular street plan. The rectangular Roman plan is preserved in Lucca’s central streets, and remains of the walls, forum, and amphitheater have been found. Lying at the junction of roads to Parma, Florence, Rome, Pisa, and Luni, the town was apparently fairly prosperous and was an early episcopal see. After AD 476 it was ruled successively by the Goths, the Byzantines, and the Lombards, becoming the residence of one of the three Lombard dukes in Tuscany.

During the eighth-tenth centuries, Lucca was a middle of Jewish life, the community being led by the Kalonymos family (which at some point during this point migrated to Germany to become a significant component of proto-Ashkenazic Jewry). Lucca became prosperous through the silk trade that began within the eleventh century and came to rival the silks of Byzantium. During the tenth–eleventh centuries Lucca was the capital of the feudal margraviate of Tuscany, more or less independent but owing nominal allegiance to the Holy Emperor of Rome.

Completely surrounding the ancient city, the walls we see today date back to the 17th century. Now, no longer used for defense, they are crowned by 4 km of green parkland and are a lovely place to walk, cycle or stop for a picnic. Just another example of how, over the centuries, though buildings last, their roles metamorphose as times change.

The city began to lose importance within the late 10th century to Florence, which replaced Lucca because of the Tuscan capital when the house of Canossa succeeded to the margravate. In 1118 the town was granted a charter of liberties, mainly economic, and therefore the commune of Lucca was probably established soon afterward. Despite numerous conflicts with its powerful neighbors and bold noble houses, Lucca largely maintained its independence until it fell to the French in 1799. From 1805 until 1814, Lucca was ruled as a principality by Élisa Baciocchi, a sister of Napoleon. Assigned by the Congress of Vienna (1815) to the Spanish infanta María Luisa, widow of the previous king Louis of Etruria, it passed in 1824 to her son Charles Louis, who ceded it to Tuscany in 1847. It absolutely was united to the dominion of Italy in 1860.

In 1942, during war II, a prisoner-of-war camp was established at the village of Colle di Compecito, within the municipality of Capannori, about 11 kilometers (6.8 mi) from Lucca. Its official number was P.G. (prigionieri di guerra) 60, and it absolutely was usually named as PG 60 Lucca. Although it never had permanent structures and accommodation consisted of tents in a vicinity susceptible to flooding, it housed quite 3,000 British and Commonwealth prisoners of war during the amount of its existence. it absolutely was handed over to the Germans on 10 September 1943, shortly after the signing of the Italian armistice. During the Italian Social Republic, as authorities of the Germans, political prisoners, foreigners, common-law prisoners, and Jews were interned there, and it functioned as a level camp. In June 1944 the prisoners were moved to Bagni di Lucca.

The city’s name has Indo European origins, and was known as Luca, which means “illuminated glade”. Originally marshy terrain, it was well situated, close to the river Serchio, infertile land, and inhabited by the Ligures. Some must-see things in Lucca include the oval-shaped Piazza dell’Anfiteatro, the 12th-century church of Saints Giovanni and Reparata, several well-preserved villas and towers, and of course, no visit is complete without circumnavigating (by either foot or bike) the city’s four-kilometer long wall.

A road and rail center, the city is the market town of a rich agricultural region that exports high-quality olive oil. Silk has been manufactured since about the end of the 11th century. Other industries include flour milling and the production of tobacco, paper, textiles, jute goods, and wine. The Serchio is used for waterpower, and an aqueduct (1823–32) carries the water supply from the Pisan Mountains.

Lucca is the birthplace of composers Giacomo Puccini (La Bohème and Madama Butterfly), Nicolao Dorati, Francesco Geminiani, Gioseffo Guami, Luigi Boccherini, and Alfredo Catalani. It is also the birthplace of artist Benedetto Brandimarte. Since 2004, Lucca is home to IMT Lucca, a public research institution and a selective graduate school and part of the Superior Graduate Schools in Italy (Grandes écoles). The charming, perfectly preserved medieval town of Barga, with its splendid Duomo on a mountain top, offers a fantastic view in every direction.