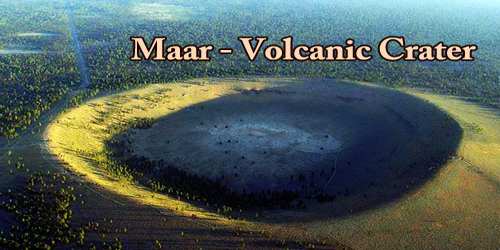 A maar is a broad, low-relief volcanic crater with steep sides that is surrounded by tephra deposits. The tephra deposits are thickest near the crater and decrease with distance from the crater. The crater floor of a maar is usually below the original ground surface. After the eruption, an inflow of groundwater often turns the crater into a shallow lake.

A maar is formed by one or more underground explosions that occur when hot magma comes into contact with shallow groundwater to produce a violent steam explosion. These explosions crush the overlying rocks and launch them into the air along with steam, water, ash, and magmatic material. The materials usually travel straight up into the air and fall back to Earth to form the tephra deposits that surround the crater. If the tephra lithifies, it will become an igneous rock known as tuff.

The name comes from a Moselle Franconian dialect word used for the circular lakes of the Daun area of Germany. Maars are shallow, flat-floored craters that scientists interpret as having formed above diatremes as a result of a violent expansion of magmatic gas or steam; deep erosion of a maar presumably would expose a diatreme. Maars range in size from 60 to 8,000 m (200 to 26,250 ft) across and from 10 to 200 m (33 to 656 ft) deep; most maars commonly filled with water to form natural lakes. Most maars have low rims composed of a mixture of loose fragments of volcanic rocks and rocks torn from the walls of the diatreme.

Most maars are a few hundred to a thousand meters in diameter and less than one hundred meters in depth. The largest maars in the world are the Espenberg Maars on the Seward Peninsula of Alaska. These maars are up to 8000 meters across and up to 300 meters in depth. They were formed during the Pleistocene when ascending basaltic magma encountered frozen permafrost. It is believed that a slow but sustained supply of water from the permafrost contributed to the enormous size of these maars.

Maar Lakes and Dry Maars – Maar lakes, also referred to simply as maars, occur when groundwater or precipitation fills the funnel-shaped and usually round hollow of the maar depression formed by volcanic explosions. Examples of these types of maar are the three maars at Daun in the Eifel Mountains of Germany.

A dry maar results when a maar lake dries out becomes aggraded or silted up. An example of the latter is the Eckfelder Maar. Near Steffeln is the Eichholzmaar (also called the Gussweiher) which has dried out during the last century and is being renaturalized into a maar. In some cases, the underlying rock is so porous that maar lakes are unable to form. After winters of heavy snow and rainfall, many dry maars fill partially and temporarily with water; others contain small bogs or often artificial ponds that, however, only occupy part of the hollow.

Common Maars – Maars are more numerous than most people realize. After cinder cones, maars are the second most common volcanic landform. If we search for the Smithsonian Institution’s Global Volcanism Program database, we will be able to find hundreds of maars.

Maars are underrepresented as volcanic landscape features because they are small in size and lack rocky vertical development that would make them resistant to weathering and erosion. Because they are relatively small, shallow depressions, they can be easily filled with sediment and not recognized as volcanic features.

Occurrence – Maars can occur anywhere in the world where magma comes in contact with groundwater, and can range in size from 10 meters to 8 km across. They’re surrounded by a low rim composed of loose fragments of volcanic rocks and rocks torn from the ground when the explosive eruption happened. They can be 10 to 200 meters deep.

The largest known maar on Earth is Devil Mountain Maar Lake, located on the northern part of the Seward Peninsula of Alaska. It was produced by a hydromagnetic eruption that occurred about 17,500 years ago. The blast spread tephra over an area of about 2,500 square kilometers. The tephra is several tens of meters thick near the maar and decreases with distance away from the maar. These maars are so large because the magma encountered large regions of permafrost, creating huge explosions.

A maar is related to a tuff ring. In the case of a tuff ring, the crater edge is raised above ground level. An even more dramatic tuff cone can rise up 300 meters above the surroundings. 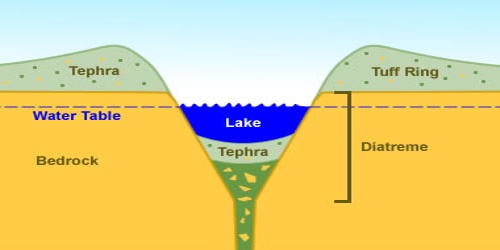 The explosions that form a maar are known as phreatic explosions. They are driven in part by the enormous and instantaneous volume change that occurs when water flashes into steam. When suddenly heated, one cubic meter of water converts into 1,600 cubic meters of steam. If this happens below the Earth’s surface, the result can be a vertical eruption of steam, water, ash, volcanic bombs, and rock debris. The volcanic cones produced by these eruptions are made up mostly of ejecta and are usually of very low relief only a few tens of meters.

Meteor Crater in Arizona was once thought to be a maar, but geologists now know that it was created by a meteor impact about 50,000 years ago.

Maars are usually formed by multiple explosions. Initially, there can be simultaneous explosions at multiple depths. After the initial explosions, groundwater from surrounding lands begins draining towards the crater and fuels additional blasts. These continue until the supply of local groundwater is depleted or the magma source has been depleted or cooled. The 1977 eruption at the East Ukinrek Maar Crater, consisted of a series of explosions that persisted for a period of ten days.

An excellent example of a maar is Zuni Salt Lake in New Mexico, a shallow saline lake that occupies a flat-floored crater about 6,500 ft (2,000 m) across and 400 ft (120 m) deep. Its low rim is composed of loose pieces of basaltic lava and wall rocks (sandstone, shale, limestone) of the underlying diatreme, as well as random chunks of ancient crystalline rocks, blasted upward from great depths. A notable field of maars is found in the Pali-Aike Volcanic Field in Patagonia, South America. and in the Sudanese Bayuda Volcanic Field. The Auckland volcanic field in the urban area of Auckland, New Zealand has several maars, including the readily accessible Lake Pupuke in the North Shore suburb of Takapuna.

One of the most notable craters misidentified as a maar is Arizona’s Meteor Crater; for many years this was thought to be of volcanic rather than meteoric origin.