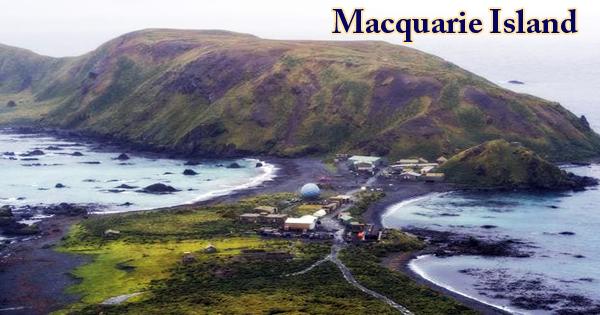 UNESCO World Heritage Site, “Macquarie Island”, subantarctic island, Tasmania, Australia, about 930 miles (1,500 km) southeast of Tasmania’s main island. It became a Tasmanian State Reserve in 1978 and was registered on the World Heritage List in 1997 as a regional part of Oceania and politically a part of Tasmania, Australia, since 1900. Macquarie is a volcanic mass measuring 21 by 2 miles (34 by 3 km) with an area of 47 square miles (123 square km) and a general elevation of 800 feet (240 meters) and has many offshore rocky islets. The island is the exposed crest of the Macquarie Ridge undersea, lifted to its new location where the Pacific plate is met by the Indo-Australian tectonic plate.

During their yearly breeding season, the island is home to the entire royal penguin population. Ecologically, the island is part of the tundra ecoregion of the Subantarctic Islands Antipodes. It is a site of great significance for geo-conservation, being the only location on earth where rocks are continuously exposed above sea level from the earth’s mantle (6 km below the ocean floor). Outstanding examples of pillow basalts and other extrusive rocks include these rare exposures. The Australian Antarctic Division (AAD) has maintained a permanent base at the northern end of the island at the foot of Wireless Hill, the Macquarie Island Station, since 1948. The base population, the only human inhabitants of the island, typically ranges from 20 to 40 people during the year. 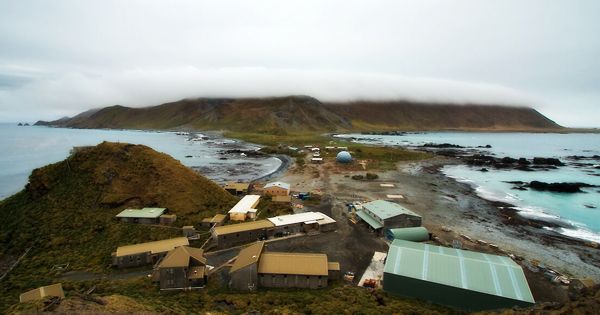 The island is an exposed part of the seabed, the Macquarie Ridge, where the Pacific and Indian-Australian plates meet and is known as the only location in the world where rocks from the Earth’s mantle are actively exposed above sea level as a result of volcanic activity). At its widest point, the main island is approximately 34 kilometers long and 5.5 kilometers wide, covering an area of approximately 12,785 hectares. A region of 557,280 hectares covers the land. Macquarie Island was inscribed on the UNESCO World Heritage List on 5th December 1997 as a significant geo-conservation site, being the only location on earth where rocks from the mantle of the earth are actively exposed above sea level. Some 1,200 to 1,400 feet (365 to 425 meters) of rounded hills rise, and the shore drops steeply down.

An earthquake measuring 8.1 on the current magnitude scale rocked the island on 23rd December 2004 but caused no major damage. There are a number of native forms of vegetation, including grasses and several species of moss, although the island is treeless. A few small glacial lakes are here. The island is almost equidistant from the Australian island state of Tasmania and the Anderson Peninsula of the Antarctic continent (approximately 1,500 km (930 mi) to either point). Macquarie Island meanwhile is roughly 630 km (390 mi) south-east of Auckland Island and 1,300 km (810 mi) north of the Balleny Islands. 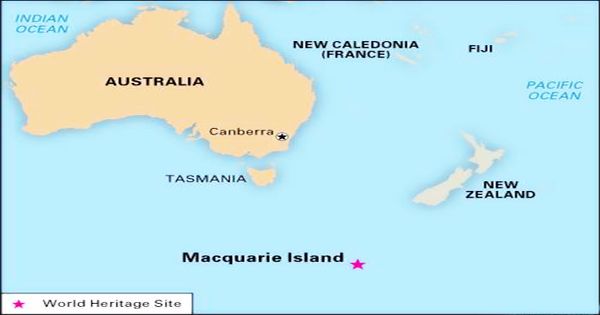 Until 1919, the island was a center for seal hunting. It has no permanent human population, but since 1948, a meteorological and geological research station has been established on the island, and the local flora and fauna have been studied by many botanists and biologists. The climate of Macquarie Island is moderated by the sea and the average temperature is above freezing for all months, while snow is normal between June and October and may also occur in summer. The island is the only known breeding ground for the royal penguin, one of approximately 25 species of birds that breed there. It has a fur seal colony, re-established in 1956 after its near extermination in the 1830s.

Macquarie Island’s geological evolution started 10 million years ago and continues today with earthquakes on the island and a rapid rate of uplift, both of which are attributed to active geological processes along the boundary between the two plates. There is an average of 315.4 days of precipitation annually, 289.4 cloudy days, 55.7 snowy days, and 3.5 clear days. By the early 21st century, much of the indigenous vegetation of Macquarie had vanished. A more holistic plan for the simultaneous eradication of many interdependent species of non-native animals from Macquarie Island was subsequently implemented by the national and Tasmanian governments.

The only ophiolite (a well-developed and studied geological complex) known to have been formed within a major ocean basin is Macquarie Island. Consequently, the geology of the island is known to be the relation between the ophiolites of the continental ecosystems and those within the oceanic crust.