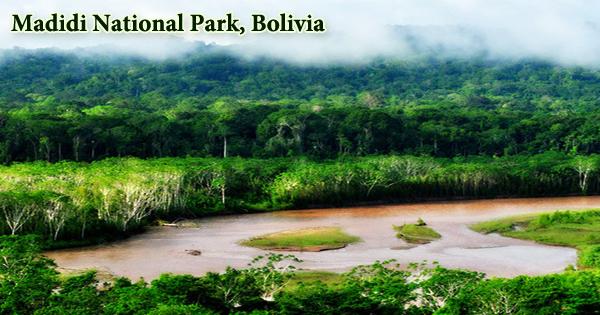 Madidi (Spanish pronunciation: maˈðiði) is a national park in Bolivia’s northeastern region, along the Amazon River’s upper reaches. The park occupies a total area of 7,319.7 square miles (18,958 sq km). Madidi National Park, which opened in 1995, is a jungle paradise with a record-breaking number of species and plants. The park is not only one of the world’s most complex ecological hotspots, but also one of Bolivia’s largest protected areas. Madidi and its neighbors are known as one of the planet’s most biologically diverse areas, ranging from the glacier-covered peaks of the high Andes Mountains to the tropical rainforests of the Tuichi River. Madidi preserves portions of the Bolivian Yungas and Bolivian montane dry forests ecoregions in particular.

The park’s topography is vast and varied, stretching 19,000 square kilometers from the Andes to the Amazon and varying in altitude from 200 to 6000 meters above sea level. The Quechua language is spoken by the locals who have migrated here from the Andean highlands. The Tacanan-speaking Tacana and Ese Ejja, the closely related Tsimané and Mosetén, and the voluntarily separated Toromona all call the park home. Madidi has some of the most stunning scenery in the world, from snowcapped mountains to cloud forests and tropical jungles. Tourists stepping foot into the jungle’s muddy floors after sailing by boat from Rurrenbaque across the Beni river would be enthralled by the variety of flora and fauna on offer.

Despite not being contiguous, Madidi National Park joins Apolobamba, Manurip-Heath, and the Peruvian Manu Biosphere Reserve to form one of the world’s largest protected areas. In and around the Madidi National Park, there are a few ecolodges. Chalalan Ecolodge in Chalalán on the Tuichi River is the oldest and best-known, a prosperous community-based enterprise that offers substantial economic benefits to indigenous communities. Madidi National Park is home to over 20,000 plant species and a range of wildlife species due to its diverse ecoregions.

The Madidi National Park and Integrated Management Natural Area is in the Department of La Paz’s northwest district, in the provinces of Franz Tamayo, Iturralde, and Abel Bautista Saavedra. Apolo, San Buenaventura, Ixiamas, Curva, and Pelechuco are the municipalities involved. The best way to see Madidi National Park is on one of the many ecological and cultural tours that deliver a true jungle experience in a safe setting. This national park has something to offer every nature lover, whether it’s seeing a jaguar, smelling the fragrance of a rare form of herb, learning about different medicinal plants, or listening to the chirps of more than 1000 species of bird.

There are 272 mammalian species, 213 amphibian species, 204 reptile species, 496 fish species, and 1,254 bird species in the wild. Insects, not to be outdone, contribute over 120,000 organisms. The protected area encompasses an altitude range of 180 to 5,760 meters above sea level and contains a number of habitats. Jaguar and cougar sightings are among the most promising predator sightings. Tapir, capybara, red deer, manatee, giant river otters, and pink river dolphins are among the other interesting species. The macaw is one of the most spectacular birds you’ll ever see.

A significant portion of Bolivia’s avian population resides in the park. Madidi is home to over 1100 bird species, accounting for 11% of all bird species on the planet. The alpine zone has a cold climate, while the intermediate elevation regions have a temperate climate, and the northern lowlands have a tropical climate. The winds are mainly from the north, and cold fronts from the south have little impact on the Madidi region’s weather. The austral winter occurs during the dry season. The average annual temperature is 26 degrees Celsius, although this varies widely depending on altitude.

Madidi is also an excellent place to learn about the Amazon’s abundant medicinal plants as well as traditional and sustainable uses of the region’s natural resources. It’s no wonder that Madidi National Park attracts the world’s top biologists, entomologists, and researchers year after year, with so many new species being discovered. Madidi National Park is just a small part of the broader Amazon Rainforest, which covers 2,700,000 square miles (7,000,000 square kilometers).  Brazil is home to about 60% of the world’s rainforest and occupies 40% of the country’s landmass. In addition to the biodiversity found on land, there is a wide variety of life in the sea, including various fish species.

The dry season is the perfect time to visit Madidi National Park. With the cooler weather, this is the time of year when the bulk of the park’s wildlife flocks to the river, trails are less dusty, and mosquitoes are scarce. Those traveling between December and March should be informed that heavy rains are more likely to postpone events and flights. Natural Integrated Management Area and National Park Madidi is home to many Responsible Tourism and Community Ecotourism projects, including the Chalalan Ecolodge, which is operated by the indigenous people of San José de Uchupiamonas and is one of the most well-known locally and internationally.

About 11.6 miles (30 kilometers) of trails in the Chalalan region are dedicated to discovering the diversity with accompanying interpretation. Madid National Park is home to 46 indigenous tribes from around the world. The Quechua and Aymara peoples of Bolivia’s Andean highlands have been migrating to the Madidi region for the past 50 years, vying with indigenous lowland tribes like the Chamas, Maropas, Chimanes, and Tacanas, who have lived in the park’s south and southeast regions for three centuries. The planned Bala Dam Project at the Beni River in the Bala Gorge, where the Beni River breaks through the Bala Mountain Range, has been (and probably still is) one of the threats to the Madidi NP. The dam will flood a vast area, around 2000 square kilometers, including a significant portion of the Madidi National Park, with devastating consequences.

Today, Madidi’s increasing eco-tourism, as well as small commercial projects such as handicrafts, fishing, and agriculture, provide a living for many of the locals. Indigenous peoples use their income not only to enhance their living standards but also to ensure a sustainable future, helping to safeguard the fragile existence of Bolivia’s Amazon.