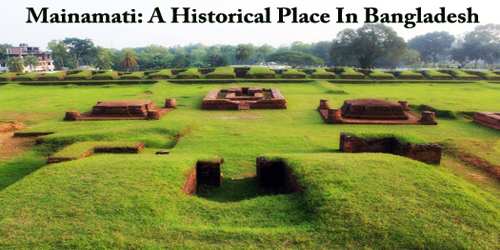 Mainamati: A Historical Place In Bangladesh

Mainamati (Bengali: ময়নামতি Môynamoti), is an isolated ridge of low hills in the eastern margins of deltaic Bangladesh, about 8 km to the west of Comilla town is a very familiar name in our cultural heritage, where archaeological excavations have revealed very significant materials. It serves a beautiful colonial cemetery as Comilla Cantonment is nearby. The Mainamati Cemetery is a historical memorial with about thousands of graves from Second World War.

Mainamati is the home of one of the most important Buddhist archaeological sites in the region. It is named for the Chandra queen of the same name, mother of Govindachandra. Mainamati is 114 kilometers from Dhaka city through National Highway 1 and is nearly 162 kilometers from Chittagong. Also, there is a Buddhist temple beside it.

A landmark of our ancient history, it represents a small mass of quasi-lateritic old alluvium. The ridge, set in the vast expanse of the fertile lower Meghna basin, extends for about 17 km north-south from Mainamati village on the Gumti River to Chandi Mura near the Lalmai railway station. In its widest parts, the ridge is about 4.5 km across and its highest peaks attain a height of about 45 meters. These highlands were once thickly wooded with an abundance of wild life, but modern developments have rudely disturbed its serene and idyllic setting.

The twin names Lalmai- Mainamati of the place have significant link with the past: Lalmai or the southern part is identical with Lalambi-vana of the Chandra epigraphs, while the northern part recalls the name of the legendary Chandra queen ‘Maynamati’, mentioned in local ballads and folk-songs. The archaeological finds have now established beyond any doubt that the cultural and political centre of ancient Vanga-Samatata (southeast Bengal) was located here. The glory and magnitude of that remarkable past is emphatically manifest in the innumerable monuments, mounds and excavated remains, adequately supplemented by an impressive array of stray finds from the area. Mainamati today is, however, better known for its Buddhist remains exposed by excavations. Here, indeed, lies the greatest assemblage of ancient Buddhist remains in Bangladesh.

Shalban Vihara: The centre piece of the Buddhist sites at Mainamati is the Shalban vihara, almost in the middle of the Mainamati-Lalmai hill range consists of 115 cells, built around a spacious courtyard with a cruciform temple in the centre, facing its only gateway complex to the north, resembling that of the Sompur Bihara. It is clearly a Vihara, or an educational centre with residential facilities.

Kutila Mura: situated on a flattened hillock, about 5 km north of Shalban Vihara inside the Comilla Cantonment is a picturesque Buddhist establishment. Here, three stupas are found side by side representing the Buddhist “Trinity” or three jewels, i.e. the Buddha, Dharma and Sangha.

Charpatra Mura: is an isolated small oblong shrine situated about 2.5 km. north-west of Kotila Mura stupas. The only approach to the shrine is from the East through a gateway which leads to a spacious hall. Here a number of shrines can be found.

Ananda Vihara: Largest among the Mainamati monuments is the Ananda Vihara. Situated in the archaeologically rich Kotbari central area, it represents a huge religious-cum-educational establishment of viharas, stupas and chapels all around. Together with the largest water tank in the area, this Vihara complex was built by Shri Anandadeva, the third ruler of the early Deva dynasty, sometime at the end of the 7th or beginning of the 8th century AD. Military contractors and brick hunters damaged this great establishment with its central shrine beyond recognition in 1944-45. Subsequently, the process of Cantonment building seriously affected the site. Excavations carried out here for a few seasons in the late seventies on a limited scale were incomplete in nature.

Mainamati Ranir Badi: The Mainamati site Museum, situated next to Shavian Vihara, houses a good collection of artifacts found at these sites. The Museum has a rich and varied collection of copper plates, gold, and silver coins, and 86 bronze objects. Over 150 bronze statues have been recovered mostly from the monastic cells, bronze stupas, stone sculptures, and hundreds of terracotta plaques each measuring on an average of 9″ high and 8″ to 12″ wide.

Some 72 years earlier (1803), from the same area, was discovered the first Mainamati relic, the copperplate of Ranavankamalla Harikaladeva, dated 1220 AD, which records a description of the capital city of Pattikera as ‘adorned with forts and monasteries’. The name now survives in the modern Patikara pargana of the locality.

Mainamati excavations have, thus, thrown a flood of light on almost every aspect of the life and culture of the southeastern part of Bengal. It has supplied detailed information regarding the social, political, and economic condition of the region and has led to the discovery of the remarkable early Deva dynasty and of Balabhatta, the founder of Devaparvata. It has settled a number of historical and geographical questions, for instance, concerning the extent and bounds of Samatata, the location of Devaparvata, Pattikera and Lalambi-vana (jungle), and the situation of Harikela.