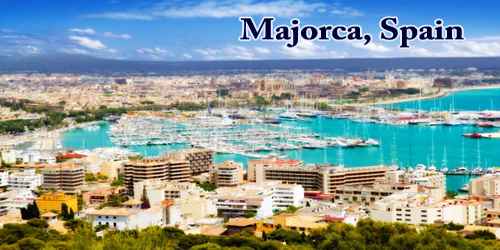 Majorca (English: /məˈjɔːrkə, -ˈdʒɔːr-/ mə-YOR-kə, -⁠JOR-) or Mallorca (Catalan: məˈʎɔɾkə, Spanish: maˈʎoɾka), ancient (Latin) Balearis Major, or Majorica, island, Balearic Islands Provincia (province) and Comunidad autónoma (autonomous community), Spain. The island and its capital, Palma, are bursting with character, while its beaches are popular all over the world, making it one of the most searched for summer destinations. As on the rest of the Balearic Islands, the local language is Catalan, which is co-official to Spanish. 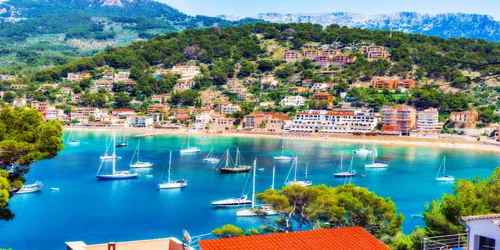 In the western Mediterranean Sea, Mallorca (Majorca) is the largest of the Balearic Islands. Since 1983 the Balearic Islands are an autonomous region of Spain. There are two small islands off the coast of Mallorca: Cabrera (southeast of Palma) and Dragonera (west of Palma). Mallorca comprises two mountainous areas, each about 50 miles (80 km) in length and covering the western and eastern thirds of the island; the areas are divided by lowlands that end in the southern bay of Palma and the northern bays of Alcudia and Pollensa.

Like the other Balearic Islands of Menorca, Ibiza, and Formentera, the island is a holiday destination of great popularity, particularly for tourists from Germany and UK. This little Spanish island includes a lot more to supply the divergent traveler, from rugged landscapes for trekking to curving hilly roads for cycling. The serpentine Tramuntana roads are an honest challenge for daring cyclists. Capdepera, Puig de Santa Maria, and so more puigs with cobbled and gravelly pathways leading up to them present hikers with good workouts.

The Balearic Islands found themselves on the great trade routes that crossed the Mediterranean Sea because of the location of the archipelago. The western mountains are the higher of the two and rise to 4,741 feet (1,445 meters) at Mayor Peak (Puig Major). Precipitous cliffs, often about 1,000 feet (300 meters) high, characterize much of the north coast. Under Quintus Caecilius Metellus Balearicus the island was conquered by the Romans in 123 BC. It flourished under Roman rule, during which time they founded the towns of Pollentia (Alcúdia), and Palmaria (Palma).

In 427, Gunderic and also the Vandals captured the island. Geiseric, son of Gunderic, governed Mallorca and used it as his base to loot and plunder settlements around the Mediterranean until the Roman rule was restored in 465. After some centuries more of ‘ups and downs’ under the successive domination of the Vandals and therefore the Byzantines, the Muslims began 200 years of attacks on the island at the start of the 8th century. In 902 the whole archipelago was annexed to the Emirate of Cordoba.

The diverse vegetation of the island includes pine trees, olive groves, steep gullies, deeply terraced slopes, and rich valleys. The far less rugged southeasterly hills are known for their vast calcareous caves and subterranean lakes. The central lowland, benefiting from the protection offered by the northwest mountains, is a rich agricultural region with typical two-tier cultivation; the upper tier is formed by olives, figs, apricots, oranges, and almond trees, and the lower tier consists of cereals, alfalfa, and legumes.

The capital of Mallorca (Majorca), Palma, was built upon the remains of a Talaiotic settlement as a Roman camp called Palmaria. The island’s fairs and colorful ceremonies (such as those in Pollensa during Holy Week), the mountain scenery, the benign climate, and also the island’s rich historical heritage attract thousands of tourists annually. To the adventurous traveler, water sports offer excitement and adventure; whereas monasteries, castles, and ancient cathedrals are a delight for the history buff. 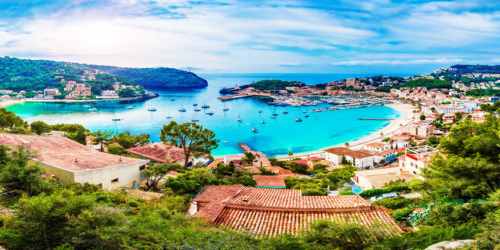 The Cultural Landscape of the Serra de Tramuntana was registered as a UNESCO World Heritage Site in 2011. Majorca is rich in prehistoric remains, notably talayots (rough chambered towers of stone), taulas (temples), and burial caves, among the foremost famous of which are those of San Vicente within the north, whose type and carvings indicate an in-depth relationship to those of southern France, near Arles. At Valldemosa is that the monastery where the French writer-author stayed and therefore the Polish composer Frédéric Chopin wrote a number of his finest mazurkas and preludes.

Majorca had an officially estimated population of 896,038 inhabitants at the start of 2019. The economy of the island is based primarily on agricultural products and tourism, but stone quarries (especially of marble), superphosphate works, and light manufacturing (including pottery, pearls, glassware, shoes, rugs, and souvenirs) provide some jobs. After the Spanish Civil War, the islands saw no violence and the political situation in the islands was the same as that on the peninsula during the Franco dictatorship. It wasn’t until the 1960s and therefore the arrival of tourism that Mallorca began to dismantle her traditional way of life. The island started the process of regaining its sovereignty and cultural heritage in 1975, with Franco’s death.

Majorca is connected to the Spanish mainland and the other Balearic Islands by shipping services. There is regular air service to a number of foreign towns from Palma, the provincial capital. Majorca has been jokingly named because of the 17th Federal State of Germany, because of the high number of German tourists. The precise government institution for the island is that the Insular Council of Mallorca, created in 1978. Many of the standard farming communities surrounding Palma is displaced by hotels, and there has been a good demand for brand spanking new housing, mainly for tourists.

This year, Mallorca jam packs its calendar of activities that cater to a whole host of people with different interests. Many people were attracted to the island by the building industry. Most of Majorca’s population is concentrated in Palma and the Inca, Manacor, and Felanitx industrial towns. Mallorca’s wetlands are famous, with over 400 different species of flora found within the large area of S’Albufera Nature Reserve. These wetlands are prime spots for bird watching; the most local bird species include Black Vulture, Eleonora’s Falcon, Audouin’s Gull, Moustached Warbler, Balearic Shearwater and Balearic (Marmora’s) Warbler.