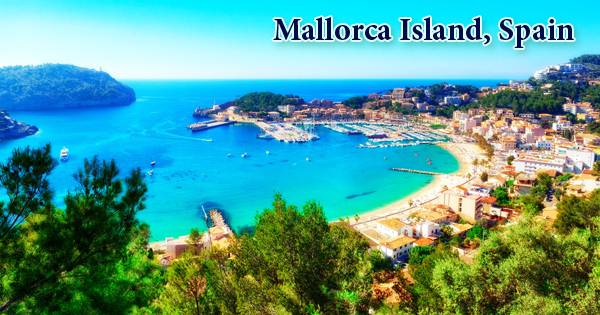 The largest island in the province of the Balearic Islands (province) and comunidad autónoma (autonomous community), Spain, is Mallorca (Catalan: məˈʎɔɾkə, Spanish: maˈʎoɾka) or Majorca (English: /məˈjɔːrkə, -ˈdʒɔːr-/ mə-YOR-kə, -⁠JOR-), an ancient (Latin) Balearis Major, or Majorica, island. It is a Spanish island which belongs to the autonomous archipelago of the Balearic Islands in the western Mediterranean. It comprises two mountainous areas, each roughly 80 kilometers (50 miles) long and covering the western and eastern thirds of the island; the regions are divided by lowlands that end in the south at Palma Bay and in the north at Alcudia and Pollensa Bays. The island and its capital, Palma, are full of character, while its beaches are famous all over the world, making it one of the most popular destinations in the summer. As in the rest of the Balearic Islands, the local language is Catalan, which is a co-official language with Spanish.

Since 1983, the Balearic Islands have been an autonomous zone of Spain. Off the coast of Mallorca, there are two small islands: Cabrera (southeast of Palma) and Dragonera (west of Palma). The island belongs to the European Union and the euro is its official currency. Mallorca, generously furnished with luxurious hotels and villas, is also one of the sailing hotspots in the world. The delights and wines developed locally, delicious traditional cuisine, and first-class restaurants with Michelin stars have only added to its appeal. The island is an extremely popular holiday destination, particularly for tourists from Germany and the United Kingdom, as are the other Balearic Islands of Menorca, Ibiza, and Formentera.

With an area of 3,603 km2, if we exclude the offshore islands of the Cabrera islands and the island of Sa Dragonera, Mallorca is the largest island in the Balearic Islands. The name is derived from “larger island” Classical Latin insula maior. Later, in Medieval Latin, this became Maiorica, “the larger one”, in comparison to Menorca, “the smaller one”. It has about 550 km of coastline and is situated about 170 km from the mainland of Spain. 180 bays are distributed reasonably uniformly along the island’s coast. The Serra de Tramuntana mountain range stretches for about 90 km in the northwest. An incredible 11 peaks of more than 1,000 m, the mountains boat. Puig Major is named the tallest mountain and is 1,445 m high. Administratively, Mallorca also comprises the uninhabited island of Sa Dragonera off the west coast and the Cabrera Islands off the south coast.

Mallorca, an island steeped in history, boasts charming towns, historic sites, a craft and cultural scene and year-round popular events. In North Africa, which had become the main Phoenician city, the island eventually came under the rule of Carthage. Carthage lost all of its overseas possessions after the Second Punic War, and the Romans took over. The Romans invaded the island in 123 BC, and Mallorca’s life and prosperity were intricately connected with Rome for almost 600 years. Two major centers, Pollentia (now Alcodia) and Palma, have emerged. The Vandal Kingdom of Africa, which destroyed much of the Roman infrastructure, conquered Mallorca (and the other Balearic Islands) in the 5th century AD. The islands became part of the Byzantine Empire in 534 AD.

In 534, the Eastern Roman Empire, headed by Apollinarius, recaptured Mallorca. Christianity thrived under Roman rule and numerous churches were constructed. From 707 onwards, Muslim raiders from North Africa gradually invaded the island. Recurring invasions prompted the islanders to ask for aid from Charlemagne. Mallorca was targeted by the Republicans for being a nationalist stronghold during the Spanish Civil War. In August 1936, what became known as the Battle of Mallorca saw the nationalists finally succeed in defending the island. Mallorca has been one of Europe’s first and most popular destinations for tourists since the 1950s. The capital of Mallorca, Palma, was built on the remains of the Talaiotic settlement as a Roman camp named Palmaria. Palma became the capital of the autonomous Balearic Islands territory in 1983. In the heart of the city, overlooking the ocean, Palma has a popular tourist attraction, the Cathedral-Basílica de Santa María de Mallorca.

With moderate to warm summers and mild winters, the climate in Mallorca is subtropical. The sun shines for 7.9 hours a day on average. Daytime temperatures on the coast consistently climb above the 30-degree mark in the summer months of July and August. There are no unrealistic inland temperatures of up to 40°C. The limestones that predominate in Mallorca are readily soluble in water and have given rise to extensive karst regions. Dolomitic rocks are primarily found in the mountainous regions of Mallorca, the Serra de Tramuntana and the Serres de Llevant, in addition to limestone. In summer, the Mediterranean’s water temperature reaches up to 25°C. The water temperature does not fall below 14°C in winter.

Catalan (spoken as the local dialect of Mallorca) is the official language, while Spanish is also spoken by all people, of course. English and German are widely spoken in all tourist destinations, and at least the majority of tourist-oriented literature can be found in these four languages. Mallorca is Spain’s largest and second most populated island by area (after Tenerife in the Canary Islands). At 1.445 m (4,741 ft) in the Serra de Tramuntana, the highest peak on Mallorca is Puig Major. The neighboring peak at Puig de Massanella is the highest accessible peak at 1,364 m, as this is a military region (4,475 ft). Two bays make up the northeast coast: the Badia de Pollença and the larger Badia d’Alcúdia.

Overall, the island is divided into 53 municipalities; foreign nationals are around 21 percent of the permanent population, with Germans making up the largest immigrant group with a 3.5 percent share. The island has two of the caves, the above sea level Coves dels Hams and the Coves del Drach, both above and below the sea, also have underground lakes and are available for tours. Both are located near Porto Cristo, the eastern coastal city. Tourism makes up 75 percent of the overall economic production of the island. Although about 360,000 tourists visited the island in 1960 by 2016, this had risen to around 14 million, while Mallorca’s number of registered hotel beds is about 290,000. Much of the visitors are from Germany or the UK (23 percent and 22 percent respectively).

The interior of the island is covered with lush pine forest, olive and almond trees, and the agricultural land and vineyards of the central plain. Mallorca has been a major tourist destination since the 1950s, and the tourism industry has been the island’s key revenue stream. Mallorca’s economy is largely dependent on its tourism industry, with thousands of rooms available. Mallorca, because of the large number of German visitors, has been jokingly referred to as the 17th Federal State of Germany. The island hosts all kinds of activities, including spring and autumn agricultural fairs, summer live music and DJs, religious fiestas, and international sporting events.