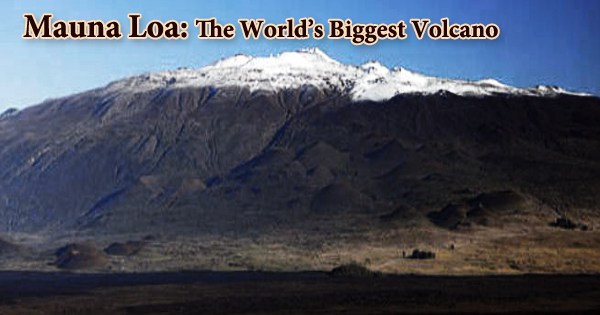 Mauna Loa (/ˌmɔːnə ˈloʊ.ə/ or /ˌmaʊnə ˈloʊ.ə/; Hawaiian: ˈmɐwnə ˈlowə; English: Long Mountain) is the world’s largest active volcano. It is the classic shield volcano, with broad, rounded sides and a Hawaiian name that means “long mountain.” It is one of five volcanoes that make up the Hawaiian Island, which is located in the Pacific Ocean and belongs to the United States of America. Its lengthy submarine flanks plunge another 5 km (16,400 ft) to the sea bottom, which is further depressed another 8 km by Mauna Loa’s massive mass (26,200 ft).

Mauna Loa (meaning “Long Mountain” in Hawaiian) is one of the world’s largest single mountain masses, rising to 13,677 feet (4,169 meters) above sea level and covering half of the island’s area. Its dome measures 75 miles (120 kilometers) in length and 64 miles (103 kilometers) in width. It is an active shield volcano with relatively moderate slopes, with a volume of around 18,000 cubic miles (75,000 km3), despite the fact that its peak is about 125 feet (38 m) lower than Mauna Kea’s. Mauna Loa lava outbursts are silica-poor, extremely fluid, and generally non-explosive.

However, it is more remarkable because it rises 30,000 feet (9,144 m) from the seabed, which is higher than Mount Everest. Under the weight of this massive mountain, the ocean floor literally bends. Mauna Loa’s land mass is nearly equivalent to the total land mass of all of the other Hawaiian Islands. Mauna Loa has been erupting for at least 700,000 years, and it may have first risen above sea level around 400,000 years ago. The oldest rocks that have been dated are less than 200,000 years old.

While an eruption of the volcano that dominates the landscape isn’t imminent, scientists watching the unrest on Hawaii’s largest island believe Mauna Loa’s lengthy slumber may be coming to an end. It is one of the world’s most active volcanoes, while not erupting as frequently as its younger cousin Kilauea. When it erupts, it usually does so in a big way, resulting in massive torrents of lava that have frequently threatened Hilo.

The magma for the volcano comes from the Hawaii hotspot, which over tens of millions of years has been responsible for the formation of the Hawaiian island chain. Within 500,000 to one million years, Mauna Loa will be carried away from the hotspot by the sluggish movement of the Pacific Plate, and it will become extinct. Moku‘weoweo, the peak caldera, is roughly 6 square miles (15 square kilometers) in size and 600 feet deep (180 metres). Mauna Loa eruptions have historically been characterized by large volume flows that create lava that can travel vast distances, contributing to the island’s form.

The most recent eruption of Mauna Loa occurred between March 24 and April 15, 1984. There have been no recent lethal eruptions of the volcano, but eruptions in 1926 and 1950 destroyed towns, and Hilo is largely built on lava flows from the late 1800s. Because this volcano reaches nearly 9 kilometers above sea level and the immense mountain’s weight has depressed the marine crust by around 8 kilometers, the total pile of volcanic material created by Mauna Loa is likely to be around 17 kilometers. It covers a surface area of 5,271 km2 (2,035 sq mi) and spans a maximum width of 120 km (75 mi), making it the world’s largest subaerial and second largest total volcano (after Tamu Massif).

Since its first well-documented historical eruption in 1843, Mauna Loa has erupted 33 times, making it one of the world’s most active volcanoes. Since 1868, it has produced enormous, voluminous basalt flows that have reached the ocean eight times. It covers more than half of the surface area of the island of Hawai’i, containing roughly 65,000 to 80,000 km3 (15,600 to 19,200 cu mi) of solid rock. Mauna Loa has two rift zones to the northeast and southwest, as well as a primary summit caldera called Moku‘āweoweo. The two rift zones have historically been quite active, with flows flowing toward Hilo in 1984 and South Kona in 1950.

When the volcano’s broad undersea flanks (5,000 m (16,400 ft) and 4,170 m (13,680 ft) subaerial height are added together, Mauna Loa climbs 9,170 m (30,085 ft) from base to summit, surpassing Mount Everest’s 8,848 m or 29,029 ft elevation from sea level to summit. Half of the eruptions reported from Mauna Loa have remained restricted to the remote summit area, indicating that an eruption does not always entail a hazard to people or property. Several eruptions, however, have resulted in lava streaming all the way to the ocean in a couple of hours. It’s just impossible to know what will happen ahead of time.

Since 1843, Mauna Loa has erupted 33 times, once every five years on average. Over a longer length of time, it is thought to have erupted once every six years for the past 3,000 years. Mauna Loa is shaped like a shield volcano, with a long, broad dome stretching down to the ocean floor and steep slopes of roughly 12 degrees at its steepest points due to its incredibly flowing lava. It erupts from both its top, which is occupied by a huge caldera, and its flanks’ NE and SW rift zones.

Almost 90% of Mauna Loa’s surface is covered by lava flows younger than 4000 years, approximately 50% by lava flows no older than 1500 years, and about 25% by lava flows less than 750 years. Since then, Mauna Loa has not erupted, and as of 2020, it has been silent for nearly 35 years, the longest stretch of silence in recorded history. Between 1950 and 1984, Mauna Loa was dormant for 34 years, with the exception of modest activity in 1975. Its recent inactivity is unlikely to be long-term, as even a century of low activity in Mauna Loa’s several hundred-thousand-year lifetime is a fairly short timeframe.