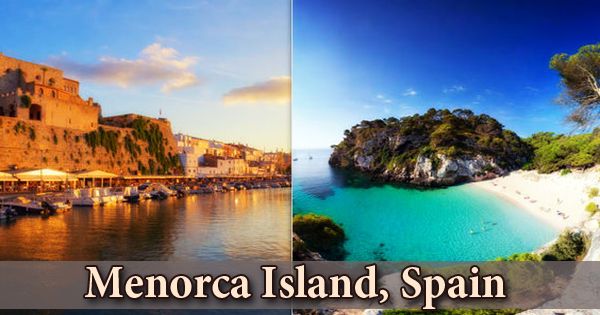 Menorca (Catalan: məˈnɔɾkə, Spanish: meˈnoɾka) or Minorca (English: /mɪˈnɔːrkə/ min-OR-kə; from Latin: Insula Minor, lit. ‘smaller island’, later Minorica), an island of the Balearic Islands provincia (province) and comunidad autónoma (autonomous community), Spain. Situated in the western Mediterranean Sea, it is the second largest of the Balearic Islands. Its name is derived from its scale, which compares it to nearby Mallorca. Mahón (Catalan: Maó (məo), Spanish: Mahón (ma’on)) is the largest city and capital of the island, while Menorca is not a province and forms a political union with the other islands of the archipelago. Menorca has a population of about 93,397 people (at 1st January 2019). It is located between 39°47 ‘and 40°00’ N, 3°52 ‘and 4°24’ E. Much of the 258 square miles (668 square km) of the island area is dry, monotonous tableland with rough hills rising to Toro hill (1,175 feet (358 meters)) in the north middle.

There are 80 beaches and bays in Menorca and most of them are still untouched, surrounded by pines or the traditional ‘macchia’ trees of the Mediterranean. It is the smallest and least common of the Balearics, but the island’s natural beauty has been preserved by the absence of mass tourism. The island is known for its array of monuments of megalithic stone: navetes, taules, and talaiots, which suggest human activity in very early prehistoric times. Other Mediterranean cultures, including the Greek Minoans of ancient Crete, inspired some of Menorca’s earliest history. Unesco declared Menorca a Biosphere Reserve in 1993, aimed at protecting environmental areas such as the wetlands of the Parc Natural S’Albufera des Grau and its liberal sprinkling of enigmatic Bronze Age sites.

The island is a biosphere that preserves the environment and offers beautiful landscapes. There is an impressive selection of wild flowers and birds to see. Natural ports, such as those of Mahón or built by the hand of man, are capable of preserving the essence of Menorca in the past, being the key features of extreme beauty panoramas. This port, which has witnessed the civilizations and people that have put their attention on Menorca, forms five kilometers in length. Romans, Byzantines, Vandals, Muslims and Britons who left some of their mark on the streets of Mahón on their passage through the port.

Pirates took advantage of the Balearic Islands’ strategic position to raid Roman trade, using both Menorca and Mallorca as bases. The Romans invaded Menorca in response to this. Both islands were fully under Roman rule by 123 BC, and were later incorporated into the province of Hispania Citerior. The flagship of the Port of Mahón, the largest natural port in the Mediterranean and the second largest in Europe, reflects tranquillity and a faint sea breeze.

The island became part of the Caliphate of Cordoba in 903 and the island prospered during this time of Muslim dominance, as trade flourished and people of various religious beliefs co-existed peacefully. Agricultural production increased and extensive systems of irrigation were developed. But Menorca went into decline until the end of the Middle Ages after the conquest by a Catalan army in 1287, when both the landowning elite and a strong church oppressed the peasant classes. Turkish naval attacks devastated Mahon during the 16th century, and then the capital, Ciutadella. In Mahon, North Africa’s Barbary pirates took substantial booty and as many as 6,000 slaves. Various Spanish kings, including Philip III and Philip IV, styled themselves “King of Minorca” as a subsidiary title.

Mahón, the capital, has many buildings from the British occupation period (1713-83) and is best explored on foot. The Town Hall (Casa Consistorial), Santa Maria Church and San Francisco Church are among the attractions. The first period of British rule, from 1708 to 1756, is considered one of the most fruitful of modern history in Menorca, since the Inquisition was abolished by Kane, dramatically reducing the power of the church, building schools, reservoirs and hospitals, and laying out the central road between Maó and Ciutadella, known until today as Kane’s Road.

In 1756, after the Siege of Fort St Philip and a failed British relief attempt during the Seven Years’ War, France seized the island. After Britain’s victory in the Seven Years’ War, the 1763 Treaty of Paris allowed the British to return to the island. Menorca was returned to Spain in 1802 and as the industrial revolution changed Europe in the 19th century, the island became more prosperous, gaining international fame for high-quality shoe manufacturing, textile spinning, and silver purse manufacturing, a precursor of the costume jewellery for which the island is now famous. Dairy production increased, mainly thanks to the Friesland cow introduced by the British, and international acclaim was given to the island’s cheeses and butter.

There are also two incomparable things in Menorca that are suitable for those who want to spend their holidays enjoying the beauties of the wilderness of the island: the Camì de Cavalls and the Albufera des Grau Natural Park. Albufera des Grau is a reserve of the biosphere and home to several species of fauna that are protected. Minorca was recognized as a Biosphere Reserve by UNESCO in October 1993. The island’s bid to become the 25th member of the International Island Games Association was accepted in July 2005. In a stunning Mediterranean bay, full of white houses, the port of Fornells, one of the most authentic in Menorca and a favorite for all those escaping the hustle and bustle of the major urban centers, is situated.

With rainfall peaking in late autumn, Menorca is usually wetter than Mallorca. The average annual highs in winter range from 14 °C (57 °F) to 29 °C (84 °F) in summer. Temperatures are usually very stable due to its offshore location and the small size of the island. With 216 kilometers of coastline, the island has a total area of 702 square kilometers and the longest distance is 47 kilometers between the two main towns of Maó and Ciutadella. Around 46 sandy beaches, plus a few rocky and pebbly beaches, many of which are lovely remote, deserted coves, are blessed in Menorca. There is no question that Menorca is one of the favorite beach holiday destinations in Europe, thanks to the fine sand on many of the beaches, combined with beautiful scenery and excellent facilities. Many beaches have restaurants and bars of good quality that offer a wide variety of local and foreign refreshments.

The rocks here are the oldest on the island and Monte Toro, which is the highest point on the island at 358 meters, is part of the gentle rolling hills. Vegetation on the northern coast is sparse and few trees soften the high rocky horizons, exposed to the powerful northern tramuntana wind. The Mediterranean diet, which is considered to be very good, dominates the cuisine of Minorca. Although many locals have embraced new attitudes, some old customs are still preserved. In particular, Minorca is well-known for its traditional summer festivals, which intrigue many tourists.

In Menorca, cycling is also a popular sport; specialist cycling companies and a fabulous range of easy-to-follow routes of varying difficulty are available. Menorca doesn’t have any major native mammals. Some small mammals are present, including rabbits, bats, rats, mice, pine martens, and a North African hedgehog subspecies. The barrancs, sinuous deep ravines and canyons that stretch from the central part of the island to the south coast, are one of the most significant and important features of the Menorcan landscape. The dry river beds are now an ideal habitat for many kinds of plants, from wild orchids to olive trees and figs, cut deep into the limestone rock by rainfall over the millenniums.

With its many rural locations, a ramble in the countryside of Menorca is a year-round treat, the perfect basis for intimately exploring the beautiful countryside at a leisurely pace. Again, in most cases, secure marked routes are to be found. Menorca’s birdlife is very well known. Menorca is a well-watched island on the migration route of many animals, and in spring it is possible to see a large number of moving migrants. Caldereta de llagosta, a beautiful lobster stew originally prepared by fishermen on their vessels, is the signature dish of the island.