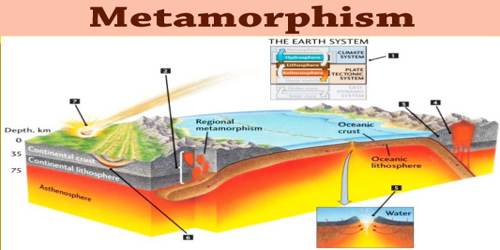 Metamorphism is the process by which rocks are changed in composition, texture, or structure by extreme heat and pressure. The change occurs primarily due to heat, pressure, and the introduction of chemically active fluids. The chemical components and crystal structures of the minerals making up the rock may change even though the rock remains a solid. Metamorphism typically occurs between diagenesis (max. 200°C), and melting (~850°C). Metamorphic rocks can change without melting. Heat causes atomic bonds to break, and the atoms move and form new bonds with other atoms, creating new minerals with different chemical components or crystalline structures (neocrystallization), or enabling recrystallization. When pressure is applied, somewhat flattened grains that orient in the same direction have a more stable configuration. Occurrences and Types of Metamorphism

The word “Metamorphism” comes from the Greek: Meta = after, morph = form, so metamorphism means the after form.  In geology this refers to the changes in mineral assemblage and texture that result from subjecting a rock to conditions such pressures, temperatures, and chemical environments different from those under which the rock originally formed. Metamorphism therefore occurs at temperatures and pressures higher than 200oC and 300 MPa.  Rocks can be subjected to these higher temperatures and pressures as they are buried deeper in the Earth.  Such burial usually takes place as a result of tectonic processes such as continental collisions or subduction.

The upper limit of metamorphism occurs at the pressure and temperature where melting of the rock in question begins.  Once melting begins the process changes to an igneous process rather than a metamorphic process. Contact Metamorphism – Contact metamorphism occurs adjacent to igneous intrusions and results from high temperatures associated with the igneous intrusion. Because the volume affected is small, the pressure is near constant. Resulting rocks have equidimensional grains because of a lack of stress and are usually fine-grained due to the short duration of metamorphism. The rock produced is often a fine-grained rock that shows no foliation, called a hornfels.

Cataclastic Metamorphism – Cataclastic metamorphism occurs as a result of mechanical deformation, like when two bodies of rock slide past one another along a fault zone. It is not very common and is restricted to a narrow zone along which the shearing occurred.

Shock Metamorphism – This kind of metamorphism occurs when either an extraterrestrial object (a meteorite for instance) collides with the Earth’s surface or during an extremely violent volcanic eruption. Impact metamorphism is, therefore, characterized by ultrahigh pressure conditions and low temperature. The resulting minerals and textures are characteristic of these conditions.

Burial Metamorphism – When sedimentary rocks are buried to depths of several hundred meters, temperatures greater than 300oC may develop in the absence of differential stress. Burial metamorphism overlaps, to some extent, with diagenesis, and grades into regional metamorphism as temperature and pressure increase.