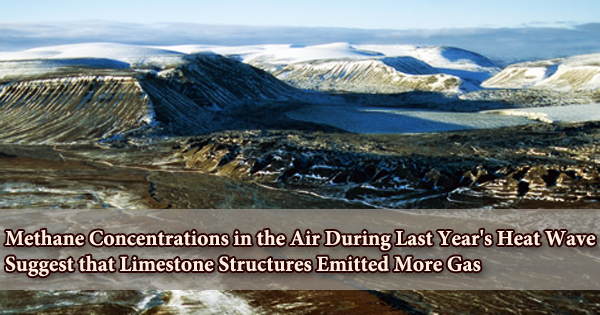 Geologists examined the geographical and temporal distribution of methane concentrations in the air of northern Siberia with geological maps in a study headed by the University of Bonn (Germany). As a result of the increased methane releases from limestone formations during last year’s heatwave, methane concentrations in the air have increased. The findings were reported in the journal Proceedings of the National Academy of Sciences (PNAS).

What impact did the summer 2020 heatwave have in Siberia? Geologists examined the geographical and temporal distribution of methane concentrations in the air of northern Siberia with geological maps in a study headed by the University of Bonn (Germany). As a result of the increased methane releases from limestone formations during last year’s heatwave, methane concentrations in the air have increased.

Carbon dioxide is released into the atmosphere as a result of the combustion of fossil fuels (coal, natural gas, and oil), solid waste, trees, and other biological materials, as well as chemical processes (e.g., manufacture of cement). When carbon dioxide is absorbed by plants as part of the biological carbon cycle, it is removed from the atmosphere (or “sequestered”).

Permafrost soils, which are permanently frozen, cover most of the northern hemisphere, particularly in northern Asia and North America. If they thaw in a warmer planet, the emission of CO2 and methane, which exacerbate the anthropogenic greenhouse gas impact, might be dangerous.

“Methane is particularly dangerous here because its warming potential is many times higher than that of CO2,” explains Prof. Dr. Nikolaus Froitzheim from the Institute of Geosciences at the University of Bonn. Pessimists therefore already spoke of an imminent “methane bomb.”

Coal, natural gas, and oil production, and transportation all produce methane. Livestock and other agricultural operations, land usage, and the decomposition of organic material in municipal solid waste dump all contribute to methane emissions.

However, most earlier predictions indicated that permafrost thawing will contribute “just” around 0.2 degrees Celsius to global warming by 2100. New research by Nikolaus Froitzheim and his colleagues Jaroslaw Majka (Krakow/Uppsala) and Dmitry Zastrozhnov (St. Petersburg) has called this assumption into question.

The majority of prior research focused solely on emissions from the decomposition of plant and animal remnants in permafrost soils. Researchers headed by Nikolaus Froitzheim compared methane quantities in Siberian air measured by satellite-based spectroscopy to geological maps in their present work. The Taymyr Fold Belt and the margin of the Siberian Platform, both in northern Siberia, have much higher quantities.

The bedrock in these two extended regions is created by Paleozoic age limestone formations, which is rather impressive (the period from about 541 million years ago to about 251.9 million years ago).

The high amounts in both regions occurred during the severe warmth of summer 2020 and lasted for months afterward. But how did the extra methane get there in the first place? “The studied regions had very thin to nonexistent soil formations, making methane release from the decomposition of organic soil materials improbable,” explains Niko Froitzheim. As a result, he and his colleagues believe that warming made fractures and cave systems in limestone that had been blocked by a combination of ice and gas hydrate permeable. “As a result, natural gas, mostly methane, can reach the Earth’s surface from reserves within and below the permafrost,” he explains.

The experts will now conduct measurements and make calculations to determine how much and how quickly natural gas will be discharged. “Natural gas reserves in North Siberia’s subsoil are expected to be enormous. When parts of this are released into the atmosphere as a result of permafrost thawing, it may have drastic consequences for the already overheated global climate,” Niko Froitzheim stresses.

As carbon dioxide is generated and absorbed by numerous microbes, plants, and animals, it is continually transferred among the atmosphere, ocean, and land surface. However, in the absence of anthropogenic effects, CO2 emissions and removal by these natural processes tend to balance. Human activities have contributed significantly to climate change by adding CO2 and other heat-trapping gases to the atmosphere since the Industrial Revolution began about 1750.

The research included the universities of Bonn, Uppsala, and AGH Krakow, as well as the Karpinsky Russian Geological Research Institute in St. Petersburg.