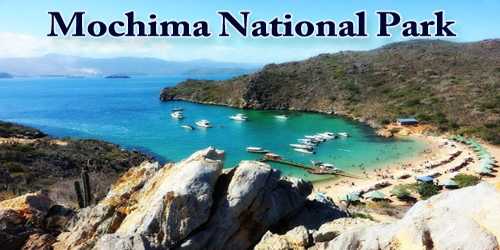 Mochima National Park (/moʊˈtʃiːmə/ moh-CHEE-mə) is located in the States of Anzoátegui and Sucre (state), on the northeastern coast of Venezuela. The park covers 94,935 hectares and is made up of an exclusively marine area in its western sector (Anzoátegui State), a coastal marine area that includes the Gulf of Santa Fé and Mochima Bay, and a mountainous area that covers the Turimiquire Dam watershed (Sucre State). Mochima Park was created to protect the montane forests of the Turimiquire Range and the country’s eastern Caribbean Sea marine landscapes.

This park covers a portion of the coast and a chain of offshore islands east of Puerto La Cruz to Cumaná. The main attractions here are the beaches and the diving. The islands can be accessed by boat from Puerto La Cruz, Santa Fé, and Mochima. It is also possible to explore the mainland portion of the park by car or bus, stopping off at small villages and beach-lined bays off highway 9, but this is primarily a place for boating. The area around the park is very quiet and it doesn’t see nearly the amount of traffic as Morrocoy.

Other threats stem from the fact that when the park was created, many human settlements were included inside park boundaries and The National Park Institute (INPARQUES) has been unable to manage the situation properly. Even though educational policies have improved community relations, INPARQUES is highly deficient in terms of park management and administration.

Mochima National Park was established in 1973 and is the second marine park in the country. Its boundaries encompass 32 offshore islands, and the whole shoreline from Cumana to Puerto La Cruz. Named after the town of Mochima, it is one of a number of national parks along Venezuela’s northeast Caribbean coastline.

The park is sizable 949 km2. Year-round temperatures range between 22 and 28 °C. Coastal climate has high temperatures and constant trade winds from November until May, while it is a bit cooler with more humidity from June to October. The park was created to protect the Turimiquire Range’s montane forests and the landscapes of the Caribbean Sea along Venezuela’s east coast, but today is one of the country’s most threatened parks due to construction projects.

Some facts of Mochima National Park:

Marine waters in the park are rich in cetacean diversities including such as humpback whales, bryde’s whales, sperm whales, pilot whales, and several species of dolphins. This coast is a mountainous zone with beaches, gulfs, and inlets of extraordinary beauty. Because of various micro-climates, some areas have gigantic cliffs nearly devoid of vegetation dropping into the water while others are lush with jungle vegetation and sandy beaches. Many small towns have sprung up along the 50 km between the cities on either side (Puerto La Cruz and Cumaná).