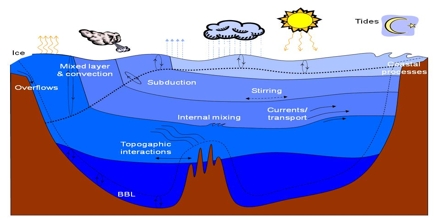 Modular Ocean Model has traditionally been a level-coordinate ocean model, in that the ocean is partioned into boxes whose bottoms can be found at fixed depths. Such a representation make easy to solve this momentum equations and the well-mixed, weakly stratified layer often known as the ocean mixed layer near the ocean surface. The Modular Ocean Model is a three-dimensional ocean circulation model designed primarily for studying the ocean climate system.