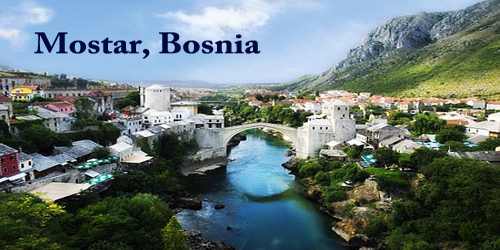 The historic town of Mostar, spanning a deep valley of the Neretva River, developed in the 15th and 16th centuries as an Ottoman frontier town and during the Austro-Hungarian period in the 19th and 20th centuries. Mostar has long been known for its old Turkish houses and Old Bridge, Stari Most, after which it is named.

In the 1990s conflict, however, most of the historic town and the Old Bridge (90 feet (27 meters)), designed by the renowned architect Sinan, was destroyed. The Old Bridge was recently rebuilt and many of the edifices in the Old Town have been restored or rebuilt with the contribution of an international scientific committee established by UNESCO. The Old Bridge area, with its pre-Ottoman, eastern Ottoman, Mediterranean, and western European architectural features, is an outstanding example of a multicultural urban settlement. The reconstructed Old Bridge and Old City of Mostar is a symbol of reconciliation, international co-operation, and of the coexistence of diverse cultural, ethnic, and religious communities.

The town served as a center for crafts and trade, and its reconstructed coppersmith’s bazaar is a tourist attraction. While under Austrian rule (1878–1918), Mostar became a center for Serbian scholars and poets and for a strong nationalistic movement. 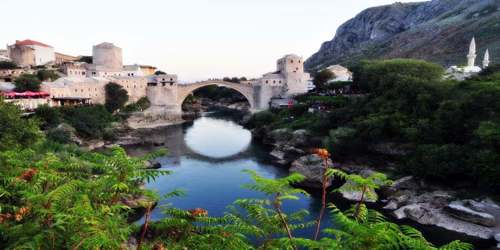 Actually, Mostar means ‘bridge-keeper’, a name that first entered the history books in 1474. A settlement established as an urban structure in the 15th century on the crossing of a river and a land road was originally located in a valley of the Neretva River, between Hum Hill and the foot of the Velež Mountain. This relatively small settlement had two towers around the bridge, which dated 1459, as noted by written historical sources. The current name, Mostar, was mentioned for the first time in 1474 and derived from “mostari” the bridge keepers. The historic town of Mostar developed in the 15th and 16th centuries as an Ottoman frontier town and during the short Austro-Hungarian period in the 19th and 20th centuries. Mostar has been long known for its old Turkish houses and the Old Bridge Stari most, an extraordinary technological achievement of bridge construction.

The town was fortified between the years 1520 and 1566, and the wooden bridge rebuilt in stone. The stone bridge, the Old Bridge (Stari Most), was erected in 1566 on the orders of Sultan Suleiman the Magnificent and at 28 meters (92 feet) long and 20 meters (66 feet) high, quickly became a wonder in its own time. Later becoming the city’s symbol, the Old Bridge was designed by Mimar Hayruddin, a student and apprentice of Ottoman architect Mimar Sinan. In the late 16th century, Köprühisar was one of the towns of the Sanjak of Herzegovina. The traveler Evliya Çelebi wrote in the 17th century that: the bridge is like a rainbow arch soaring up to the skies, extending from one cliff to the other… I, a poor and miserable slave of Allah, have passed through 16 countries, but I have never seen such a high bridge. It is thrown from rock to rock as high as the sky.

After World War II, Mostar developed industries producing plastics, tobacco, bauxite, wine, aircraft, and aluminum. Several dams (Grabovica, Salakovac, Mostar) were built in the region to harness the hydroelectric power of the Neretva. The city was a major industrial and tourist center and prospered economically during the time of the Socialist Federal Republic of Yugoslavia.

Under Austro-Hungarian rule in the 19th century, the city’s center of gravity shifted north to Trg Musala where neo-Moorish buildings such as the City Baths and Hotel Neretva projected a grand new city image.

Počitelj, just south of Mostar, is famous for its Muslim architecture with a mosque, madrasah (school), and Turkish houses. An aluminum works, completed in 1976, processes locally mined bauxite, utilizing power from a nearby hydroelectric plant. Mostar University was founded in 1977.

Before the 1990s conflict, Mostar was one of the most ethnically mixed cities in Yugoslavia, with one of the country’s largest proportions of mixed marriages. Bosniak Muslims and Croats each comprised about 35% of the population, with Serbs at around 19%.

When Serb and Montenegrin-controlled units of the Yugoslav army started bombarding Mostar in April 1992, the city’s Bosniaks and Croats initially banded together. However, on 9 May 1993, a bitter conflict erupted between the former allies. A de facto front line emerged north-south along the Bulevar, with Croats to the west and Bosniaks to the east. For two years both sides swapped artillery fire and by 1995 Mostar resembled Dresden after WWII; all its bridges including Stari Most were destroyed, along with numerous historical buildings including all but one of its 27 Ottoman-era mosques. Around 2000 people lost their lives.

Mostar, and Herzegovina area in general, enjoy a modified Humid subtropical climate (Cfa) under the Köppen Climate Classification, with cold, humid winters and hot, drier summers. In the summer months, occasional temperatures above 40 °C (104 °F) are not uncommon, with a record temperature of 46.2 °C (115.2 °F). The coldest month is January, averaging about 5 °C (41 °F), and the warmest month is July, averaging about 26 °C (78 °F). The sunniest months are between June and September. The remainder of the year is wet and mild. Mostar is the sunniest city in the country with an average of 2291 solar hours a year. Snow is relatively rare and it usually melts within a few hours or days.

The Old Bridge was rebuilt in 2004 and many of the edifices in the Old Town were restored or rebuilt with the contribution of the international scientific committee established by UNESCO.

The Old Bridge Area, with its pre-Ottoman, Eastern Ottoman, Mediterranean, and Western European architectural features, is an outstanding example of a multicultural urban settlement. The reconstructed Old Bridge and the Old City of Mostar are symbols of reconciliation, international cooperation, and the coexistence of diverse cultural, ethnic, and religious communities.

Once visitors have taken all their pictures at Old Bridge, from street art to the Bruce Lee statue, they will find tons of beautiful and quirky things to do that’ll make them fall more in love with Mostar. Still housing some reminders of the Bosnian War, there are plenty of places that will impact visitors greatly with their stories. The Sniper Tower is one of those places. Used for snipers to easily spot their targets below, it is now decorated with street art and open for visitors to discover. 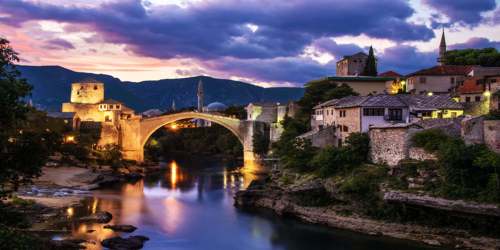 Visitors can easily walk around and explore for hours enjoying historic Austro-Hungarian architecture, sitting by the river, swimming or even training for a jump from the bridge.

When the sun sets the crowds of tourists will disperse and the city will light up. When it’s time for dinner, take a pick of countless restaurants with beautiful river views, traditional live music, and local cuisine.