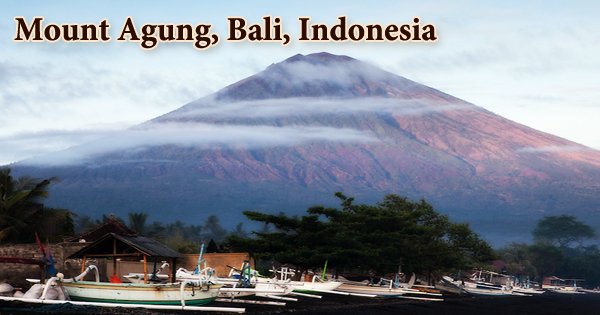 Mount Agung (Indonesian: Gunung Agung; “Great Mountain”), also known as Dutch Piek Van Bali (“Peak of Bali”), is an active volcano on the Indonesian island of Bali. It is Bali’s tallest point, dominating the surrounding area and impacting the environment, particularly rainfall patterns. At an elevation of 9944 feet, it is the highest point on the island of Bali (3031 meters). After being inactive for 120 years, it erupted in 1963, killing 1,600 people and displacing 86,000 people. The mountain looks to be perfectly conical from afar. Although both mountains are regularly covered in clouds, it is possible to see Mount Rinjani on the neighboring island of Lombok to the east from the mountain’s peak.

According to one Balinese legend, the gods created mountains for their thrones, the highest of which is Mount Agung, which is located in Bali. Mount Agung is a stratovolcano that has been shaped by a long series of eruptions. Eruptions of andesite lava, volcanic breccia, volcanic ash, and pyroclastic debris have built up the stratovolcano. Mount Agung is Bali’s highest mountain, and its distinctive natural landscape influences the weather and climate in the surrounding region.

Mount Agung absorbs the water from the clouds that flow in from the west, making the western parts of Bali green and lush and the eastern parts barren and arid. Mount Agung eruptions can be fatal, posing a variety of volcanic threats to the over a million people who live within a 20-mile (30-kilometer) radius. Mount Agung’s eruption in 1963-1964 was one of the greatest volcanic eruptions of the twentieth century, with a Volcanic Explosivity Index (VEI) of 5.

The 1963 eruption was one of the most powerful and destructive in Indonesia’s history. Despite the presence of the big crater, the mountain appears to be perfectly conical from distance. Although both mountains are regularly covered in cloud, it is possible to see Mount Rinjani on the island of Lombok from the mountain’s peak. On February 18, 1963, inhabitants in the area heard tremendous explosions and saw clouds rising from Mount Agung’s crater.

On February 24, lava began streaming down the mountain’s northern slope, covering 7 kilometers in 20 days. The volcano erupted (VEI 5) on March 17, blasting debris 8 to 10 kilometers into the air and causing major pyroclastic flows. The flows were 30-40 m thick and 0.5-0.8 km broad. The overall volume of these floods is estimated to be around 50 million cubic meters. These floods wreaked havoc on a number of villages, killing between 1,100 and 1,500 people. Another 200 people were killed by cold lahars caused by heavy rain after the eruption.

The crater wall’s south tip crumbled in May, diminishing its height by around 200 meters. The upper end of the Langon river is currently the lowest crater wall (2600 m). The Mother Temple of Besakih was only a few yards away from being destroyed by lava flows. Balinese believe the temple’s preservation as miraculous and a statement from the gods that they wanted to show their power while not destroying the monument that the Balinese had built. Mount Agung created massive ash clouds that soared to levels of roughly 12,000 feet (4000 meters) in 2017-2018.

These events resulted in an aviation emergency, forcing the closure of the Ngurah Rai International Airport, causing thousands of tourists and other travelers to cancel their plans. The eruption lasted 3 minutes and 47 seconds, but it wreaked damage on the island as a whole. The 2017 eruption drove nearly 40,000 residents to flee their homes, leaving thousands of visitors trapped in Bali due to the smoke and ash in the air, which forced airports to close. The eruption was reportedly triggered by a series of earthquakes in the area, as well as an increase in seismic activity.

The eruption had dwindled to minimal steam and smoke emissions by the beginning of December. On the 12th of December, a photograph of the crater was taken, revealing a steadily increasing lava dome that now covers about a third of the crater. Interactions between the Australia and Sunda tectonic plates generated the volcanoes of Java, Bali, and many other Indonesian islands. Agung erupted in June 2018, causing 2 km high plumes to disrupt air traffic. A Strombolian explosion happened on July 3rd, throwing debris in all directions.

Visitors could trek up Mount Agung before the 2017 eruption, but today there are 10km exclusion zones surrounding the volcano’s edge as a safety precaution. An eruption in late May 2019 spilled lava and rocks over a distance of around 3 kilometers, with some ash falling on adjacent settlements and international flights being temporarily disrupted. Mount Agung may be seen from afar from a variety of locations on the island of Bali, the most renowned of which being the Pura Lempuyang Luhur Temple, sometimes known as the ‘gateway to heaven’ by tourists, where the peak is perfectly framed between two framed gates.