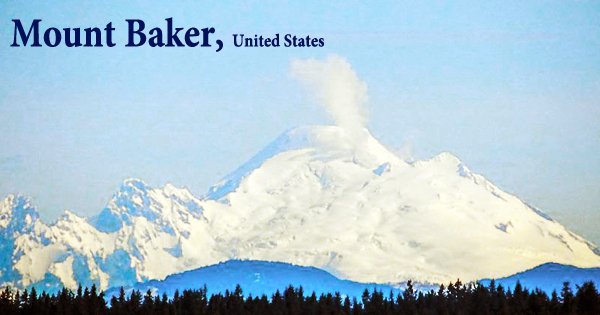 Mount Baker (Lummi: Qwú’mə Kwəlshéːn; Nooksack: Kw’eq Smaenit or Kwelshán), also known as Koma Kulshan or simply Kulshan, is the highest peak in the North Cascades (3,286 m or 10,781 ft) and the northernmost volcano in the conterminous United States. It is situated in northern Washington. In the Cascade Volcanic Arc, it is a 10,781 ft (3,286 m) active glacier-covered andesitic stratovolcano. Glaciers cover the majority of the volcano’s summit. Mt. Baker was given the name “White Steep Mountain” by the Indians as a result of this. After Mount St. Helens, Mount Baker has the second-most thermally active crater in the Cascade Range. Mount Baker is the youngest volcano in the Mount Baker volcanic region, located about 30 miles (48 kilometers) east of Bellingham, Whatcom County.

Mt. Baker Volcano was very active in previous decades, but has now been dormant for over 130 years. It is the only volcano in the Cascade Range in the United States that has been impacted by both alpine and continental glaciation. The stratovolcano is mostly made up of andesite lava flows and breccias, and it was formed before the last major glaciation (the Fraser Glaciation), which occurred between 25,000 and 10,000 years ago. Although there has been volcanism here for 1.5 million years, the present volcanic cone is likely no more than 140,000 years old, and probably no more than 80–90,000 years old. Glacial erosion has mostly destroyed older volcanic edifices.

Mount Baker has the most glacier cover of the Cascade Range volcanoes after Mount Rainier; the amount of snow and ice on Mount Baker, 0.43 cu mi (1.79 km3), is greater than the combined volume of all the other Cascade volcanoes (except Rainier). Early settlers in the Puget Sound area saw minor phreatic eruptions in the 19th century. Sherman Crater, the historically active crater immediately south of the summit, has been emitting steam since 1975, but there are no other indications that it will reopen anytime soon. Mount Baker’s most recent major eruption, around 6,700 years ago, started with flank collapse events that culminated in lahars that pushed down the Middle Fork and Nooksack Rivers, as well as down the east flank (damming Baker River and forming Baker Lake), and ended with widespread tephra dropping.

Mt. Baker is also one of the world’s snowiest places; in 1999, Mount Baker Ski Area, located 9 miles (14.5 kilometers) to the northeast, set the world record for total snowfall in a single season (1,140 inches) (29 m; 95 ft). For the last 10,000 years, it has been extremely active. One pyroclastic flow, at least four minor tephra eruptions, at least two lava flows, and at least eight mud flows have occurred during that period. Mud flows are still the most dangerous threat on Mt. Baker. The volcano sits atop the Black Buttes, an older volcanic cone that was active between 500,000 and 300,000 years ago. Most of Mount Baker’s earlier geological record was stripped away by dense ice sheets that filled the valleys and encircled the volcano during the last ice age (which ended 15,000–20,000 years ago).

Lahars, which are caused by the melting of glacial ice on the upper slopes, are the main threat from Mt Baker. Baker is drained by the North Fork Nooksack River in the north, the Middle Fork Nooksack River in the west, and the Baker River in the east. In the event of a new eruption, these valleys are at risk of lahars. The region around the mountain has been mostly ice-free for the last 14,000 years, but the mountain itself is still heavily covered in snow and ice. Mount Baker has not had highly explosive eruptions like those of other volcanoes in the Cascade Volcanic Arc, such as Mount St. Helens, Glacier Peak, or the Mount Meager massif, nor has it erupted regularly, according to deposits dating back 14,000 years.

As a result of magma intruding into the volcano but not erupting, Sherman Crater, just south of the summit, showed signs of renewed volcanic activity in 1975-76. This activity resulted in more intensive monitoring than at any other Cascade Range volcano before it, as well as significant baseline data to which recent research has been compared. Sherman Crater has been the site of increased steam emission since 1975. Lahars or debris flows and debris avalanches have been the most damaging and recurrent occurrences at Mount Baker; many, if not all, of these were not caused by magmatic eruptions, but rather by magma intrusion, steam eruptions, earthquakes, gravitational instability, or probably even heavy rainfall.

Mt. Baker erupted in 1843, killing several fish in the Baker River, causing a massive forest fire, and spewing volcanic ash into the air. Numerous andesitic volcanic centers have emerged and vanished in the region due to glacial erosion from around 900,000 years ago to the present. The Black Buttes edifice, active between 500,000 and 300,000 years ago and once larger than Mount Baker, is the largest of these cones. The Sherman Crater and Dorr fumarole field on the north flank continued to emit steam until the 1940s and 1950s.

In 1891, about 15 km3 (3.6 cu mi) of rock fell producing a lahar that traveled more than 6 mi (9.7 km) and covered 1 sq mi (2.6 km2). While the surveillance was increased as a response of the 1975-76 operation, most of it has been dismantled and monitoring at Mount Baker is now inadequate due to the danger that renewed activity would pose to nearby communities and regional infrastructure. About 6500 years ago, Mount Baker experienced a massive magmatic eruption. Caldera collapse resulted, leaving massive lahar deposits in the Nooksack River valley. Mount Baker is one of a number of Cascade volcanoes whose monitoring systems will be upgraded in the coming years.