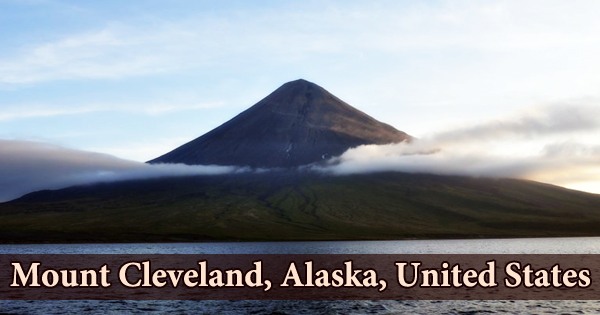 Mount Cleveland, also known as the Cleveland Volcano, is one of the most active volcanoes in the Aleutian Island arc’s core region. It’s a fairly symmetrical stratovolcano on the western end of Chuginadak Island, part of the Islands of Four Mountains about west of Umnak Island in Alaska’s Fox Islands. This volcano is the highest in the “Islands of the Four Mountains” group, with a summit elevation of 1730 meters. Carlisle Island, a stratovolcano to the north-northwest, is also part of this group. Mt. Cleveland stands at 5,675 feet (1,730 meters) and is one of the most active of the Aleutian Arc’s 75 volcanoes.

The island was called after Chuginadak, the Aleutian fire goddess, who they thought inhabited the volcano. Mount Cleveland, a magnificently symmetrical stratovolcano in the central Aleutians, forms the western half of the deserted Chuginadak Island, which is joined to the island’s eastern half by a thin isthmus. It is one of the most active volcanoes in the region, yet there is currently no seismic network in place. Mount Cleveland was named after then-President Grover Cleveland by a team from the United States Coast and Geodetic Survey that visited the island in 1894.

The above-sea-level part of the volcano is around 8.5 kilometers in circumference (5.3 miles) and rises to 1,730 meters in elevation (5,675 feet). Throughout the area’s known history, the volcano has been the location of repeated eruptions. Since 2000, it has erupted numerous times, with ash clouds posing a threat to air traffic between North America and Asia. Cleveland, one of the Aleutian Arc’s most active volcanoes, has erupted at least 22 times in the last 230 years.

Mount Cleveland erupted three times in 2009, twice in 2010, once in 2011, and once each in 2016, 2017 and 2018. The northwestward movement of the Pacific Plate beneath the North American Plate generates magma, which feeds the Cleveland Volcano’s ash and lava eruptions. Subduction melting of materials above and within the lower plate produces magma that can eventually travel to the surface and erupt through a vent as one tectonic plate moves beneath another (such as a volcano). The volcano is mostly dangerous to planes since numerous flights across the north Pacific go close to it, and volcanic ash created by eruptions can harm sensitive electronic equipment and sensors.

The Pacific plate drops steeply into the mantle at the border, forming a subduction zone. The temperature of the plate rises as it descends into the mantle, and part of the rock begins to melt. Melting is aided by water contained in sea bottom sediments carried down with the plate. Because the magma bodies formed by this melting are lighter than the surrounding rock, they will rise to the surface. Magma bodies can cool within the crust before reaching the surface, or they can cause a volcanic explosion. In this situation, the molten material rises to the surface and forms the Aleutian Arc volcano.

The native name for Mount Cleveland, which stands at 1730 meters, is Chuginadak, which refers to the Aleut deity of fire who was considered to live on the volcano. Several huge lava flows have descended the volcano’s steep-sided sides. Mt. Cleveland is said to be losing snow faster than nearby peaks, owing to unusual heat generation. In the 1800s, hot springs were discovered at the base of a volcano on Chuginadak Island. The lower slopes of Mt. Cleveland, like many other Aleutian volcanoes, are more uneven and dissected than the top flanks up to roughly 300 m elevation.

The name of the volcano alludes to its ongoing activity, implying that it was likely very active even in the distant past. An ash plume that rises far into the atmosphere is a significant threat posed by an eruption at Mount Cleveland. Mount Cleveland eruptions in May 2001 generated ash plumes to a height of around 30,000 feet (about 9 kilometers). A lava flow and a hot avalanche reached the water as a result of the eruption. Russian cartographers gave the islands the name “Islands of Four Mountains” in the 19th century, which is the geographic group name for Cleveland and its neighbors.

It was given its current name, Mount Cleveland, by a US Coast and Geodetic Survey mission in 1894, when it was first sighted by the USS Concord. Mount Cleveland began seeping lava in September 2011, signaling that the peak could erupt and send up an ash cloud that could threaten aircraft. Lava is developing in the crater at the summit of 5,675-foot Cleveland Mountain, according to satellite pictures. Mount Cleveland, like all stratovolcanoes, grew layer by layer as explosive eruptions, effusive eruptions, and lahars carved it into a convex shape.

At its base, Mt. Cleveland is 8–8.5 km (5.0–5.3 mi) wide and has a volume of 29 km3 (7 cu mi). The slope of the volcano rises sharply with altitude, from 19° on the lower flanks to 35° towards the top. It is an uninhabited island located in the Aleutian Islands arc at a remote location. Nikolski, about 50 miles (75 kilometers) distant, is the closest settlement. Minor eruptions may have gone missed in the past due to a lack of monitoring in this area. The only reported fatality from an Aleutian eruption occurred in Cleveland in 1944.

Short-lived explosive ash emissions have characterized recent eruptions from Mount Cleveland, which have been accompanied with lava fountaining and lava flows down the sides at times. Cleveland’s flanks, like those of many other Aleutian volcanoes, are particularly rugged up to 300 meters (984 feet), with many overlapping lava flows and debris fans forming an apron around the summit. It has been difficult to attribute eruptive activity to a specific volcano due to the close proximity of multiple volcanoes. Today eruptions in this area are monitored by the Alaska Volcano Observatory (AVO).