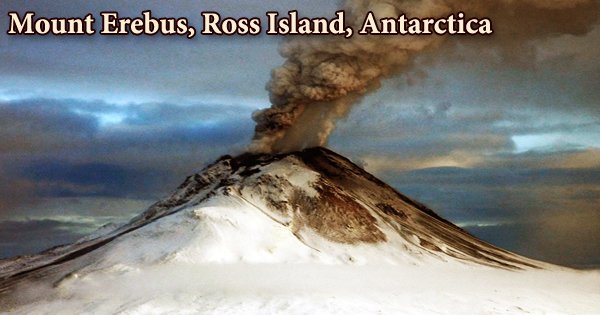 Mount Erebus (/ˈɛrɪbəs/) is the world’s most southerly active volcano. It took 1.3 million years to develop and currently rises at a height of 12,448 feet above sea level. It is the second-highest volcano in Antarctica (after Mount Sidley) and the world’s southernmost active volcano. Its slopes are covered with snow and ice, glaciers, crevasses, and the odd lava flow, yet steam rises from its peak most of the time, indicating the heat beneath.

It is the continent’s sixth tallest extreme peak. It is located in the Ross Dependency on Ross Island, which is also home to three dormant volcanoes: Mount Terror, Mount Bird, and Mount Terra Nova, with a top elevation of 3,794 meters (12,448 feet). If Erebus were a dessert, it would be a reverse-baked Alaska, with a frozen outside and a warm within. Mount Erebus was identified in 1841 and is now the Antarctic continent’s most active volcano. The volcano has been active for roughly 1.3 million years, and a long-lived lava lake has been present in its inner summit crater since at least the early 1970s.

Aside from this magnificent peak, Ross Island is home to a colony of 500,000 Adelie penguins, which may be found all around the Antarctic Peninsula. Mount Erebus, at 3794 meters, is the world’s southernmost active volcano. It dominates Ross Island’s terrain and volcanic structure, and the events that led to their creation are examined in this study, with special attention paid to Esser, Kyle, and McIntosh (2004). A continuous convecting phonolitic lava lake, one of only five long-lasting lava lakes on the planet, may be found at the top.

Strombolian eruptions from the lava lake or one of many secondary vents, all within the volcano’s inner crater, are typical eruptive activity. Mount Erebus is an alkaline intraplate stratovolcano that was formed over several volcanic periods. Lava flows, minor strombolian eruptions, and at least one, perhaps two caldera-forming events have occurred at the top region of Mount Erebus within the last 95,000 years. The volcano’s closeness to McMurdo Station (US) and Scott Base (New Zealand), both located on Ross Island about 35 kilometers apart, helps scientists examine it.

Erebus is a well-studied volcano despite its isolated position and harsh environment, with temperatures averaging negative 4°F in the summer and minus 58°F in the winter. Mount Erebus is a stratovolcano with a polygenetic composition. The shield at the bottom of the volcano is a shield, and the stratocone at the top is a stratocone. The place’s biology has been less well described. This is due to the fact that most living forms on Erebus are tiny.

From a convecting phonolitic lava lake at the foot of the major Crater, the mountain generates periodic strombolian eruptions. The low wide platform shield of Erebus is made up of largely homogeneous and nonviscous basanite lavas, which are the earliest eruptive products. On Fang Ridge, an eroded relic of an early Erebus volcano, and other isolated sites on Erebus’ flanks, somewhat younger basanite and phonotephrite lavas may be found. Erebus is the world’s only phonolite volcano that is now erupting.

The hot soils of Erebus may be found all around the top, most notably at Tramway Ridge. The heat from the volcano melts the ice, producing tiny areas of heated, damp soil that support moss and microbial populations. After the basanite, ava flows of more viscous phonotephrite and trachyte erupted. The top slopes of Mount Erebus are dominated by tephritic phonolite lava flows with large-scale flow levees that dip steeply (approximately 30°). The Terror Rift is closely linked to the volcano. An enormous VEI-6 eruption occurred 18,000 ± 7,000 years ago, forming the peak caldera.

A thermal anomaly has been discovered beneath Ross Island, which is considered to be a mantle plume feature responsible for Ross Island’s volcanism. Mt. Erebus is known for its ice fumaroles, or ice towers, which develop around gases that escape from surface vents. The fumarole ice caves are dark, with oxygenated hydrothermal circulation in strongly reducing host rock, and are found in polar alpine settings devoid of organics.

Bacteria and fungi make up the majority of life. This makes it particularly interesting for research into oligotrophic creatures that can survive on very few nutrients. CO2 fixation is used by the organisms to live, and some may employ CO oxidation for metabolism. Chloroflexi and Acidobacteria are the most common microbes discovered there. This deep, dark environment might be among the planet’s most primitive, and it could be home to life-forms that have been on a distinct evolutionary path for a long time.