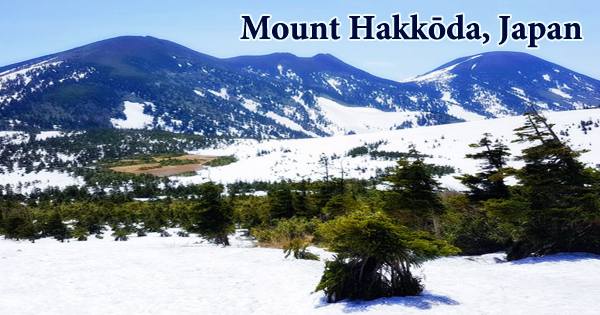 The mountains are together classified as one of the 100 Famous Japanese Mountains and are commonly referred to as Mount Hakkōda (八甲田山, Hakkōda-san) or simply Hakkōda (八甲田). It is part of a group of 18 volcanic mountains in northern Japan that range from 1000 to 1600 meters above sea level. The weather is similar to that of a mountain at 3000 meters altitude, as it is in the north of the archipelago. The Hakkōda Mountains (八甲田山系, Hakkōda-sankei) are an active volcanic complex in Towada-Hachimantai National Park in Aomori Prefecture, Japan. The Tashiro Plateau Wetland is one of many wetlands in the area.

At Ido-dake and adjacent areas, there are fumaroles and hot springs. From the 13th through the 17th century, three minor phreatic eruptions were recorded from Jigoku-numa on the SW flank of Odake volcano. Mount Ōdake, with an elevation of 1,585 meters, is located 21.3 kilometers (13.2 miles) southeast of downtown Aomori and 28 kilometers (17 miles) west of center Towada (5,200 ft). The Hakkoda ropeway provides a simple way for visitors to climb Mount Tamoyachi (at an elevation of 1323 meters (4343 ft)) and its stunning panoramic view.

Sukayu onsen, known for its Sennin-buro (bath of a thousand bathers), sits at the foot of the mountain, ready to relieve travelers’ exhaustion after a day of exploration. The Hakkōda Mountains are part of the u Mountains, which are part of the Pacific Ring of Fire’s Northeastern Japan Arc. The Hakkoda Mountains are packed with skiers and snowboarders in the winter. Many visitors come to observe the soft rime ice features known as snow monsters, therefore snow trekking is also popular.

The volcanic complex is divided into two volcanic groups by fourteen stratovolcanoes and lava domes. The Northern Hakkda Volcanic Group rises from the rim of a Pleistocene caldera with an 8-kilometer (5.0-mile) diameter. The caldera predates the Southern Hakkda Volcanic Group. The Hakkoda Mountains are a volcanic range of mountains. This means that the area is filled with onsen (hot springs). For their baths, all of these onsens employ spring water heated by volcanoes. It’s a terrific way to unwind and soak in nature after a long day of hiking.

The Hakkoda group’s cones tower over an older, 8-kilometer-wide caldera. The Hakkoda group’s northern vents, which are located in the caldera’s center, appear to be younger than the southern group, which buries the SE caldera wall on its SE wall. Climbers, skiers, and sightseers flock to the Hakkda Mountains. In the winter and early spring, the mountains offer significant backcountry skiing. Hakkoda-Odake, Ido-dake, and Tsurugi-dake, which has a 1 km wide explosion crater open to the north, are among the craters with well-preserved morphologies.

Hakkoda Ropeway Station, which can be reached by bus from Shin-Aomori Station on the Tohoku Shinkansen, is the principal destination point for the Hakkoda Mountains area. The Hakkōda Ropeway, a year-round lift in the northern Hakkda Mountains, is used by visitors, and various hiking paths cross the mountains. Despite the lack of technical climbing challenges on the paths, Hakkda poses risks such as volcanic gases, harsh winter weather, and avalanches. Tourists/visitors can get a great view of the area from the top of the ropeway. Maps and information are available in English, Korean, and Chinese at the general information center at the top.

After Mount Iwaki, the Hakkōda Mountains are home to Mount Ōdake, Aomori Prefecture’s second highest peak at 1,585 meters (5,200 ft). The Hakkoda Ski Resort is also located in this area. Only five ski courses are listed, however they include a long woodland route and one that runs directly from the ropeway’s top. Both of these runs provide a close-up glimpse of the snow monsters as well as the experience of skiing through a “tree tunnel” for tourists and visitors. Towada-Hachimantai National Park’s northern section includes the Hakkōda Mountains, Lake Towada, and the Oirase Valley.

When light fog freezes on trees, it creates “snow monsters.” Only a few regions on the planet experience this occurrence. Though the Hakkōda Mountains are made up of several mountains they are often collectively called Mount Hakkōda (八甲田山, Hakkōda-san) or simply Hakkōda (八甲田). The name Hakkōda refers to the mountains’ geographical location and aspect. The name Hakkō (八甲) derives from the fact that eight of the mountains have summits that resemble helmets. The second half of the name da (田) ‘field’ relates to the flat plateaus of the mountains, which are known as 神の田圃 (kami no tano) ‘field of god.’

The Hakkōda Mountains disaster, the worst mountaineering incident in history, is the most well-known incident in mountain history. On the 12th of July 1997, three troops were murdered by CO2 while on a training trip at the northern foot of the Hakkoda volcano. They’d stumbled into a crater filled with dangerous levels of CO2 produced by volcanoes. Some members of the party, as well as those who attempted to rescue them, fell into a depression (18 m long, 11 m wide, and 8 m deep) in the darkness. The men were taken to the hospital on the evening of July 12th, but three of them died.

When the snow melts, the principal activities are hiking and trekking. Lake Towada, Suirennuma Pond, Sukayu Onsen, and, of course, several of the Hakkoda Mountains’ peaks are all accessible through trails. Non-alkali mafic rock, primarily andesite, dacite, and basalt, makes up the volcanic summits. Despite the fact that both groups of mountains developed during the Pleistocene, the southern group is older. The southern group is made up of 700,000 to 1,700,000-year-old rock, whereas the northern group is made up of 13,000 to 700,000-year-old rock near an older caldera’s southwestern rim.

Heavy snowfall and skiing are common in the Hakkoda mountains. The Japanese Meteorology Agency recorded a snowfall of more than 5.6 meters (18.3 feet) in 2013. A pyroclastic flow from Mount Ōdake might travel up to 3.7 kilometers (2.3 miles) and discharge lava up to 3.0 kilometers (1.9 miles) away from the volcano. Mount Takada-peak dake’s migrated 115 meters (377 feet) to the west and grew in elevation by 7 meters (23 feet) due to volcanic deformation, moving it from the border of Aomori and Towada to wholly within the city of Towada.

Hakkoda’s slopes are well-known for being empty and freshly groomed. A Protected Forest has been designated on 6,409.7 hectares (15,839 acres) of territory within the Hakkōda Mountains. It covers nearly half the distance from Mount Dake across the southern Hakkōda Mountains to Lake Towada, and lies largely to the south of that mountain. Because of the variety of forests enclosed within the relatively restricted region of the mountains, it is protected as a Biotic Community Protection Forest. The mountains are home to a diverse range of animals.