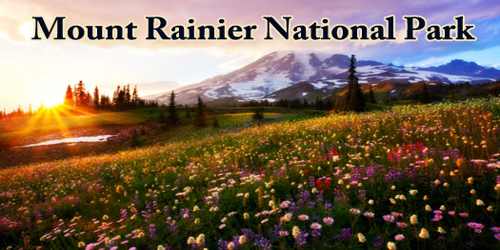 ‘Mount Rainier’ (pronounced: /reɪˈnɪər/), also known as Tahoma or Tacoma, highest mountain (14,410 feet (4,392 meters)) in the state of Washington, U.S., and in the Cascade Range. It is the highest mountain in the U.S. state of Washington, and of the Cascade Range of the Pacific Northwest, the most topographically prominent mountain in the contiguous United States, and the tallest in the Cascade Volcanic Arc. The mountain was originally named Tahoma or “Great Snowy Peak” by the Yakima Indians.

The mountain is several miles taller than the lowlands to the west and one and one-half miles higher than the adjacent mountains! An active volcano, Mount Rainier last erupted approximately 150 years ago. Nearly two million visitors a year come to Mount Rainier National Park for hiking, mountain climbing, backpacking, and more. 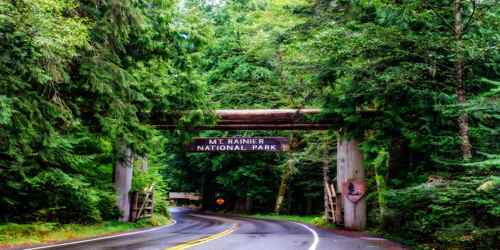 The peak of Mount Rainier was sculpted by ice, and some two dozen named glaciers and a number of smaller patches of permanent ice and snow remain around the summit area. The largest of these is Emmons Glacier along the northeast face. The park’s climate is cool montane, with warm summers and cold winters; elevation considerably affects temperatures. The park region receives large quantities of precipitation annually, especially on the western slope of Mount Rainier. Much of this falls as snow in winter and at higher elevations; snow can occur at any time of year in the summit area. Winter snowfall totals are substantial on the mountain: the ranger station at the Paradise area, on the southern slope, has recorded some of the world’s highest annual totals, which occasionally exceed 80 feet (24 meters).

Ninety-seven percent of the park is preserved as wilderness under the National Wilderness Preservation System as Mount Rainier Wilderness, a designation it received in 1988. It is abutted by the Tatoosh, Clearwater, Glacier View, and William O. Douglas Wildernesses. The park was designated a National Historic Landmark on February 18, 1997, as a showcase for the National Park Service Rustic style architecture of the 1920s and 1930s, exemplified by the Paradise Inn and a masterpiece of early NPS master planning. As a Historic Landmark district, the park was administratively listed on the National Register of Historic Places. The earliest evidence of human activity in the area which is now Mount Rainier National Park, a projectile point dated to circa 4,000–5,800 BP (before present) found along Bench Lake Trail (the first section of Snow Lake Trail).

Nearly three-fifths of the park is forested, with coniferous trees predominating. The lower elevations have dense forests of giant Douglas firs, western red cedars (giant arborvitae), and mountain hemlocks. Other firs and western white pines are among the species at higher elevations up to about 6,000 feet (1,830 meters). Subalpine meadows appear at about 4,500 feet (1,370 meters) and grow more extensive with rising elevation as the trees thin out until they give way to alpine meadows above the timberline at about 7,000 feet (2,130 meters). During the warm months, the subalpine and alpine meadows are covered with wildflowers that bloom progressively higher up the slopes as the summer passes.

The weather in the park is generally cool and rainy even during July and August. While sometimes sunny, park visitors year-round should bring rain gear. The weather up to the peak is unpredictable and ever-changing. All hikers should come prepared and should be smart about choosing to ascend. Check current conditions and have conversations with park rangers who will know up-to-date information about conditions at the peak.

According to the Köppen climate classification system, the best definition for Mount Rainier National Park is the Mediterranean-influenced Subarctic climate (‘’Dsc’’). ‘’Dsc” climates are defined by their coldest month averaging below 0 °C (32 °F), 1-3 months averaging above 10 °C (50 °F), at least three times as much precipitation in the wettest month of winter as in the driest month of summer. According to the United States Department of Agriculture, the Plant Hardiness zone at Sunrise Visitor Center (6,398 feet (1,950 m) elevation) is 6a with an average annual extreme minimum temperature of -5.5 °F (-20.8 °C).

The Paradise visitor area, located 5,400 feet up the mountain’s south side and the park’s most popular destination, is aptly named. Nestled in high alpine meadows, it affords views of Rainier’s peak from so close, it’s easy to imagine that visitors can just reach out and touch it. Trails crisscross the meadows and overlook the Nisqually Glacier that feeds the river of the same name. Climbers aiming for the glacier-gilded peak depart from these very trailheads. Of the more than 10,000 people who attempt a summit every year, only about 5,000 make it to the top. Paradise, near the subalpine valley of the Paradise River, is the location of the historic Paradise Inn (built 1916), Paradise Guide House (built 1920) and Henry M. Jackson Visitor Center (built 1966; demolished and replaced 2008).

On the way up to Paradise, Longmire is home to the year-round National Park Inn, a small museum, and trails departing for meadows, mountain views, and historic homestead remains. On the northeast side of Rainier, the Sunrise area offers a different view of the peak. It’s the highest place accessible by car and, as the name implies, the perfect place to glimpse a sunrise. Marmots large furry rodents with a distinct whistle frequent the high, rocky landscape.

Sunrise (46.91°N 121.64°W) is a lodge and visitor center located in the northeastern part of the park. At an elevation of 6,400 feet (1,950 m), it is the highest point in the park that is accessible by vehicle. There are miles of trails located all around Sunrise, such as Mount Fremont, Burroughs Mountain, and Sourdough Ridge. The lodge is reachable via a 10-mile (16 km) turnoff from SR 410 near the White River entrance. 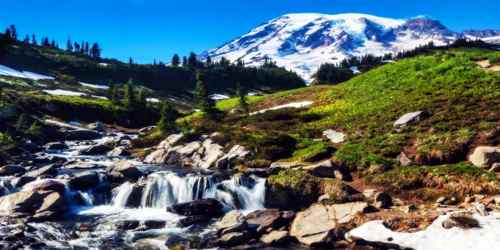 The park, with its close proximity to the nearby Puget Sound urban area, is a popular destination for visitors. It is one of the country’s premier areas for hiking and mountain climbing. In addition to an extensive system of hiking trails within the park, the Pacific Crest National Scenic Trail skirts portions of the park’s eastern boundary. There are several paved-road access points on the eastern and southern sides of the park.

Mount Rainier National Park closed because of extensive flooding as a result of the 6 November 2006 Pineapple Express rainstorm when 18 inches (460 mm) of rain fell in a 36-hour period. Campsites and roads throughout the park were washed away. Power to Paradise and Longmire was disrupted. Sunshine Point Campground, just inside the Nisqually Entrance, was destroyed and has not reopened. On 5th May 2007, the park reopened to automobile traffic via State Route 706 at the Nisqually Entrance.

A popular activity, wilderness camping is allowed in the park only when a permit has been obtained. The park also has three car camping sites, as well as designated tent camping opportunities along trails. All require reservations.

Three visitor’s centers east on Sunrise Ridge, southeast on the Ohanapecosh River, and at the Paradise area are open during the warmer months, as is the Paradise Inn (built 1916), one of the most renowned of the U.S. national park lodges. Park headquarters are located at Ashford, just southwest of the park.

The Carbon River Entrance Station is located in the northwest corner of the park off Highway 165 and is the site of the only rainforest at Mount Rainier. There is a campground and a short trail through the rainforest, as well as a trail to the Carbon Glacier, one of the lowest glaciers in the contiguous United States.

Mowich Lake is the largest and deepest lake in the park, located south of Carbon at the south end of Highway 165. A campground, picnic area, and hiking trail are located near the lake.