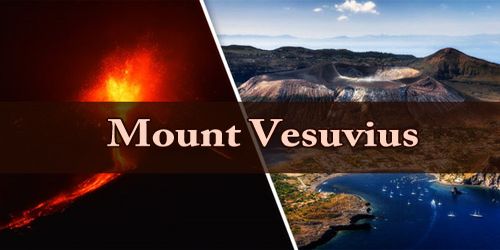 Mount Vesuvius (/vɪˈsuːviəs/ viss-OO-vee-əs; Italian: Monte Vesuvio Italian pronunciation: (ˈmonte veˈzuːvjo; -suː); Neapolitan: Muntagna Vesuvio (munˈdaɲːə vəˈsuːvjə); Latin: Mons Vesuvius (mõːs wɛˈsʊwɪ.ʊs); also Vesevus or Vesaevus in some Roman sources), is an active volcano that rises above the Bay of Naples on the plain of Campania in southern Italy. It is the only active volcano on mainland Europe. It is best known because of the eruption in A.D. 79 that destroyed the cities of Pompeii and Herculaneum, but Vesuvius has erupted more than 50 times. Vesuvius consists of a large cone partially encircled by the steep rim of a summit caldera caused by the collapse of an earlier and originally much higher structure. 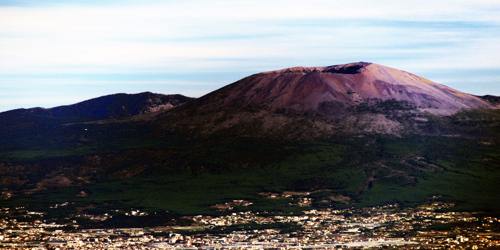 Vesuvius is most famous for the 79 AD eruption which destroyed the Roman cities of Pompeii and Herculaneum. The eruption ejected a cloud of stones, ashes, and volcanic gases to a height of 33 km (21 mi), erupting molten rock and pulverized pumice at the rate of 6×105 cubic meters (7.8×105 cu yd) per second, ultimately releasing 100,000 times the thermal energy released by the Hiroshima-Nagasaki bombings. More than 1,000 people died in the eruption, but exact numbers are unknown. The only surviving eyewitness account of the event consists of two letters by Pliny the Younger to the historian Tacitus. Though the volcano’s last eruption was in 1944, it still represents a great danger to the cities that surround it, especially the busy metropolis of Naples.

Vesuvius has erupted many times since and is the only volcano on the European mainland to have erupted within the last hundred years. Today, it is regarded as one of the most dangerous volcanoes in the world because of the population of 3,000,000 people living near enough to be affected, with 600,000 in the danger zone, making it the most densely populated volcanic region in the world, as well as its tendency towards violent, explosive eruptions of the Plinian type.

Vesuvius is part of the Campanian volcanic arc, a line of volcanoes that formed over a subduction zone created by the convergence of the African and Eurasian plates. This subduction zone stretches the length of the Italian peninsula and is also the source of other volcanoes like Mount Etna, the Phlegraean Fields (Campi Flegrei), Vulcano, and Stromboli. Under Vesuvius, the lower part of the subducting slab has torn and detached from the upper part to form what is called a “slab window.” This makes Vesuvius’ rocks slightly different chemically from the rocks erupted from the other Campanian volcanoes.

The height of the cone in 2013 was 4,203 feet (1,281 meters), but it varies considerably after each major eruption. At about 1,968 feet (about 600 meters), a high semicircular ridge, called Mount Somma, begins, girding the cone on the north and rising to 3,714 feet (1,132 meters). Between Mount Somma and the cone is the Valle del Gigante (Giant’s Valley). At the summit of the cone is a large crater about 1,000 feet (about 305 meters) deep and 2,000 feet (about 610 meters) across; it was formed in the eruption of 1944. More than two million people live in the vicinity of Vesuvius and on its lower slopes. There are industrial towns along the coast of the Bay of Naples and small agricultural centers on the northern slopes.

The Romans regarded Mount Vesuvius to be devoted to Hercules. The historian Diodorus Siculus relates a tradition that Hercules, in the performance of his labors, passed through the country of nearby Cumae on his way to Sicily and found there a place called “the Phlegraean Plain” (Φλεγραῖον πεδίον, “plain of fire”), “from a hill which anciently vomited out a fire now called Vesuvius.” It was inhabited by bandits, “the sons of the Earth,” who were giants. With the assistance of the gods, he pacified the region and went on. The facts behind the tradition, if any, remain unknown, as does whether Herculaneum was named after it. An epigram by the poet Martial in 88 AD suggests that both Venus, patroness of Pompeii, and Hercules were worshipped in the region devastated by the eruption of 79.

Mount Vesuvius is considered to be one of the most dangerous volcanoes in the world because of its proximity to the city of Naples and the surrounding towns on the nearby slopes. The volcano is classed as a complex stratovolcano because its eruptions typically involve explosive eruptions as well as pyroclastic flows. A pyroclastic flow is a high-density mix of hot lava blocks, pumice, ash, and volcanic gas, according to the U.S. Geological Survey. Vesuvius and other Italian volcanoes, such as Campi Flegrei and Stromboli, are part of the Campanian volcanic arc. The Campanian arc sits on a tectonic boundary where the African plate is being subducted beneath the Eurasian plate. 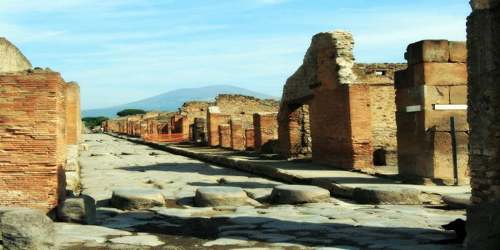 Vesuvius probably originated somewhat less than 200,000 years ago. Although a relatively young volcano, Vesuvius had been dormant for centuries before the great eruption of 79 CE that buried the cities of Pompeii, Oplontis, and Stabiae under ashes and lapilli and the city of Herculaneum under a mudflow. The writer Pliny the Younger, who was staying at a place west of Naples, gave an excellent account of the catastrophe in two letters to the historian Tacitus. Between the years 79 and 1037, several eruptions were reported, which include those occurring in 203, 472, 512, 685, 787, 968, 991, 999, and 1007. The explosions of 512 were so severe that Theodoric the Goth released the people living on the slopes of Vesuvius from payment of taxes.

Mount Vesuvius destroyed the city of Pompeii, a city south of Rome, in A.D. 79 in about 25 hours, according to History. Because the city was buried so quickly by volcanic ash, the site is a well-preserved snapshot of life in a Roman city. The eruption is one of the most well-known ancient eruptions in the world and may have killed more than 16,000 people. Ash, mud, and rocks from this eruption buried the cities of Pompeii and Herculaneum. Pompeii is famous for the casts the hot ash formed around victims of the eruptions. The unfortunate people suffocated on ash in the air, which then covered them and preserved amazing details of their clothing and faces. It is believed that around 30,000 people died from the eruption of Vesuvius in 79.

The volcano erupted again in 1631, six times in the 18th century (including 1779 and 1794), eight times in the 19th century (notably in 1872), and in 1906, 1929 and 1944 during World War II. There have been no eruptions since 1944, and none of the eruptions after AD 79 were as large or destructive as the Pompeian one. On occasion, eruptions from Vesuvius have been so large that the whole of southern Europe has been blanketed by ash; in 472 and 1631, Vesuvian ash fell on Constantinople (Istanbul), over 1,200 kilometers (750 mi) away. A few times since 1944, landslides in the crater have raised clouds of ash dust, raising false alarms of an eruption.

A scientific study of the volcano did not begin until late in the 18th century. An observatory was opened in 1845 at 1,995 feet (608 meters), and in the 20th century, numerous stations were set up at various heights for making volcanologic measurements. A large laboratory and a deep tunnel for seismo-gravimetric measurements were also built. The most serious earthquake rocked Naples in October 1999. The magnitude-3.6 quake was felt as far as 15 miles (24 km) from the base of the volcano and was of the same magnitude as a quake that occurred 17 years prior to the last truly major explosion that devastated Naples in 1631.

The area around Vesuvius was officially declared a national park on June 5, 1995. The summit of Vesuvius is open to visitors and there is a small network of paths around the volcano that are maintained by the park authorities on weekends. There is access by road to within 200 meters (660 ft) of the summit (measured vertically), but thereafter access is on foot only. There is a spiral walkway around the volcano from the road to the crater. The first funicular cable car on Mount Vesuvius opened in 1880. It was later destroyed by the March 1944 eruption. “Funiculì, Funiculà”, a Neapolitan language song with lyrics by journalist Peppino Turco set to music by composer Luigi Denza, commemorates its opening.