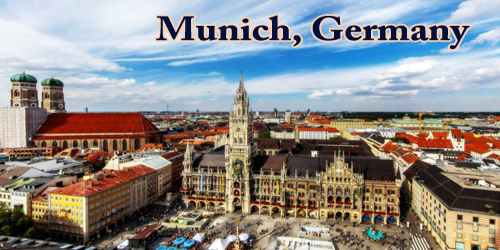 Munich (/ˈmjuːnɪk/ MEW-nik; German: München (ˈmʏnçn̩); Bavarian: Minga (ˈmɪŋ(ː)ɐ); Latin: Monachium) city, capital of Bavaria Land (state), southern Germany. It is Bavaria’s largest city and the third-largest city in Germany (after Berlin and Hamburg). Munich, by far the largest city in southern Germany, lies about 30 miles (50 km) north of the edge of the Alps and along the Isar River, which flows through the middle of the city.

With a population of 1.5 million people and a thriving economy, Munich offers an intriguing vibe for locals and visitors alike. It’s an amazing city that shows its glow from spring to autumn when the weather is at its best. Long summer days are the ideal time for making the most of Munich’s great outdoor lifestyle. 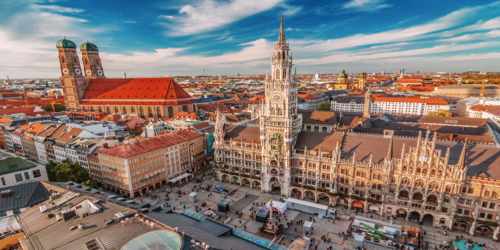 The city was first mentioned in 1158. Catholic Munich strongly resisted the Reformation and was a political point of divergence during the resulting Thirty Years’ War, but remained physically untouched despite an occupation by the Protestant Swedes. Once Bavaria was established as a sovereign kingdom in 1806, Munich became a major European center of arts, architecture, culture, and science. In 1918, during the German Revolution, the ruling house of Wittelsbach, which had governed Bavaria since 1180, was forced to abdicate in Munich and a short-lived socialist republic was declared. In the 1920s, Munich became home to several political factions, among them the NSDAP. After the Nazis’ rise to power, Munich was declared their “Capital of the Movement”. The city was heavily bombed during World War II but restored most of its traditional cityscape. After the end of postwar American occupation in 1949, there was a great increase in population and economic power during the years of Wirtschaftswunder, or “economic miracle”. The city hosted the 1972 Summer Olympics and was one of the host cities of the 1974 and 2006 FIFA World Cups.

Munich, or München (“Home of the Monks”), traces its origins to the Benedictine monastery at Tegernsee, which was probably founded in 750 CE. In 1157 Henry the Lion, Duke of Bavaria, granted the monks the right to establish a market where the road from Salzburg met the Isar River. A bridge was built across the Isar the following year, and the marketplace was fortified.

In 1255 Munich became the home of the Wittelsbach family, which had succeeded to the duchy of Bavaria in 1180. For more than 700 years the Wittelsbachs would be closely connected with the town’s destiny. In the early 14th century the first of the Wittelsbach line of Holy Roman emperors, Louis IV (Louis the Bavarian), expanded the town to the size at which it remained up to the end of the 18th century. Under the Bavarian elector Maximilian I (1597–1651), a powerful and effective ruler, Munich increased in wealth and size and prospered until the Thirty Years’ War. It was occupied by the Swedes under Gustav II Adolf (Gustavus Adolphus) in 1632, and in 1634 a plague epidemic resulted in the death of about one-third of its population.

Under the regency of the Bavarian electors, Munich was an important center of Baroque life but also had to suffer under Habsburg occupations in 1704 and 1742. In 1806 the city became the capital of the new Kingdom of Bavaria, with the state’s parliament (the Landtag) and the new archdiocese of Munich and Freising being located in the city. Twenty years later, Landshut University was moved to Munich. Many of the city’s finest buildings belong to this period and were built under the first three Bavarian kings. Especially Ludwig I rendered outstanding services to Munich’s status as a center of the arts, attracting numerous artists and enhancing the city’s architectural substance with grand boulevards and buildings. On the other hand, Ludwig II, known the world over as the fairytale king, was mostly aloof from his capital and focused more on his fanciful castles in the Bavarian countryside. Nevertheless, his patronage of Richard Wagner secured his posthumous reputation, as do his castles, which still generate significant tourist income for Bavaria. Later, Prince Regent Luitpold’s years as regent were marked by tremendous artistic and cultural activity in Munich, enhancing its status as a cultural force of global importance.

The city’s population of 100,000 in 1854 grew to 500,000 by 1900. Munich’s cultural importance in Europe was enhanced when Louis II, by his championing of the composer Richard Wagner, revived its fame as a city of music and the stage. The rule of the Wittelsbach dynasty finally ended with the self-imposed exile of Louis III in November 1918, and, in the aftermath of World War I, Munich became a hotbed of right-wing political ferment. It was in Munich that Adolf Hitler joined the Nazi Party and became its leader. The beer cellar where he held meetings that led to the Beer Hall Putsch (“rising”) against the Bavarian authorities in November 1923 can still be seen. In World War II Munich suffered heavily from Allied bombing raids, which destroyed more than 40 percent of its buildings.

The city is known as the site of the culmination of the policy of appeasement by Britain and France leading up to World War II. It was in Munich that British Prime Minister Neville Chamberlain assented to the annexation of Czechoslovakia’s Sudetenland region into Greater Germany in the hope of satisfying the desires of Hitler’s Third Reich.

Munich was the base of the White Rose, a student resistance movement from June 1942 to February 1943. The core members were arrested and executed following a distribution of leaflets in Munich University by Hans and Sophie Scholl. The city was heavily damaged by Allied bombing during World War II, with 71 air raids over five years.

In the past, Munich suffered economically because of its distance from seaports and from the coal mines of the Ruhr region. But this situation improved when fuels other than coal came into general use. Munich shifted from heavy to light industry, to the manufacture, for example, of precision instruments, optical and electrical appliances, and aerospace and other high-technology products, as well as to the production of food, cosmetics, and clothing. The city has several of the largest breweries in Germany and is famous for its beer and its annual Oktoberfest celebration. Munich is a major tourist destination and a convention center. Book publishing and printing and television production are also important. The city is a center of the banking and financial industry, and it has one of the largest wholesale markets in Europe for fruit, vegetables, and animal produce.

Today, Munich is a global center of art, science, technology, finance, publishing, culture, innovation, education, business, and tourism and enjoys a very high standard and quality of living, reaching first in Germany and third worldwide according to the 2018 Mercer survey, and is rated the world’s most liveable city by the Monocle’s Quality of Life Survey 2018. According to the Globalization and World Rankings Research Institute, Munich is considered an alpha world city, as of 2015. It is one of the most prosperous and fastest-growing cities in Germany.

Munich’s economy is based on high tech, automobiles, the service sector, and creative industries, as well as IT, biotechnology, engineering, and electronics among many others. The city houses many multinational companies, such as BMW, Siemens, MAN, Linde, Allianz, and MunichRE. It is also home to two research universities, a multitude of scientific institutions, and world-class technology and science museums like the Deutsches Museum and BMW Museum. Munich’s numerous architectural and cultural attractions, sports events, exhibitions, and its annual Oktoberfest attract considerable tourism. The city is home to more than 530,000 people of foreign background, making up 37.7% of its population.

Munich is connected by rail to all the main cities of Germany and Austria, and it is a major hub for the German and European high-speed passenger rail system. Autobahnen (expressways) from Stuttgart, Nürnberg, and Salzburg converge on the city. Franz Josef Strauss Airport, located 17 miles (27 km) northeast of Munich, opened in 1992. A modern subway has been built in the city.

A way to discover the city’s flair is to enjoy the beer gardens and get active in the city’s parks. A stroll in the English Garden, a bike ride along the Isar or a train trip to the surrounding lakes are just a few of the activities visitors can do. 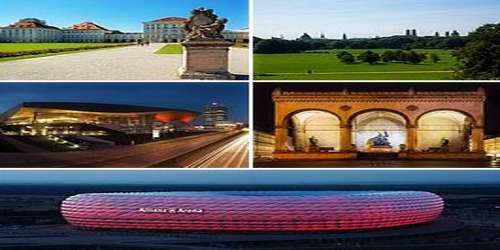 Munich has some outstanding museums and art galleries. The Alte Pinakothek, part of the Bavarian State Picture Galleries, houses the art treasures accumulated by the Wittelsbach family since the 16th century. Its collections of Renaissance-era German and Dutch paintings and Flemish Baroque paintings are especially strong, with many masterpieces by Albrecht Dürer, Peter Paul Rubens, and Anthony van Dyck. In addition to the Alte Pinakothek and the Glyptothek, there are the Neue (New) Pinakothek, which houses Munich’s main collection of 19th- and 20th-century art; the Bavarian National Museum, which contains German art and applied art since the Middle Ages; and the Residence Museum, which has paintings, sculpture, furniture, and ceramics. The Deutsches Museum, on an island in the Isar River, is a huge and comprehensive museum of science, engineering, and technology with a notable library. There are also the State Gallery of Modern Art and numerous small art galleries.

Starnberg See, Tegernsee, Schliersee or Chiemsee are top destinations that visitors or travelers can visit by public transport on a day trip from Munich. With its many cultural and natural attractions, Munich is a delight for both culture and outdoor enthusiasts that will not disappoint.