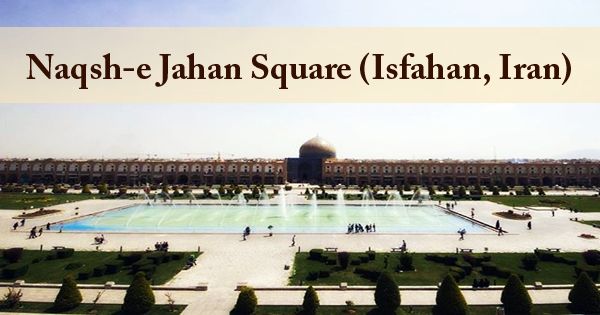 The world pattern, or as the Iranians would term it, Naqsh-e Jahan Square (Persian: میدان نقش جهان‎ (Maidān-e Naghsh-e Jahān); “Image of the World Square”), shows the splendor of the fifth Safavid ruler, Shah Abbas the Great. It is also known as the Imam Square (میدان امام), and Shah Square (میدان شاه) prior to 1979, is a square situated at the center of Isfahan, Iran. It was started in 1601 and completed during the reign of Abbas The Great in 1636 (Safavid era). This square’s design makes it unique in its form. Now a major historical site, it is one of the UNESCO World Heritage Sites. For more than 400 years, Naqsh-e Jahan Square has existed. 83500 square meters is the arena of this magnificent square. Naqsh-e Jahan Square currently has a greater area than most of the world’s popular squares. 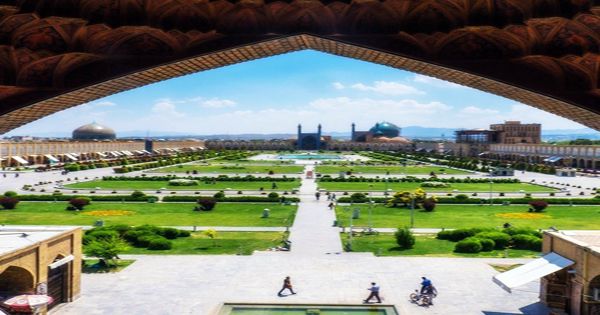 There is a Bazar, a religious center (mosque), and a government center within the architecture of Iranian squares. A rectangle 520 ft (160 meters) wide and 1,840 ft (560 meters) long is its shape. It’s situated in the city center of Isfahan. Among all the great squares in the world, ‘Naqsh-e Jahan Square’; ‘Place des Vosges’, the masterpiece of French architecture, ‘La piazza San Marco’ in Venice, the ‘Plaza Mayor de Salamanca’ in Spain, and it has a distinct architectural feature and a special language. Situated on the south side of this square is the Shah Mosque. Ali Qapu Palace is on the west side. On the eastern side of this square, Sheikh Lotf Allah Mosque is located, and the Qeysarie Gate opens into the Isfahan Grand Bazaar on the northern side.

In the 17th century, the square was one of the largest and most elegant squares in the world. Today, in the Shah Mosque, Namaaz-e Jom’eh (the Muslim Friday prayer) is being held. On the reverse of an Iranian banknote of 20,000 rials, the square is depicted. The square has been used throughout history to conduct all forms of festivals, parades, and ceremonies, such as national, governmental, and common ceremonies. This square is also just about right for a polo game. At the north and south ends of Naqsh-e Jahan Square, the stone goal posts still remain. It was a perfect place for people to stroll and shop and keep the big Jome Bazaar on the other days (open space market in Fridays). 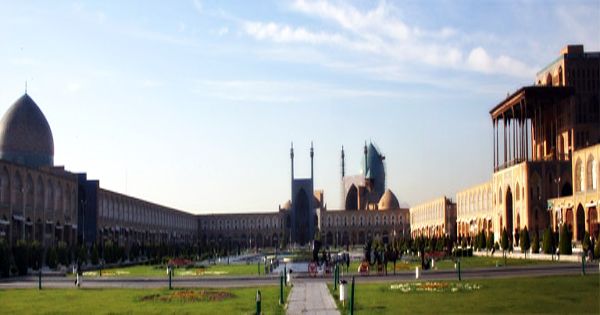 The ingenuity of the square, or Maidan, was that Shah Abbas would collect in his own backyard the three key components of power in Persia by constructing it the power of the clergy, embodied by the Masjed-e Shah, the power of the merchants, represented by the Imperial Bazaar, and of course, the power of the Shah himself, residing in the Palace of Ali Qapu. For now, on special occasions, Naqsh-e Jahan Square or Imam Square is only used for holding ceremonies and parades. All around the square, there are typical shops for visitors/travelers to explore. Carriage rides are also a great way to see Naqsh-e Jahan Square’s elegance.

Many scholars have also asked about the unusual orientation of the Maidān. This square did not lie in alignment with Mecca, unlike most significant buildings, so that when you reach the entrance portal of the Shah Mosque, you make, almost without realizing it the half-right turn that allows the main court to face Mecca. The majority of which have been turned into art shops, busy markets, cafes, and restaurants with the existence of the chambers. The historic Naqsh-e Jahan Square, a crowded mosque, is also becoming a lively and vibrant location. It is one of the first UNESCO sites registered in 1979 to be included in the list.