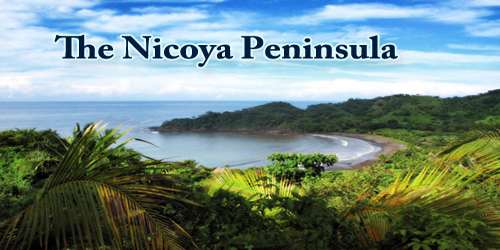 The Nicoya Peninsula (Spanish: Península de Nicoya) is the largest peninsula in Costa Rica. At 37 miles (60 km) wide and 75 miles (121 km) long, it is large and somewhat isolated, with a stretch of coastline that rivals any in the country. It is divided into two provinces: Guanacaste Province in the north, and the Puntarenas Province in the south. It is located at 10°N 85.4166667°W. It is known for its beaches and is a popular tourist destination.

On the Pacific Coast of Costa Rica, the Nicoya Peninsula is a hot spot for surfers and eco-tourists, with its pockets of jungly forests and long beaches washed by perfect barrel breaks. Surfing can be great at any time of year. The Pacific Ocean here is warm and clear and dotted with islands that at one time were mountains. 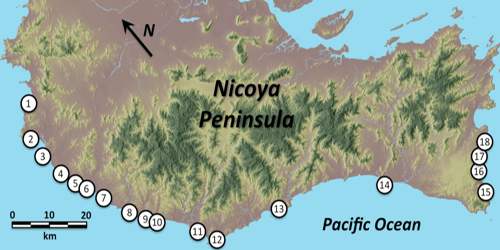 The coastal towns are muy tranquilo places where the time of day isn’t nearly as important as the type of wave that’s breaking. Prime tourist towns in the region include Tamarindo, the most developed town on the peninsula, with fantastic surfing for all skill levels at Playa Tamarindo, as well as a wide range of restaurants and hotels. It lures a colorful mix of fun-loving backpackers, surfers, families, and chilled-out expats. Around Tamarindo you can snorkel, dive, horseback ride, zipline, and watch turtles nesting from October through March at nearby Playa Grande, one of Costa Rica’s most important nesting grounds for leatherback turtles.

The main transport and commercial center in the region is Nicoya, one of the oldest settlements in Costa Rica. Ferries run between the town of Puntarenas on the mainland and the Nicoya Peninsula. There is an international airport in Liberia and small domestic airstrips in Nosara, Carrillo, and Tambor. The region was also featured in the book Blue Zones, by Dan Buettner, which focused on the longevity found among Nicoya’s residents.

The Nicoya Peninsula has long played an important role in Costa Rica’s history. Following Central America’s independence from Spain in 1821, the peninsula and much of northwestern Costa Rica too became a province of the newly formed Nicaragua. Guanacaste, the name originally given to the area that’s still retained today, again traded hands in 1824 when the locals opted to secede from Nicaragua and join Costa Rica. The Guanacaste locals are proud of their history; visitors can still see the province flag waving from many businesses and homes.

Until recently, development in the area was slow. Bad roads and slow ferries made it hard to get to many places on the peninsula. Small towns retained their decidedly local, backwater feeling. All that is changing, however, with better infrastructure including the recently constructed Friendship Bridge and new international airport in Liberia and more willingness by ticos to cater to the tourist trade. With these improvements, more travelers are deciding to make Nicoya a part of their trip-and for good reason. There are beaches to bum and waves to surf, parks to explore and sunsets to capture.

Other notable settlements and places of interest in the area include (going roughly from north to south): Tamarindo, Santa Cruz, Nosara, Sámara, Naranjo, Paquera, Curu, Tambor, Montezuma, Santa Teresa, Mal Pais. Another very special place is Ostional Wildlife Refuge, is the second-largest beach where the turtles come to nest. One of their biggest nesting years had over 500,000 females come ashore to nest in one season. This refuge works in with the Nancite beach at Santa Rosa National Park. These two protected areas are two of the most important areas for the nesting of Olive Ridley turtles (Lepidochelys olivacea). Two other common species of turtles that nest here are the leatherback turtles (Dermmochelys coriacea) and the Pacific green turtle (Chelonia mydas agassizii).

Upscale Santa Teresa in Mal Pais, along the peninsula’s southwest corner, is also known for its fantastic surf, as well as yoga retreats, organic eateries, and boutique hideaways. Other prime areas to consider are beautiful Nosara, backed by a tangle of green forest; Montezuma; and peaceful Samara, one of the peninsula’s least developed towns. Not far from these beach towns, the Monteverde Cloud Forest Reserve protects one of the continent’s last unspoiled pockets of cloud forest. 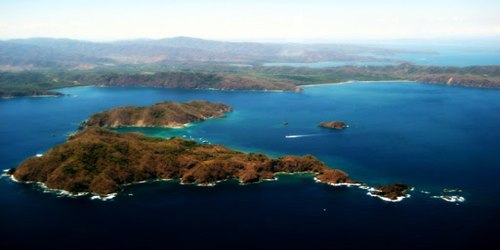 The Nicoya Peninsula has beaches from tip to tip. Although there is variety in both sand color and surfing quality, most beaches are gorgeous and easygoing. Visitors can find secluded spots beneath palm trees and behind rocks, or else lay out in the broad sandy expanse and soak up the sun. The surfing off the coast is some of the best in Costa Rica and there are areas that are good for both snorkeling and swimming as well. What’s more, most beaches are within striking distance of towns, making it easy to stock up on provisions or take a break for happy hour.

There are a number of nature reserves and wildlife refuges such as Cabo Blanco, Camaronal, Cueva Murciélago, Curú, La Ceiba, Romelia and the Diria National Park, as well as the projects on the islands of the adjacent Gulf of Nicoya.

The water around the islands is often shallow and rich with nutrients. This makes it prime real estate for mangroves and the species that live within them. Indeed, these mangroves play a huge role in the vitality of the Nicoya’s ecosystem, as they provide habitat for birds, reptiles, and fish. Because of this, the Costa Rican government have established them as protected territory.

The Nicoya Peninsula is considered by Quest Network one of the Blue Zones in the world, where people commonly live active lives past the age of 100 years.