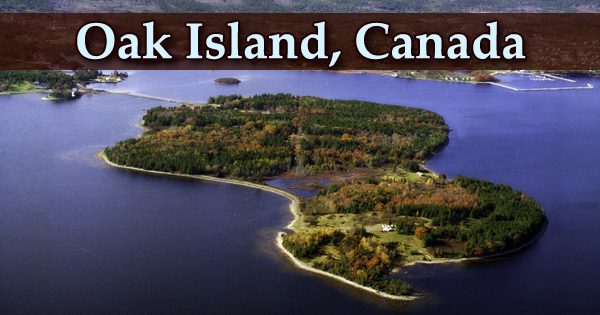 Oak Island is one of the 300-plus islands that make up Mahone Bay, which is located on the south side of Nova Scotia’s Atlantic coast. The island is a 57-hectare (140-acre) privately owned island off the coast of Nova Scotia, Canada, in Lunenburg County. Because of the legends and myths that have emerged about the island since the late 18th century, many people believe there is a great treasure hidden on the 140-acre forest-covered area. A causeway and gate connect the island to the mainland, which is 200 meters (660 ft) away.

Oak Island has always been shrouded in mystery. It was the only site in the vicinity covered in red oak trees from the time it was discovered. The island is primarily known for different theories about buried wealth or historical items, as well as the exploration that has accompanied them. A stone recovered 90 feet deep during an early excavation expedition carried a strange writing that one decoder interpreted as “Ten feet below two million lies buried.”

Legends on the island include hauntings and odd lights, as well as a widely held belief that no treasure will be discovered until seven treasure hunters have perished trying to uncover it. At this time, the toll stands at six. Daniel McGinnis, at 16 years old, discovered a mystery filled-in corridor with a pulley system descending into the earth in 1795. Three trees formed a triangle on either side of the opening, with symbols etched into their bases. All it took was for rumors to spread that infamous pirate Captain Kidd had landed on Oak Island and buried the wealth he had looted on his many journeys.

McGinnis’ first excavations with his buddies turned up nothing except rotting wood platforms spaced three meters apart down the shaft’s entire length, but that was enough to catch the public’s enthusiasm. Since 1857, stories and rumors about the treasure have been published, generating documentaries, movies, and TV shows, including the most current History channel reality show The Curse of Oak Island.

Soon later, a new party of treasure hunters arrived, persuaded that the ‘Money Pit’ was the location of long-lost buried wealth, maybe belonging to Captain Kidd or Blackbeard. They also claimed to have discovered a flagstone inscribed with symbols that translated to “forty feet below, two million pounds lie buried,” according to an amateur cryptologist.

The climate in the bulk of Nova Scotia is humid continental, with hot and humid summers and freezing or severe winters. While there are no meteorological stations on the island or in Mahone Bay, there is one in Bridgewater, which is located to the west. Between 1762 and 1765, the island, which is roughly a mile long by less than a half-mile wide, was originally surveyed and divided into 32 four-acre lots.

According to D’Arcy O’Connor, author of The Secret Treasure of Oak Island: The Amazing True Story of a Centuries-Old Treasure Hunt, though a 1776 map by British cartographer J.F.W. Des Barres called it Gloucester Isle, the name “Oak Island” had been used on land-transfer titles long before that time. The ocean has an impact on visibility on Oak Island, as the southern shores of Nova Scotia can be obscured by fog for up to 90 days a year. Powerful storms, such as nor’easters and hurricanes, are also a threat along these coasts.

Despite the difficulties and danger (six men have died while digging), numerous determined efforts to uncover Oak Island’s treasure have been made over the past 200 years, gaining the attention of US President Franklin D. Roosevelt. The temperate broadleaf and mixed forest that covers Oak Island is known as the New England/Acadian woodlands in the region. Great blue herons, black guillemots, osprey, Leach’s storm petrels, and razorbills can all be found in the Mahone Bay area.

Roosevelt visited the island as a young man while working as a law clerk, and he followed the quest of other treasure hunters for decades after that. J. W. Goldthwait of the Geological Survey of Canada originally mapped the geology of Oak Island in 1924, seeing the island as a composite of four drumlins. These drumlins, which are “elongated hills” made up of numerous layers of till sitting on bedrock, date from various glacial advances over the last 75,000 years.

The “Lawrencetown” and slate until layers on top of the bedrock are the most common. The former is a type of clay till that is 50 percent sand, 30 percent silt, and 20 percent clay. Underneath Oak Island, there are two types of bedrock: “Mississippian Windsor Group limestone” and gypsum in the southeast, and Cambro-Ordovician Halifax Formation slate in the northwestern. Several companies, notably the Old Gold Salvage and Wrecking Company, began mining in the Money Pit and its surrounding region in the early 1800s, according to Gordon Fader and Joy A. Steele, authors of The Oak Island Mystery Solved.

The least ludicrous thing the island is said to have to offer is pirate riches. Oak Island is also thought to contain Spanish naval wealth, British imperial treasure, a Viking ship, Marie Antoinette’s jewels, Shakespeare’s manuscripts, and the Holy Grail or Ark of the Covenant. Two permanent dwellings and two cottages are occupied part-time on Oak Island, which is populated on a seasonal basis. While the island is still privately owned, people who book trips ahead of time have access to it.

Quicksand and sinkholes cover Oak Island, giving the impression that the soil has been disturbed and that something is buried under it. It’s also why prior investigations’ tunnels and excavation were prone to collapse and significant levels of risk due to the ground’s instability. On a beach dubbed “Smith’s Cove,” there has been searcher activity. There were several things discovered there, including non-native coconut fiber. A supposedly pre-15th-century lead cross and various wooden earthworks have been discovered more recently in the Smith’s Cove region.

The Lagina brothers continue their search for riches on Oak Island today, and are unlikely to stop until the riddle of the money pit is solved, according to The History Channel’s famous TV series “The Curse of Oak Island.” Centuries-old coins, an antique brooch, and a lead crucifix supposedly created between 1200 and 1600 A.D. have all been reported in the series. Human bones from Europe and Turkey were discovered on the island, indicating that the Knights Templar, as well as pirates and Spanish naval ships, most certainly passed through.