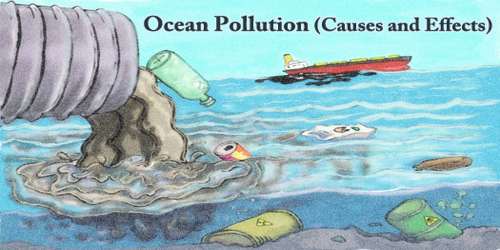 Ocean pollution, also known as marine pollution, is a growing problem in today’s world. Our ocean is being flooded with two main types of pollution: chemicals and trash. Since oceans provide the home to wide variety of marine animals and plants, it is the responsibility of every citizen to play his or her part in making these oceans clean so that marine species can thrive for a long period of time.

We might think that in order to pollute the ocean we had have to dump bad materials directly into it. But in fact, 80% of ocean pollution comes from land. This means that to keep pollution from the ocean we have to be aware of all of our actions.

According to National Geographic,

“Many ocean pollutants are released into the environment far upstream from coastlines. Nitrogen-rich fertilizers applied by farmers inland, for example, end up in local streams, rivers, and groundwater and are eventually deposited in estuaries, bays, and deltas. These excess nutrients can spawn massive blooms of algae that rob the water of oxygen, leaving areas where little or no marine life can exist.”

Although marine pollution has a long history, significant international laws to counter it were not enacted until the twentieth century. Marine pollution was a concern during several United Nations Conventions on the Law of the Sea beginning in the 1950s. Most scientists believed that the oceans were so vast that they had unlimited ability to dilute, and thus render pollution harmless.

In the late 1950s and early 1960s, there were several controversies about dumping radioactive waste off the coasts of the United States by companies licensed by the Atomic Energy Commission, into the Irish Sea from the British reprocessing facility at Windscale, and into the Mediterranean Sea by the French Commissariat à l’Energie Atomique. After the Mediterranean Sea controversy, for example, Jacques Cousteau became a worldwide figure in the campaign to stop marine pollution. Marine pollution made further international headlines after the 1967 crash of the oil tanker Torrey Canyon and after the 1969 Santa Barbara oil spill off the coast of California.

Marine pollution was a major area of discussion during the 1972 United Nations Conference on the Human Environment, held in Stockholm. That year also saw the signing of the Convention on the Prevention of Marine Pollution by Dumping of Wastes and Other Matter, sometimes called the London Convention. The London Convention did not ban marine pollution, but it established black and gray lists for substances to be banned (black) or regulated by national authorities (gray). Cyanide and high-level radioactive waste, for example, were put on the blacklist. The London Convention applied only to waste dumped from ships, and thus did nothing to regulate waste discharged as liquids from pipelines.

There are various ways in which pollution enters the ocean. Some of them are:

The release of other chemical nutrients into the ocean’s ecosystem leads to reductions in oxygen levels, the decay of plant life, a severe decline in the quality of the seawater itself. As a result, all levels of oceanic life, plants, and animals, are highly affected.

Oil – Oil pollution can come from tankers that have accidents, or from boats that are dry-docked and emptied. But surprisingly, over 35% of oil pollution in the ocean comes from oil in the cities and industry runoff, even the sort we see on driveways and roads. This oil is washed away by rain into the sewage system, which leads to rivers and eventually the ocean.

Toxic Chemicals From Industries – Industrial and agricultural waste is another most common form of wastes that are directly discharged into the oceans, resulting in ocean pollution. The dumping of toxic liquids in the ocean directly affects marine life as they are considered hazardous and secondly, they raise the temperature of the ocean, known as thermal pollution, as the temperature of these liquids is quite high. Animals and plants that cannot survive at higher temperatures eventually perish.

Land Runoff – Land runoff is another source of pollution in the ocean. This occurs when water infiltrates the soil to its maximum extent and the excess water from rain, flooding or melting flows over the land and into the ocean.

Often, this water picks up man-made, harmful contaminants that pollute the ocean, including fertilizers, petroleum, pesticides, and other forms of soil contaminants. Fertilizers and waste from land animals and humans can be a huge detriment to the ocean by creating dead zones.

Ship pollution – Ship pollution is a huge source of ocean pollution, the most devastating effect of which is oil spills. Crude oil lasts for years in the sea and is extremely toxic to marine life, often suffocating marine animals to death once it entraps them. Crude oil is also extremely difficult to clean up, unfortunately meaning that when it is split; it is usually there to stay.

In addition, many ships lose thousands of crates each year due to storms, emergencies, and accidents. This causes noise pollution (excessive, unexpected noise that interrupts the balance of life, most often caused by modes of transportation), excessive algae, and ballast water. Often times, other species can also invade an ecosystem and do harm to it by interrupting the life cycles of other organisms, causing a clash of nature that has already been damaged by the overflow of pollution.

Ocean Mining – Ocean mining in the deep sea is yet another source of ocean pollution. Ocean mining sites drilling for silver, gold, copper, cobalt, and zinc create sulfide deposits up to three and a half thousand meters down into the ocean.

While we have yet the gathering of scientific evidence to fully explain the harsh environmental impacts of deep-sea mining, we do have a general idea that deep-sea mining causes damage to the lowest levels of the ocean and increases the toxicity of the region. This permanent damage dealt also causes leaking, corrosion, and oil spills that only drastically further hinder the ecosystem of the region.

Marine trash encompasses all manufactured products most of the plastic that ends up in the ocean. Littering, storm winds, and poor waste management all contribute to the accumulation of this debris, 80 percent of which comes from sources on land. Common types of marine debris include various plastic items like shopping bags and beverage bottles, along with cigarette butts, bottle caps, food wrappers, and fishing gear. Plastic waste is particularly problematic as a pollutant because it is so long-lasting. Plastic items can take hundreds of years to decompose.

Animals can become snagged on the plastic or mistake it for food, slowly killing them over a long period of time. Animals who are most often the victims of plastic debris include turtles, dolphins, fish, sharks, crabs, sea birds, and crocodiles.

In addition, the temperature of the ocean is highly affected by carbon dioxide and climate changes, which impacts primarily the ecosystems and fish communities that live in the ocean. In particular, the rising levels of Co2 acidify the ocean in the form of acid rain.

Even though the ocean can absorb carbon dioxide that originates from the atmosphere, the carbon dioxide levels are steadily increasing and the ocean’s absorbing mechanisms, due to the rising of the ocean’s temperatures, are unable to keep up with the pace.

Some devastating effects of Ocean Pollution:

In order to protect the ocean from marine pollution, policies have been developed internationally. There are different ways for the ocean to get polluted, therefore there have been multiple laws, policies, and treaties put into place throughout history.