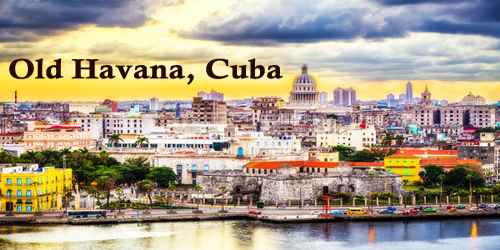 Old Havana (Spanish: La Habana Vieja) city, capital, major port, and leading commercial centre of Cuba. It also constitutes one of Cuba’s 15 provinces: Ciudad de la Habana (City of Havana). It has the second highest population density in the city and contains the core of the original city of Havana. The positions of the original Havana city walls are the modern boundaries of Old Havana. Old Havana is a UNESCO World Heritage Site. 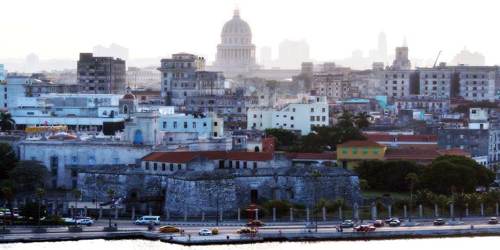 A port called San Cristóbal de la Habana was founded in 1515 by the Spanish conquistador Diego Velázquez de Cuéllar, possibly near the present town of Batabanó on the south coast of the island. It was not a fortuitous choice, for the climate was poor and the region was swampy. Mosquitoes abounded. The site was abandoned in favor of Havana’s present location (then called Puerto Carenas) on the north coast in 1519.

By the 17th century, it had become one of the Caribbean’s main centers for ship-building. Although it is today a sprawling metropolis of 2 million inhabitants, its old centre retains an interesting mix of Baroque and neoclassical monuments, and a homogeneous ensemble of private houses with arcades, balconies, wrought-iron gates and internal courtyards. Many buildings have fallen into ruin in the latter half of the 20th century, but a number are being restored. The narrow streets of Old Havana contain many buildings, accounting for perhaps as many as one-third of the approximately 3,000 buildings found in Old Havana. It is the ancient city formed from the port, the official center and the Plaza de Armas.

In 1555, Old Havana was destroyed and burned by the French corsair Jacques de Sores. The pirate had taken Havana easily, plundering the city and burning much of it to the ground. After limiting the scarce defenders, De Sores left without obtaining the enormous wealth that he was hoping to find in Havana. The city remained devastated and set on fire. Since the incident, the Spanish brought soldiers and started building fortresses and walls to protect the city. Castillo de la Real Fuerza was the first fortress built; initiated in 1558, the construction was overseen by the engineer Bartolomé Sanchez.

Old Havana resembles Cadiz and Tenerife. Alejo Carpentier called it “de las columnas”(of the columns), but it could also be named for the gateways, the revoco, the deterioration and the rescue, the intimacy, the shade, the cool, the courtyards… In her there are all the big ancient monuments, the forts, the convents and churches, the palaces, the alleys, the arcade, the human density. The Cuban State has undertaken enormous efforts to preserve and to restore Old Havana through the efforts of the Office of the Historian of the City, directed by Eusebio Leal.

Within the boundaries of Old Havana and its Fortifications are located all the elements necessary to express its Outstanding Universal Value, including Old Havana’s urban layout with its five large plazas and its harmonious ensemble of architectural monuments and traditional-style popular buildings from different periods in its history, and its extensive network of fortifications. Because of the historic role played by building ordinances during the 19th and 20th centuries, Old Havana’s urban and architectural morphology has remained virtually unchanged. The city’s 214-ha. Historic centre and its fortifications are of sufficient size to adequately ensure the complete representation of the features and processes that convey the property’s significance. Old Havana and its Fortifications does not suffer from adverse effects of development, though much of Old Havana’s built fabric is in disrepair due to decay, chronic neglect, and the natural elements.

Old Havana and its Fortifications have a high degree of authenticity in terms of location and setting, forms and designs, and materials and substances. Between the 1950s and the 1970s, certain architectural interventions and changes in use affected Old Havana’s authenticity, but without reducing a clear understanding of the veracity of the ensemble and its attributes.

In 2008, Hurricane Ike destroyed many structures in Old Havana, overturning years of conservation work directed at the iconic antiquated buildings of the area. Not only did it damage historic buildings, but it forced many of Old Havana’s residents to flee for safety. The threats that hurricanes pose adds to an already tenuous state for Old Havana’s many historic buildings. Age, decay, and neglect combine with natural factors in a complex set of threats to the long-term preservation of this historic old town.

Building ordinances in the 19th and 20th centuries have preserved the integrity of the architectural hub: Wrought-iron gates, internal courtyards, and balconies adorn the cobblestone plazas. Highlights include a visit to the Castillo de la Real Fuerza, one of the oldest existing forts in the Americas. The 18th-century Catedral de San Cristóbal de la Habana is a must-see on the plaza by the same name. Tucked around the corner is the Taller Experimental de Gráfica, an experimental art studio where you can watch artists at work.

In 1982, La Habana Vieja was inscribed in the UNESCO World Heritage List. A safeguarding campaign was launched a year later to restore the authentic character of the buildings.

Havana boasts a tropical climate, and like the rest of the Caribbean, has a hurricane risk between June and November. November to March is typically drier, though prices peak during holiday travel. Some hotels offer fewer facilities during its low season May, June, and September, and visitors can expect daily downpours in the summer months. But don’t let an afternoon deluge dampen their plans pop into one of Plaza Vieja’s many cafés (there’s even a microbrewery) and cool down with a fresh mojito as visitors soak in the spectacular city.