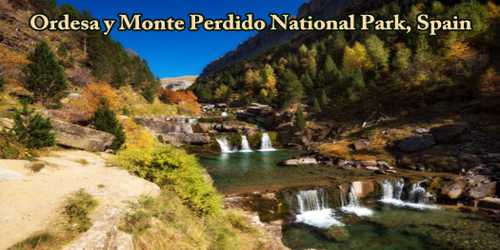 Ordesa y Monte Perdido National Park (Parque nacional de Ordesa y Monte Perdido) is located right in the middle along the border of Spain and France. It covers an area of 96 square miles (sq km 156) and is one of the protected areas for the Pyrenees. Pyrenees National Park is the protected area on the France side of the border. The national park was the first established in Spain and one of the earlier parks from around the world.

Ordesa y Monte Perdido National Park is an IUCN Category II National Park situated in the Pyrenees. There has been a National Park in the Ordesa Valley since 1918. Its protected area was enlarged in 1982 to cover the whole region amounting to 156.08 km².

It has been included since 1997 by UNESCO in the Biosphere Reserve of Ordesa-Viñamala. In the same year, it was included in the cross-border Pyrénées Mont Perdu World Heritage Site. 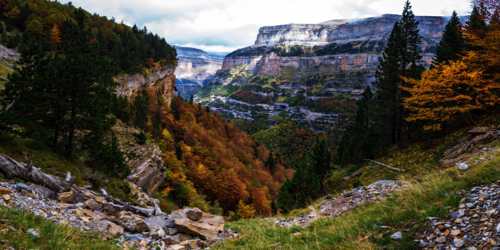 With its glacial lakes, waterfalls, wildlife, and distinctive massifs, it’s little wonder that it was one of Europe’s earliest national parks. The park centers around the towering massif of Monte Perdido at 3,355m, but there are hiking trails that run throughout the mountains to spots like Cola de Caballo Waterfall. A true highlight of visiting Ordesa y Monte Perdido is the chance to see the staggering beauty of the Rio Arazas river flowing through the Ordesa Valley.

At elevations up to 1,500-1,700 meters, there are extensive forests of beeches (Fagus sylvatica), Abies alba, pines (Pinus sylvestris), oaks (Quercus subpyrenaica), and a lesser extent of birches (Betula pendula), ashes (Fraxinus excelsior), willows (Salix angustifolia). At higher elevations up to 2,000 m, the mountain pine (Pinus uncinata) dominates. Up to 1,800 m, bushes of boxwood (Buxus sempervirens) are found. In the high meadows from 1,700 to 3,000 meters, there are numerous endemisms including Borderea pyrenaica, Campanula cochleariifolia, Ramonda myconi, Silene borderei, Androsace cylindrica, Pinguicula longifolia, Petrocoptis crassifolia, etc. The Edelweiss (Leontopodium alpinum), is one of the symbols of the National Park.

The mountain range features glacial lakes, river ravines, cascading waterfalls, and an abundance of flora and fauna to captivate the senses. It is both a UNESCO World Heritage Site and a biosphere reserve.

Wildlife of Ordesa and Monte Perdido National Park include brown bear, boar, red squirrel, marmot, red fox, badger, groundhog, weasel, and the goat-antelope known as the chamois. The most important species of the Park was the bucardo or Pyrenean ibex which unfortunately went extinct in January 2000 in spite of preservation efforts. The Pyrenean chamois is a type of goat antelope. The skies feature the Egyptian vulture, the bearded vulture and the majestic golden eagle. The golden eagle is known to carry off prey larger than itself; it is a magnificent predator.

Many illustrious persons have been fond of the places in this region and have extolled their virtues. Luciano Briet, Soler i Santaló, and Lucas Mallada helped promote the reputation of the region and obtain protected status for it.

An area of 21 square kilometers containing the Ordesa Valley was declared a National Park on 16th August 1918 by a Royal Decree. On 13th July 1982, it was enlarged to its current 156.08 km2 and its official name was changed to Parque nacional de Ordesa y Monte Perdido. 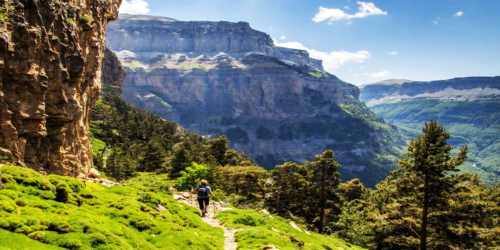 Ordesa and Monte Perdido National Park is pristine region of the Pyrenees, protected by Spain because of both beauty and natural resources. The best way to experience this amazing wonder of nature is by hiking and trekking through the forests and valleys. The more adventurous can embark on the full day trail along the river gorge. This provides the trekker with views of several waterfalls. The park is filled with varying hiking trails that differ in both length and difficulty making it easy for everyone to explore some aspect of the park.