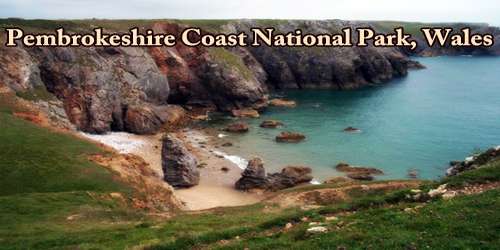 Pembrokeshire Coast National Park (Welsh: Parc Cenedlaethol Arfordir Penfro) is home to some of the world’s best beaches, Britain’s smallest city and some of Wales’ top tourist attractions. It is also a national park along the Pembrokeshire coast in west Wales.

It was established as a National Park in 1952 and is the only one in the United Kingdom to have been designated primarily because of its spectacular coastline. It is one of three National Parks in Wales, the others being the Brecon Beacons (Bannau Brycheiniog) and Snowdonia (Eryri). It also boasts some of the most spectacular scenery and diverse wildlife in Britain including internationally important nature reserves, geology, and archaeology.

Landmarks to see here include the enchanting Strumble Lighthouse, the scenic Blue Lagoon, and the beach at Barafundle Bay. Perhaps the ultimate way to see this national park though is to take the Pembrokeshire coast path which goes for 186 miles right around this section of the Wales seaside.

The UK’s only truly coastal National Park also has one of the world’s top hiking routes, the Pembrokeshire Coast Path National Trail, which takes in more than 50 beautiful beaches as twists and turns its way through 186 miles of the most breath-taking coastal scenery in Britain. From St Dogmaels in the north to Amroth in the south, the trail covers almost every kind of maritime landscape from rugged cliff tops and sheltered coves to wide-open beaches and winding waterways. 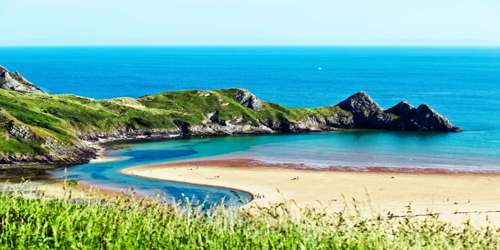 The National Park has a varied landscape of rugged cliffs, sandy beaches, wooded estuaries, wild inland hills, the moorland of the Preseli Hills, and the wooded Gwaun valley. The total area is 629 km2 (243 sq mi). There are four distinct sections: clockwise these are the south Pembrokeshire coast, including Caldey Island; the Daugleddau estuary; the St Bride’s Bay coast, including the coastal islands; and the Preseli Hills.

A walk in any of these spots is a treat for the mind, body, and soul and Pembrokeshire’s weather can be spectacular all-year-round, with the quality of light revered as extra special by artists.

The geology of the area is of particular interest with many good exposures both inland and along the coast, exhibiting a variety of rock types and structural features such as natural arches, stacks, rock folding, and sea caves. A stack of note is Stack Rocks (Creigiau Elegug), two large detached pillars of limestone which in the spring provide valued nesting sites for razorbills and guillemots. In the north, the rocks of Carn Llidi, Pen Beri, and Garn Fawr, together with the extensive moorland on Mynydd Carningli and Mynydd Preseli, give an exposed and mountainous feel to the landscape, cut through by the wooded valleys of the Gwaun and Nevern. In the west, the National Park is dominated by the broad sweep of St Bride’s Bay, bounded at its northern end by Ramsey Island, near St David’s peninsula, and at its southern end by Skomer. The southern coast is another contrast, with the limestone plateau and cliffs of the Castlemartin peninsula, the steep-sided wooded valleys inland from Amroth; the Bosherston lakes  now, like much of the coastal strip, in the care of the National Trust  and the tourist resorts of Tenby and Saundersfoot. Between the western and southern areas of the National Park lies the Milford Haven waterway, where the tranquil Daugleddau estuary feeds into one of the finest natural deep water harbors in the world.

The flora and fauna of Pembrokeshire –

In spring, visitors can explore woodlands carpeted with bluebells or meadows bursting with samphire, cowslips, harebells, and campions. In summer, butterflies dance through arches of honeysuckle and over clouds of thrift and gorse.

And if come autumn or winter, visitors feel like an outdoorsy break, the coast is the perfect place to blow the cobwebs away. They will find plenty of pubs and other cozy retreats within range when they are ready to rest up and thaw out.

The national park is fantastic for wildlife-watching, too. From the first little bursts of warm weather in spring, the clifftops are alive with crickets and ladybirds. Overhead, seabirds wheel, screech, and soar. Every year, puffins and Manx Shearwaters return to the islands of Caldey, Grassholm, Skokholm, Skomer and Ramsey to nest, while rabbits graze companionably and seals snooze in the sun. And occasionally, half-hidden by the waves, a pod of dolphins will come frolicking by. 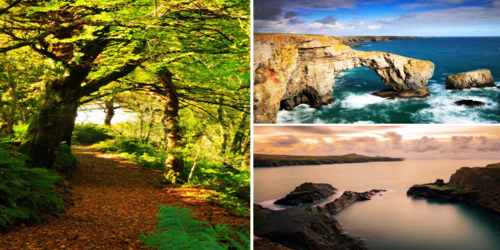 The National Park includes many sites (such as Pentre Ifan) of historic and archaeological importance and areas which are of national or international nature conservation significance in their own right, including 7 Special Areas of Conservation, a Marine Nature Reserve, 6 national nature reserves and 75 Sites of Special Scientific Interest.

In January 2016 the Authority launched the “Changing Coasts” project to document the way the coastline has changed as a result of recent winter storms; the project invites visitors to submit photographs taken (at any time of day) from fixed points; a pilot study will be carried out at Abereiddy.

The Daugleddau Estuary, known to locals as the “secret waterway,” has its upper reaches within the park itself. The estuary’s banks are lined with ruined Norman castles and ancient coal mines.

The park has 621 miles (1,000 kilometers) of trails, including one-hour strolls and 186 miles (299 kilometers) of the Pembrokeshire Coast National Trail. Year-round Coastal Bus Services, designed for walkers, cover the entire route so that strollers can set their own itineraries.

The Park is managed by Pembrokeshire Coast National Park Authority, which has around 130 staff and a committee of 18 members. The Authority’s purposes are to conserve the National Park, encourage the public to enjoy and understand it. In pursuing these purposes, the authority should seek to foster the social and economic well-being of the communities within its boundaries. Its offices are in Pembroke Dock.