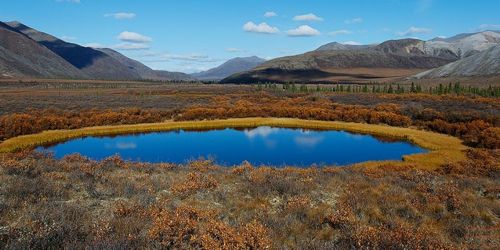 Permafrost and its Effects

Permafrost is a thick subsurface layer of soil that remains frozen throughout the year, occurring chiefly in Polar Regions. It is defined as ground (soil or rock and included ice or organic material) that remains at or below 0°C for at least two consecutive years. Lowland permafrost regions are traditionally divided into several zones based on estimated geographic continuity in the landscape. Thermokarst lakes dominate large areas of the Arctic land surface and may expand as permafrost continues to warm and thaw. We will explore a new frontier in polar science: the relation of thermokarst lakes to global climate change.

Most permafrost can be differentiated into two broad zones; the continuous and the discontinuous, referring to the lateral continuity of permafrost. In the continuous zone of the far north, permafrost is nearly everywhere present except under the lakes and rivers that do not freeze to the bottom. Heat from a building or other constructed article will cause thawing, and can result in sinking. For construction outside the permafrost regions it is usually believed that all the load from a structure is transmitted through the base of the foundation to bearing ground while ground in contact with the sides of a foundation only occasionally carries a vertical load (as with piles and deep foundations). The interaction between foundations and ground is assessed differently in the regions of deep seasonal freezing and of permafrost.

Additionally, sinking can be prevented by using stilts that extend to a depth of over 15 meters.

Above-ground pipeline: Problems from melting are avoided in thaw-unstable areas by placing the pipeline on an elevated support system above ground.

Below-ground, conventional burial: In areas where thaw-stable or unfrozen ground is encountered, the pipeline can be buried with no special provisions.

Below-ground, special burial: Where thaw-unstable permafrost is encountered, but the pipeline must be buried for highways, animal crossings, rockslides/avalanches, etc.

The pipeline is insulated so that the heat it produces does not promote melting.

Permafrost is sensitive to climate changes and human activities mainly through changes in active layer thickness and permafrost temperatures. Melting of ground ice near the permafrost table produces uneven thaw settlement and thermokarst, producing great threat to infrastructure and engineering constructions over permafrost