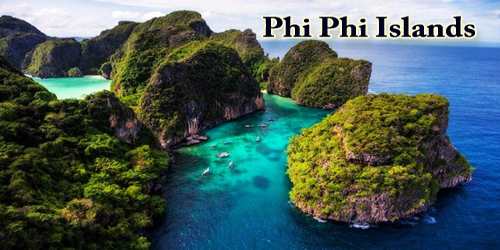 The Phi Phi Islands (Thai: หมู่เกาะพีพี, (pronounced ‘Pee Pee’) are an island group in Thailand, between the large island of Phuket and the Straits of Malacca coast of Thailand. Phi Phi is a group of six islands. The two main islands are Phi Phi Don and Phi Phi Leh. The larger and inhabited Phi Phi Don attracts hundreds of visitors to stay on its lovely shores while the smaller uninhabited Phi Phi Leh hosts stunningly beautiful bays and beaches, including the world-famous Maya Bay, which was the set where The Beach (with Leonardo Di Caprio) was filmed.

More than one thousand tourists arrive on Phi Phi daily. This figure does not include those who arrive by chartered speedboat or yacht. Phi Phi produces about 25 tonnes (28 short tons) of solid waste a day, rising to 40 tonnes (44 short tons) during the high season and most of this waste leave Phi Phi island into the ocean untreated; in fact, Phi Phi Island releases 83% wastewater untreated. All tourists arriving on the island pay a 20-baht fee at Ton Sai Pier to assist in “keeping Ko Phi Phi clean.”

The islands of the Phi Phi archipelago are located in southern Thailand about 7 degrees north of the equator, which is why they have a hot and humid tropical climate at monsoon. The climate of Phi Phi Island has a rainy season that begins in May and lasts until October. In these months the rains are very intense and there are averages of about 20 rainy days a month. 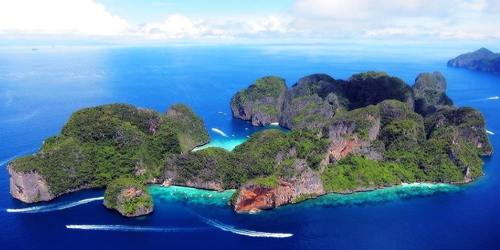 Between December and March, the rains decrease drastically, on average it rains for 3 days a month. In this period there is the dry season, which is the best time for a trip to the islands. Over 2,200 mm of rainfall annually. September is the rainiest month; January and February are the driest months. The temperatures remain constant throughout the year.

The islands came to worldwide prominence when Ko Phi Phi Le was used as a location for the 2000 British-American film The Beach. This attracted criticism, with claims that the film company had damaged the island’s environment, as the producers bulldozed beach areas and planted palm trees to make it more resemble descriptions in the book, an accusation the film’s makers contest. An increase in tourism was attributed to the film’s release, which resulted in increased environmental degradation. Phi Phi Le is home to the “Viking Cave”, where there is a thriving industry harvesting edible bird’s nests.

Slammed by the tsunami in 2004, Ko Phi Phi has now recovered. Its natural beauty still recalls the tropical island dream evoked in the famous Leonardo DiCaprio movie, The Beach, which was filmed here at Maya Beach on the smaller neighboring island of Ko Phi Phi Leh. Ko Phi Phi Don is the only inhabited island and offers day trips to the surrounding islands. Other popular activities include swimming, snorkeling, and superb diving. Don’t miss Monkey Beach, famous for its cheeky namesake residents.

From archaeological discoveries, it is believed that the area was one of the oldest communities in Thailand, dating back to the prehistoric period. It is believed that this province may have taken its name from Krabi, which means ‘sword’. This may come from a legend that an ancient sword was unearthed prior to the city’s founding.

The name Phi Phi (pronounced “phi-phi”) originates from Malay. The original name for the islands was Pulau Api-Api (‘the fiery isle’). The name refers to the Pokok Api-Api, or “fiery tree” (grey mangrove) which is found on the islands. 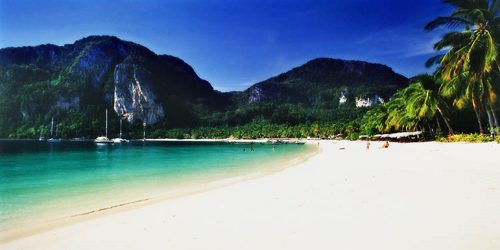 There are six islands in the group known as Phi Phi. They lie 40 kilometers (25 miles) southeast of Phuket and are part of Hat Nopparat Thara-Ko Phi Phi National Park. The national park covers an area of 242,437 rai (38,790 ha). which is home to an abundance of corals and marine life. There are limestone mountains with cliffs, caves, and long white sandy beaches. Phi Phi Don and Phi Phi Le are the largest and best-known islands. Phi Phi Don is 9.73 square kilometers (3.76 square miles): 8 kilometers (5.0 miles) in length and 3.5 kilometers (2.2 miles) wide. Phi Phi Le is 2 kilometers (1.2 miles). In total, the islands occupy 12.25 square kilometers (4.73 square miles).

The islands feature beaches and clear water, and the natural environment is protected by national park status. Tourism on the islands exploded since the release of the movie The Beach. Phi Phi Le’s Maya Bay was closed to tourists from June 2018 until the ecosystem recovers, but at least a year.