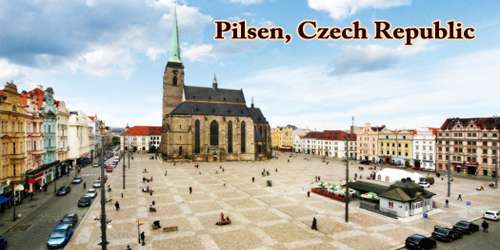 Plzeň (Czech pronunciation: (ˈpl̩zɛɲ); German and English: Pilsen, /ˈpɪlzən/) is a city in the Czech Republic, and it is the second-biggest city in Bohemia after Prague. Known as the birthplace of the Pilsner beer, Pilsen (Plzeň) is more than just a good beer. About 90 kilometers (56 miles) west of Prague in western Bohemia, it is the fourth most populous city in the Czech Republic with about 175,000 inhabitants.

Plzeň (Pilsen in German) is famed among beer-heads worldwide as the mother lode of all lagers, the fountain of eternal froth. Pilsner lager was invented here in 1842. It’s the home of Pilsner Urquell (Plzeňský prazdroj), the world’s first and arguably best lager beer ‘Urquell’ (in German; prazdroj in Czech) means ‘original source’ and beer drinkers from around the world flock to worship at the Pilsner Urquell brewery.

The New Town of Pilsen was founded at the confluence of four rivers Radbuza, Mze, Uhlava and Uslava following a decree issued by the Czech king Wenceslas II. He did so in 1295. Since the very beginning, the town became a busy trade center located at the crossroads of two important trade routes. They were linking the Czech lands with German cities Nuremburg and Regensburg. In the 14th century, Pilsen was the third-largest town after Prague and Kutna Hora. It comprised 290 houses on an area of 20 ha. Its population was 3,000 inhabitants. In the 16th century, after several fires that damaged the inner center of the town, Italian architects and builders contributed significantly to the changing character of the city. The most renowned among them was Giovanni de Statia. The Holy Roman Emperor, Czech king Rudolf II, resided in Pilsen twice between 1599-1600. It was in the time of the Estates revolt. He fell in love with the city. He even bought two houses neighboring with the town hall and had them reconstructed according to his taste. Later, in 1618, Pilsen was besieged and captured by Count Mansfeld’s army. Many Baroque style buildings dating to the end of the 17th century were designed by Jakub Auguston. Sculptures were done by Kristian Widman. The historical heart of the City almost identical with the original Gothic layout was declared protected historic city reserve in 1989.

The medieval town square forms the center of Plzeň and is dominated by St. Bartholomew’s church, with its slender steeple (335 feet (102 m)), the highest in Bohemia; the Franciscan Church of the Virgin Mary; and the Renaissance town hall (1556) and burgher houses. 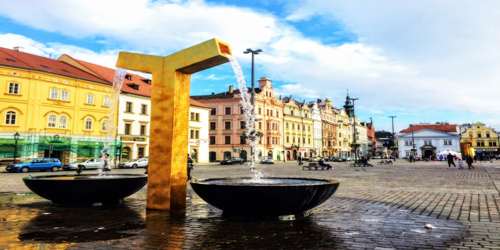 The coalfields at nearby Nýřany and local iron-ore deposits gave rise in the 19th century to Plzeň’s engineering industry, symbolized by the Škoda Works, which occupy most of the city’s western sector. Severely damaged in World War II, the factories were rebuilt and restored to production. Best known for munitions, the Škoda Works also manufacture heavy machinery, military aircraft, railway locomotives, and cars. Škoda pioneered the development of electric-railway locomotives, with plastic body panels to reduce axle loadings. Since the Middle Ages, Plzeň has been famous for its Pilsner beer; its Měšťanský pivovar (“Citizen’s Brewery”) was built in 1842. Other manufactures include chemicals, pottery, hardware, and paper. The city is the transportation hub and the economic and cultural center of western Bohemia. It is the site of the University of West Bohemia (1949; renamed 1991) and the West Bohemian Gallery and Museum.

The city of Plzen is situated in the Plzen basin on the confluence of four rivers – Mze, Radbuza, Uhlava and Uslava; the river resulting from the confluence is called Berounka. The city center is approx. 310 m above the sea level; there are several hills elevated more than 400 m above the sea level in the outskirts. The shortest distance from Plzen to the sea is less than 500 km, to the Sczecin Gulf in the Baltic Sea or to the Trieste Gulf in the Adriatic Sea. However, the city isn’t directly connected to the sea by inland ship transport.

Plzeň has a cool and temperate Oceanic climate (Cfb). Plzeň has low rainfall (604 mm (24 in) year average) evenly spread over the year. Precipitation occurs on average every second day, and the number of days with thunderstorms is 19. It receives on average 1700 hours of sunshine though winters have longer periods without sunshine. Terrain features and a relatively low altitude (290 to 390 m (950 to 1,280 ft)) give some shelter from strong winds.

Winters are chilly but milder than some adjacent areas. Snow cover is erratic and lasts on average for 51 days. Though an average year has 113 days with minimum temperature below zero, the temperature falls below −15 °C (5 °F) on 5 days. The record low temperature is around −20 °C (−4 °F). Winters are often murky with frequent long-standing haze. Spring is short, and in April to June, there is blooming vegetation. Summer lasts from the end of May until the first third of September. During that period Plzeň has changeable weather which can be warm to hot. Temperatures are always above 5 degrees Celsius with nights between 8 to 18 °C (46 to 64 °F) and days between 16 to 35 °C (61 to 95 °F). Days are up to 16 hours long.

Development of the Plzen population is closely tied to the industrial boom in the city. A considerable growth in the number of inhabitants came in the 19th century, namely between 1869 and 1890, following the expansion of Skoda Works and of other industrial enterprises. The population was increasing relatively dynamically until the end of the 19th century and then in the first third of the 20th century. After World War II, the number of inhabitants decreases due to the transfer of German population and migration of residents to the borderland.

The second half of the 20th century is at first remarkable for a rapid increase in population. New housing estates were built with a large quantity of prefabbed flats housed by people from the wide surroundings of Plzen. However, a stagnation began in 1980s and later on even a decline in the number of inhabitants which was apparently caused by the changed demographic behavior of the population in general as well as by a diminishing quantity of flats finished by sanitating and re-constructing objects in the center of the city. By the end of 2003, Plzen-city had a population of ca. 164 000 inhabitants. 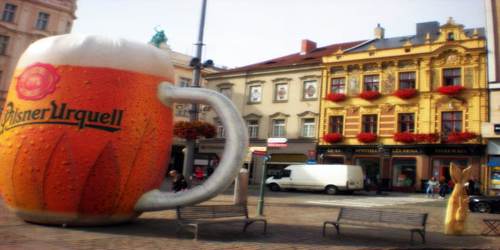 In 1375 Bohemian king Charles IV endowed the Dobrow Monastery near Plzeň with the beer right, and it is one of the oldest breweries to survive to modern times.

The officials of Plzeň founded a city-owned brewery in 1839, Bürger Brauerei (Citizens’ Brewery, now Plzeňský Prazdroj), and recruited Bavarian brewer Josef Groll (1813–1887) who produced the first batch of modern Pilsner beer on 5th October 1842. The combination of pale color from the new malts, Pilsen’s remarkably soft water, Saaz noble hops from nearby Žatec (Saaz in German), and Bavarian-style lagering produced a clear, golden beer which was regarded as a sensation. Improving transport meant that this new beer was soon available throughout Central Europe and Pilsner Brauart-style brewing was widely imitated.

In 1859, “Pilsner Bier” was registered as a brand name at the Chamber of Commerce and Trade in Plzeň. In 1898, the Pilsner Urquell trade mark was created to put emphasis on it being the original brewery.

Pilsen is a center of international cultural events and festivals that include the Smetana Days, the Theatre Festival, International Drawing Biennial, Skupa’s Plzen, and the International Big-Band Festival. The Pilsen Cultural Summer offers various open-air-stage concerts in the city center. 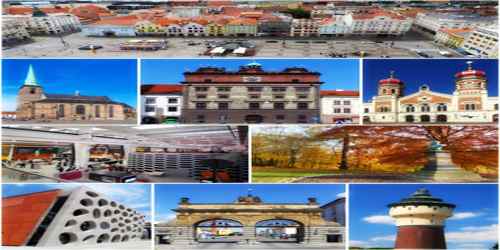 The most prominent sights of Plzeň are the Gothic St. Bartholomew’s Cathedral, founded in the late 13th century, whose tower, at 102 meters (335 feet), is the highest in the Czech Republic, the Renaissance Town Hall, and the Moorish Revival Great Synagogue, the second largest synagogue in Europe, after the Dohány Street Synagogue in Budapest. There is also a 20 km (12 mi) historic tunnel and cellar network, among the longest in Central Europe. Part of this network is open to the public for tours of about 750 metres (2,500 feet) in length and down to a depth of 12 m (39 ft).

Built-in 1532, the former water tower was integrated into the city’s fortification system at Prague Gate. Another storey was added in 1822 in the French Imperial style. The Gothic portal (dating from the 1500s) was added in 1912, coming from another house that had been demolished. Above the portal, there is a commemorative plaque dedicated to Dr. Josef Skoda (a professor at the Vienna University), who was born next door on 10 December 1805.

Plzeň is also well known for the Pilsner Urquell (since 1842) and Gambrinus (since 1869) breweries, currently owned by Asahi Group Holdings. A popular tourist attraction is the Plzeňský Prazdroj brewery tour where visitors can discover the history of beer. The pilsener style of beer was developed in Plzeň in the 19th century.

Pilsen was the European Capital of Culture in 2015. Due to obtaining this prestigious title, several new cultural places had a chance to be established, for example, New Theatre and the creative zone DEPO2015 are among them. During the year, mainly in the season, dozens of events take place in public spaces. You may choose from the rich program of traditional events.

Pilsen offers entertainment for the whole family. The wide choice of attractive places intended for children cannot be explored during one day. An all-day program is offered by Pilsen ZOO with the adjacent DinoPark. A fine afternoon in any weather may be spent in the Techmania Science Centre, or in the Muzeum of Marionettes and Ghosts. The labyrinth of medieval corridors of Pilsen Historical Underground will provide visitors with interesting experiences.