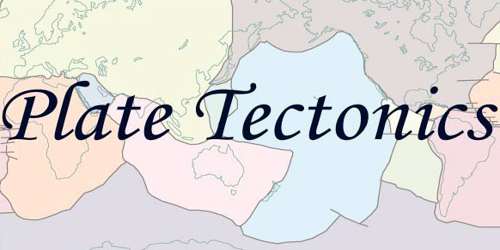 Plate tectonics is a theory that the Earth’s lithosphere (the crust and upper mantle) is divided into a number of large, platelike sections that move as distinct masses. The movement of the plates is believed to result from the presence of large convection cells in the Earth’s mantle which allows the rigid plates to move over the relatively plastic asthenosphere. The geoscientific community accepted plate-tectonic theory after seafloor spreading was validated in the late 1950s and early 1960s. By definition the word “plate” in geologic terms means a large slab of solid rock. “Tectonics” is a part of the Greek root for “to build” and together the terms define how the Earth’s surface is built up of moving plates. The theory of plate tectonics itself says that the Earth’s lithosphere is made up individual plates that are broken down into over a dozen large and small pieces of solid rock.

Tectonic plates are composed of oceanic lithosphere and thicker continental lithosphere, each topped by its own kind of crust. Along convergent boundaries, subduction, or one plate moving under another, carries the lower one down into the mantle; the material lost is roughly balanced by the formation of new (oceanic) crust along divergent margins by seafloor spreading.

The concept of plate tectonics was formulated in the 1960s. According to the theory, Earth has a rigid outer layer, known as the lithosphere, which is typically about 100 km (60 miles) thick and overlies a plastic layer called the asthenosphere. The lithosphere is broken up into about a dozen large plates and several small ones. These plates move relative to each other, typically at rates of 5 to 10 cm (2 to 4 inches) per year, and interact along their boundaries, where they converge, diverge, or slip past one another. “Before plate tectonics, people had to come up with explanations of the geologic features in their region that were unique to that particular region,” Van der Elst said. “Plate tectonics unified all these descriptions and said that you should be able to describe all geologic features as though driven by the relative motion of these tectonic plates.”

There are seven major tectonic plates (North America, South America, Eurasia, Africa, Indo-Australian, Pacific and Antarctica) as well as many smaller, microplates such as the Juan de Fuca plate near the United States’ state of Washington (map of plates).

The key principle of plate tectonics is that the lithosphere exists as separate and distinct tectonic plates, which ride on the fluid-like (visco-elastic solid) asthenosphere. Plate motions range up to a typical 10–40 mm/year (Mid-Atlantic Ridge; about as fast as fingernails grow), to about 160 mm/year (Nazca Plate; about as fast as hair grows). Subduction zones, or convergent margins, are one of the three types of plate boundaries. The others are divergent and transform margins.

They are associated with different types of surface phenomena.

Plate boundary zones occur where the effects of the interactions are unclear, and the boundaries, usually occurring along a broad belt, are not well defined and may show various types of movements in different episodes.

Convergent boundaries (Destructive) (or active margins) occur where two plates slide toward each other to form either a subduction zone (one plate moving underneath the other) or a continental collision.