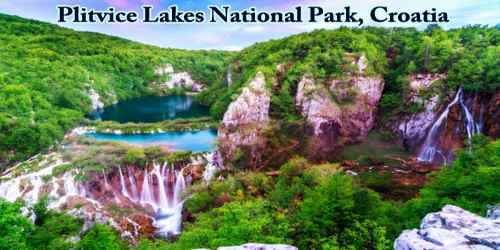 Plitvice Lakes National Park (Croatian: Nacionalni park Plitvička jezera, colloquially Plitvice, pronounced (plîtʋitse)) is one of the most unique places to visit in Croatia. It is one of the oldest and largest national parks in Croatia. The Parks contains 16 interconnecting lakes that vary in color from emerald green to turquoise to deep blue, depending on mineral content and lighting conditions. In 1979, Plitvice Lakes National Park was added to the UNESCO World Heritage Site.

With easy walking trails, boardwalks suspended over the turquoise water, stunning viewpoints, and photogenic waterfalls, this is the type of place that is perfect for visitors of all ages. The national park was founded in 1949 and is in the mountainous karst area of central Croatia, at the border to Bosnia and Herzegovina. The important north-south road that passes through the national park area connects the Croatian inland with the Adriatic coastal region. The protected area extends over 296.85 square kilometers (73,350 acres). About 90% of this area is part of Lika-Senj County, while the remaining 10% is part of Karlovac County.

Each year, more than 1 million visitors are recorded. Entrance is subject to variable charges, up to 250 kunas or around €34 per adult per day in summer 2018. 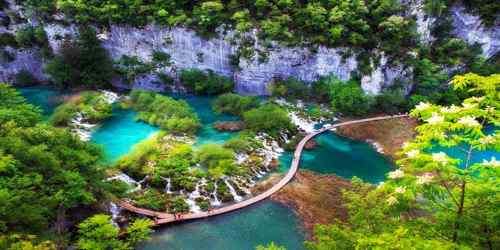 Found mostly in Lika-Senj County in central Croatia, the national park lies in one of the country’s mountainous regions near the Dinaric Alps. As a national park, Plitvice Lakes was founded in 1949, making it not only one of Croatia’s largest but also oldest national parks. The national park is world-famous for its lakes arranged in cascades. Sixteen lakes can be seen from the surface. These lakes are a result of the confluence of several small rivers and subterranean karst rivers. The lakes are all interconnected and follow the water flow. They are separated by natural dams of travertine, which is deposited by the action of moss, algae, and bacteria. The particularly sensitive travertine barriers are the result of an interplay between water, air, and plants. The encrusted plants and bacteria accumulate on top of each other, forming travertine barriers which grow at the rate of about 1 cm (0.4 in) per year.

The 16 lakes are separated into an upper and lower cluster formed by runoff from the mountains, descending from an altitude of 636 to 503 m (2,087 to 1,650 ft) over a distance of some 8 kilometers (5.0 mi), aligned in a south-north direction. The lakes collectively cover an area of about 0.77 square miles, the water exiting from the lowest lake forming the Korana River. The lakes are renowned for their distinctive colors, ranging from azure to green, grey or blue. The colors change constantly depending on the quantity of minerals or organisms in the water and the angle of sunlight.

To enter the national park, there are two entrances found along the D1 national highway. This is the main inland road that runs north to south through Croatia, making it a common route for those avoiding the coast.

Plitvice Lakes National Park covers over 73,000 acres. There are four hiking trails that are organized into 7 different routes to tour the park. It’s easiest to think about the park in three different sections. The lower lakes section includes Entrance 1 and Veliki Slap (the Big Waterfall). From here, visitors can take a boat or the shuttle to the section of the upper lake, with some of the prettiest boardwalk trails and waterfalls in the park. Beyond this is the third section, a trail around Proscansko Lake.

There is another section to the park that is not included on the main routes. There is a road and trail that runs along the western cliffs of the park, offering very nice aerial views over the lakes and boardwalk trails.

The Plitvice Lakes have formed in a depression between the Mala Kapela mountain in the west and the Plješevica mountain in the east amidst the Dinaric Alps. The national park is located at the national route D1 Zagreb–Split between Slunj and Korenica in the vicinity of Bosnia and Herzegovina. Other larger municipalities within the surrounding area are Ogulin, Rakovica, Otočac, Gospić, and Bihać in Bosnia.

The shortest linear distance between the Adriatic coast and the national park is 55 km (34 mi). By road from the coastal town of Senj the distance is about 110 km (68 mi). After traversing the Velebit mountain range travelers reach the Croatian karst plains of Lika. These plains are characterized by many karst poljes (e.g. the Gacko polje).

The fastest north-south road connection within Croatia, the A1 Zagreb–Split runs about 50 km (31 mi) west of the national park and thus circumvents the protected area. Plitvice Lakes National Park can be reached from Karlovac exit in the north, from Otočac exit in the west or Gornja Ploča exit in the south.

The 16 lakes that can be seen from the surface are grouped into the 12 Upper Lakes (Gornja jezera) and the four Lower Lakes (Donja jezera). 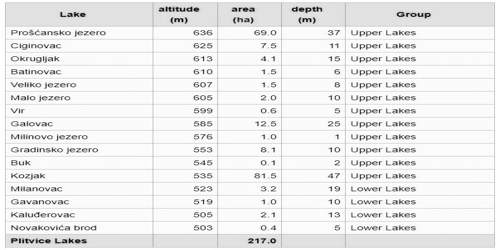 The highest waterfalls are the Large Waterfall (kroat. Veliki slap) at the end of the Lower Lakes, over which the Plitvica river falls, and Galovački buk at the Upper Lakes. 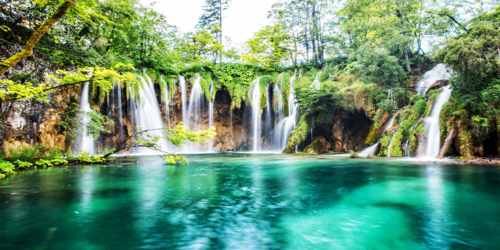 As with most of Croatia, summer is peak season for Plitvice thanks to the great weather. With day trips possible from the bustling coast, the park can get extremely busy come summer. That isn’t to say visitors should avoid summer, only that they should be aware of the crowds that may greet them. Alternatively, a better approach may be to visit during late spring or autumn. Not only will the crowds be lighter and weather generally good, but visitors will get to see the park at its most colorful. Whether a vibrant green or speckled with yellows, reds, and oranges, Plitvice makes any color scheme look good.

It’s when it comes to visiting Plitvice Lakes in winter that things can get tricky. Thanks to their elevation, the national park can get quite cold in winter so much so that the waterfalls are known to freeze over. Seeing the lakes frozen and surrounded by snow can be a magical sight, but park access also becomes limited due to these conditions. During winter, only the lower lakes are open to visitors, with walking trails and ferry access to the Upper Lakes closed.

On average, the annual precipitation rate at the Plitvice Lakes is 1,500 mm (59.06 in). Usually, in spring and fall (autumn) the largest rain quantities are measured. The average relative air humidity is 81.8 percent. In January, the average temperature is 2.2 °C (36 °F). During the summer months of July and August, the temperature rises to 17.4 °C (63 °F). The general average annual temperature is 7.9 °C (46 °F). Snow falls from November until March. Usually, the lakes are frozen during December and January.

Accommodation in the Plitvice Lakes –

It is possible to stay right next to the Park at one of its three hotels (which are all clustered quite closely together by Entrance 2) or at its campsite, Camp Korana (which contains bungalows or space for 500 camping units), which is about 7km from entrance 1. Another campsite, Camp Borje, is 15km away from Entrance 2. Another hotel, the Hotel Grabovac, that is also located 12km north of the Park.

There is also a very wide selection of private accommodation (rooms, apartments in guesthouses and similar) in the region. These include some options very close to the park entrances, but also plenty of choice in a number of the towns and villages (such as Slunj) on the way to the Park. If visitors don’t have their own car, make sure they pick an accommodation choice that’s walking distance to the Park! (Or perhaps arrange transfer options with the accommodation owners.) 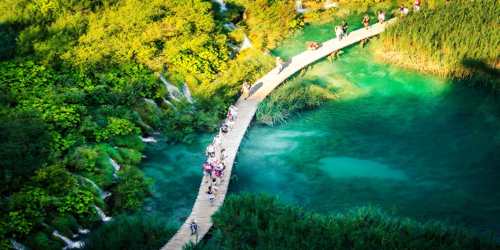 Best Things to Do in Plitvice Lakes:

This is a UNESCO site so swimming is not allowed here. However, Krka National Park is a similar experience to Plitvice and swimming is permitted here.