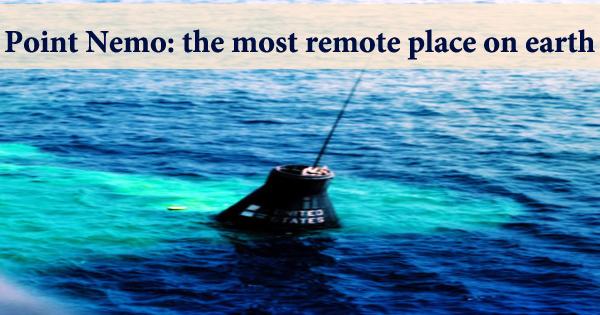 Point Nemo: the most remote place on earth

Point Nemo is officially recognized as “the oceanic pole of inaccessibility,” or, to put it another way, the farthest point in the ocean from land. The nearest land is Ducie Island, one of the Pitcairn Islands, to the north; Motu Nui, one of the Easter Islands, to the northeast; and Maher Island, part of Antarctica, to the south. This remote oceanic site is located at coordinates 48°52.6′S 123°23.6′W, about 2,688 kilometers from the nearest land. Experts had long debated how to locate the center of the ocean, but it took modern technology to provide a complete solution. The oceanic pole of inaccessibility was officially discovered in 1992 by survey engineer Hrvoje Lukatela.

There are clearly no humans anywhere near Point Nemo (the word “Nemo” is both Latin for “no one” and a reference to Jules Verne’s submarine captain from 20,000 Leagues Under The Sea). A strange noise was heard less than 1,250 miles east of Point Nemo in the 1990s. The sound, nicknamed “the Bloop,” was louder than a blue whale, prompting oceanographers to speculate that it was produced by an unseen sea monster. NOAA (National Oceanic and Atmospheric Administration) determined that the sound was caused by a massive iceberg fracturing and cracking after much speculation.

Point Nemo refers to a region of the South Pacific Ocean roughly 34 times the size of France, where marine life is thought to have barely evolved due to its remoteness and poor ocean currents, which prevent more developed, larger wildlife from surviving. There are no commercial routes to the ocean’s most remote point, and for good reason. There isn’t anything. There isn’t a beacon or an anchored marker. There are just large swaths of open water. The only thing a tourist can discover at Point Nemo is the distinction of being the most difficult place on the planet to enter.

The location is so remote that the people nearest to Nemo aren’t even on the planet. At any given time, astronauts onboard the International Space Station are approximately 258 miles (416 kilometers) from their home planet. Humans in space are far closer to the pole of inaccessibility than those on land, since the nearest populated place to Point Nemo is over 1,000 miles away. In reality, space agencies are familiar with the entire region surrounding Point Nemo. The region is currently recognized as the “South Pacific Ocean Uninhabited Area” by space agencies.

Point Nemo is well-known among space agencies, as it is used to calculate the re-entry trajectory during the “de-orbiting” period. It is the last resting place for decommissioned spacecraft. When the Russian space station Mir was decommissioned, for example, the oceanic pole of inaccessibility was chosen as the crash-landing site to ensure that the debris caused by its re-entry into the Earth’s atmosphere did not cause damage on land. As a result, a veritable spacecraft graveyard has grown up around Point Nemo over the years. NASA prefers it for the International Space Station’s final resting spot, which must be demolished or reconfigured in 2024. However, the US agency also intends to decommission the space telescopes that are currently leading space-based astronomy in this part of the Pacific.

Hrvoje Lukatela, a survey engineer, used a computer program to measure the coordinates that were the greatest distance from three equidistant land coordinates to find the point in the ocean that was farthest away from any land in 1992. It’s likely that no person has ever traveled through those coordinates. Since it is the point on the planet with the fewest human inhabitants and the quietest shipping channels, it has long been used as a dumping ground by Russian, European, and Japanese space agencies.

It’s been speculated that it’s a space junk graveyard. It’s the ideal location for dumping old rockets and satellites because no one is around. There are over 260 decommissioned spacecraft believed to be in the region. According to space archaeologist Alice Gorman of Flinders University in Adelaide, Australia, rather than single monuments to the past of space travel, the fossils are scattered across the ocean floor in fragments. Oceanographers discovered a strange noise less than 1,240 miles (2,000 kilometers) east of Point Nemo in 1997.

The mystery noise was nicknamed “The Bloop” by befuddled scientists at the National Oceanic and Atmospheric Administration, who couldn’t think of anything big enough to produce such a noisy sound underwater. Sci-fi fans, on the other hand, came up with a simple clarification. According to Gorman, “spacecraft do not survive atmospheric re-entry whole.”

“Most of them burn up in the fierce heat. Fuel tanks and pressure vehicles, which are part of the fuel system, are the most common components to survive. These are usually made of titanium alloys or stainless steel, and are often encased in high-temperature-resistant complex carbon fibers.”

Point Nemo is located near the southern end of the East Pacific Rise, a volcanically active submarine ridge that extends all the way up to the Gulf of California. It is the tectonic plate boundary between the Pacific and Nazca tectonic plates, which are slowly drifting apart. Magma rises between the plates, causing hydrothermal vents to erupt, releasing hot water and minerals. Bacteria survive in this harsh climate, getting their energy from chemicals released by the eruptions. As a result, the bacteria are able to support larger animals. Also, in the most distant corners of the globe, humanity’s unsustainable practices seem to be unavoidable.

Due to its remoteness and distance from shipping routes, the area around Nemo was chosen as a “spaceship graveyard.” Since autonomous spaceships are not designed to survive re-entry into Earth’s atmosphere (the heat usually destroys them), scientists had to choose a location with a very low risk of being hit by flying space debris. The oceanic pole of inaccessibility at Point Nemo, with a population of zero, provided the ideal solution.