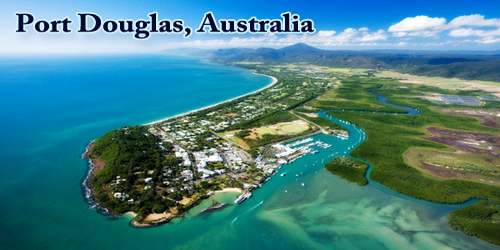 Port Douglas, Australia is a coastal town and locality in the Shire of Douglas, Queensland, approximately 70 km (40 mi) north of Cairns. It was named after John Douglas, Premier of Queensland (1877-79). Established as a port and then sugar growing area, Port Douglas fell on hard times after the 1911 cyclone. Tourism came to its rescue in the 1980s. It was surrounded by nature’s riches of two iconic World Heritage areas, the majestic ‘Great Barrier Reef’ and the ancient ‘Daintree Rainforest.’

The creation of Port Douglas came about from the need for a convenient port to tranship goods for inland gold fields at Palmer River (1873), north-west of Port Douglas, and on the Hodgkinson River southwards to Kingsborough (1876). Existing tracks to Cooktown and Cairns were hazardous and difficult, and a prominent bushman, Christie Palmerston, found a better track which came out near Island Point. By 1877 entrepreneurs from Cooktown constructed a wharf and stores at the new port near Island Point and Palmerston’s track was cleared and marked. In October 1877 the port township was surveyed and named Port Douglas. 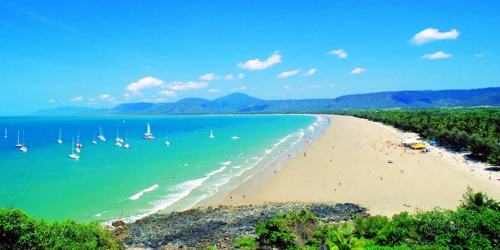 In the 2016 census, Port Douglas had a population of 3,504 people. The town’s population can often double, however, with the influx of tourists during the peak tourism season from May to September. The town is named in honor of a former Premier of Queensland, John Douglas. Port Douglas developed quickly based on the mining industry. Other parts of the area were established with timber cutting occurring in the area surrounding the Daintree River and with settlement starting to occur on lots around the Mossman River by 1880.

Port Douglas was No. 3 on Australian Traveler magazine’s list of 100 Best Towns In Australia. The town is within the federal electorate of Leichhardt, and within the state electorate of Cook. At the local level, it is in the local government area of Shire of Douglas (between 2008 and 2013, it was within the Cairns Region).

Two of the richest ecosystems in Australia lie a short hop from here: the ‘Great Barrier Reef’, with superb diving and snorkeling, and the ‘Daintree Rainforest’, part of the Wet Tropics World Heritage Site, which tumbles to the reef-dappled waters of Cape Tribulation. The town’s leafy streets are lined with mango trees and palms, as well as a cluster of upscale shops, cafes, and art galleries, and its star feature is ‘Four Mile Beach’, a blond crescent of jungle-fringed sand. Swimming is restricted here during marine stinger season (November through June), however it’s always a favorite spot for a stroll.

Today Port Douglas welcomes visitors from all over the world to experience the riches of this international holiday mecca which until as recently as the 1960s was a sleepy fishing village.

Port, as affectionately known by locals, is enjoyed by everyone. Families, couples, singles and celebrities are all inspired by the laid back lifestyle, superb natural attractions and effortless sophistication which blend together to create the unique flavor of Port Douglas.

The Port Douglas township was established in 1877 after the discovery of gold at Hodgkinson River by James Venture Mulligan. Port Douglas Post Office opened on 1 September 1877. It grew quickly, and at its peak Port Douglas had a population of 12,000 and 27 hotels. With the construction of the Mulligan Highway it serviced towns as far away as Herberton. In the town itself a school and a courthouse were opened in 1879, along with a hospital. Building of St Mary’s Catholic church commenced in 1880 and activity at the port was strengthened with the opening of the Herberton tin field in 1880. When copper was mined at Mount Molloy freight costs for the non-auriferous metals became a key factor, and an inland railway was planned. Mourilyan, Cairns and Port Douglas competed for the privilege and Cairns was chosen (1884), possibly unwisely when the geology of the Barron Gorge was fully understood. Investment in Port Douglas became less enthusiastic.

Minerals were not the only outwards freight from Port Douglas. Settlers came to the Mossman and Daintree River valleys and in 1883 the privately funded Brie-Brie sugar mill opened for Mossman cane growers. Cedar was brought down from the Daintree for Townsville timber merchants. Sugar production faltered in 1885, but grazing increased until the cattle tick outbreak in 1896. Fortuitously Mossman had a second chance with sugar when a new mill was opened in 1897, a central mill with cane growers tied to it through mortgage arrangements. By 1900 there was a tramline from the Port Douglas wharf to Mossman, for passengers and freight.

In 1911 a severe cyclone hit Port Douglas, destroying many buildings, including a large store, the Exchange Hotel, the Catholic church and presbytery, the Government bond store and the tramway station and engine shed. Rebuilding did not fully regain the town’s pre-cyclone building stock. Mossman’s population had overtaken Port Douglas’ before the cyclone, and the shire offices were moved to the sugar town in the 1920s. The hospital closed in 1935. The opening of the Cook Highway in 1933 from Mossman to Mareeba, creating a through road to Cairns, removed Mossman’s dependence on Port Douglas. The primary school closed in 1960, not re-opening until 1989. The town’s population descended to around 200 people, remaining at that number until the 1960s.

Port Douglas has a tropical monsoon climate according to Köppen climate classification (Am), with hot summers and warm winters, with heavy rainfall primarily occurring from January-March, the wettest month of the year typically being February. The average temperature of the sea ranges from 23.7 °C (74.7 °F) in July to 29.5 °C (85.1 °F) in January. 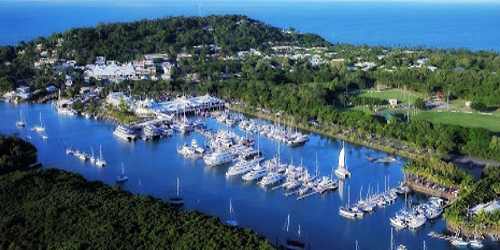 Port Douglas was a popular location to view the 14th November 2012 solar eclipse that occurred at 6:38 am (local time). Thousands traveled to Port Douglas to see the phenomenon. The music video for Kylie Minogue’s 1988 single “It’s No Secret” was filmed in Port Douglas.

Other prime tourist attractions include the Wildlife Habitat and the Bally Hooley Sugar Train, which chugs through sugar cane fields to Mossman. Fishing trips and northbound expeditions through the rugged landscape of the Cape York Peninsula are also popular. The winter season, from May through September, is the best time to visit when temperatures are cooler and drier weather prevails.