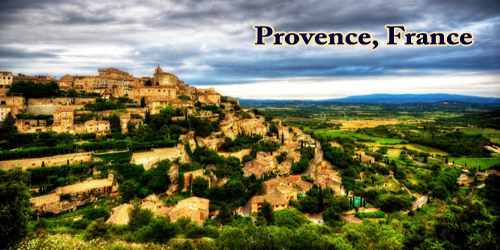 Provence (/prəˈvɒ̃s/, US: /proʊ-/; French: (pʁɔvɑ̃s); Provençal: Provença in classical norm or Prouvènço in Mistralian norm, pronounced (pʀuˈvɛnsɔ)) is a historical and cultural region encompassing the southeastern French départements of Bouches-du-Rhône, Vaucluse, Alpes-de-Haute-Provence, and Var. It is roughly coextensive with the former province of Provence and with the present-day region of Provence-Alpes-Cote d’Azur (q.v.).

Not only is it a beautiful region, it’s also bathed in a healthy dose of sunshine. Provence boasts the best weather in France! And there’s plenty to do in every season. History lovers will be in their element exploring the ancient chateaux that sit atop many hillside villages. Foodies will be spoiled with the fresh produce and locally made delicacies on offer at daily markets.

The Romans made the region the first Roman province beyond the Alps and called it Provincia Romana, which evolved into the present name. Until 1481 it was ruled by the Counts of Provence from their capital in Aix-en-Provence, then became a province of the Kings of France. While it has been part of France for more than five hundred years, it still retains a distinct cultural and linguistic identity, particularly in the interior of the region. 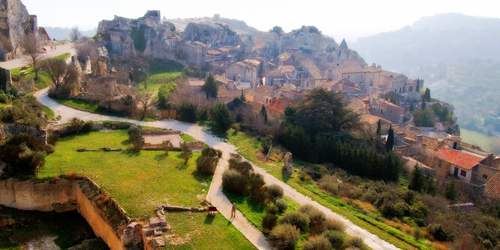 With the establishment of Greek colonies (among them Massilia [modern Marseille]) in the area by the beginning of the 6th century BC, Provence was first oriented toward the civilization of the Mediterranean. In 125 BC the Massiliots appealed to the Romans for help against a coalition of neighboring Celts and Ligurians. The Romans defeated the coalition but remained in the occupation of the region. Thus, by the end of the 2nd century BC, Provence formed part of Gallia Transalpina, the first Roman provincia beyond the Alps, from which the area took its name. By the 4th century AD, Arles, an important meeting place for merchants, was the seat of the prefecture of all Gaul, and Marseille was the main center of Greek studies in the west.

As the Roman Empire began to decline in the 5th century AD, a new wave of interlopers arrived the Christians. Many abbeys were constructed and the ruling bishops saw to the continued cultivation of the land. The Germanic tribes (the Visgoths, the Ostrogoths & the Franks) attempted to take advantage of the vacuum left behind by the Romans and were joined by Arab invaders and North African pirates who were having a field day throughout the Mediterranean. Add to this, the tussles between the Counts of Burgundy, Barcelona and the local Counts of Provence; meant that Provence was a pretty hazardous place to be from the 9th to the 13th centuries. Despite this, some fantastic architecture was built during these times. The wonderful Cistercian abbeys of Thoronet, Senanque and Silvacane were constructed in the 12th century, with the large gothic structure of the Basilique St Maximin la St Baume coming later during the 13th century.

Northern French influence in Provence dates from 1246 when Provence passed to the Angevin ruler Charles of Anjou, brother of King Louis IX. The province was at first subordinated to the Italian interests of these Angevin counts of Provence, who were also kings of Naples, but their reign witnessed the development of many of the region’s characteristic political institutions, notably its Estates (assembly), which had the power to approve taxes and to help govern the province in times of disorder in the late 14th century.

In 1309, Pope Clement V, who was originally from Bordeaux, moved the Papal Curia to Avignon, a period known as the Avignon Papacy. From 1309 until 1377, seven Popes reigned in Avignon before the Schism between the Roman and Avignon churches, which led to the creation of rival popes in both places. After that three Antipopes reigned in Avignon until 1423 when the Papacy finally returned to Rome. Between 1334 and 1363 the old and new Papal Palaces of Avignon were built by Popes Benedict XII and Clement VI respectively; together the Palais des Papes was the largest Gothic palace in Europe.

In 1481 Provence was willed to the king of France, and its union to the crown was effected on the condition that Provence keeps its administrative autonomy. From the 16th to the 18th century, however, control by the king grew. In 1673 the généralité of Aix was established as the seat of an intendant (royal governor), while the Estates of Provence were not convened between 1639 and 1787, until just prior to the French Revolution.

With the Revolution, the province completely lost its own political institutions and in 1790 was divided into the départements of Bouches-du-Rhône, Var, and Basses-Alpes (now Alpes-de-Haute-Provence). The département of Vaucluse was added after the annexation of Comtat Venaissin in 1791 and that of Alpes-Maritimes with the annexation of the countship of Nice in 1860.

The Revolution came to an end when Napoleon Bonaparte became First Consul in 1799, and then Emperor in 1804. There was a brief respite for the monarchy when the descendants of Louis VII were placed in power from 1814 to 1848, after which Louis Napolean (nephew of Bonaparte) was elected President. Stability returned to Provence at the same time as the Industrial Revolution, resulting in the spread of transport networks that allowed trade to flourish and the creation of wealth.

The second half of the 19th century saw a revival of the Provençal language and culture, particularly traditional rural values. Driven by a movement of writers and poets called the Félibrige, led by poet Frédéric Mistral. Mistral achieved literary success with his poem Mirèio (Mireille in French); he was awarded the Nobel Prize for literature in 1904.

Between World War I and World War II, Provence was bitterly divided between the more conservative rural areas and the more radical big cities. There were widespread strikes in Marseille in 1919, and riots in Toulon in 1935. The region comprises the Mediterranean coastline of southeastern France and its immediate (predominantly hilly or mountainous) hinterland. Provence is mostly Roman Catholic, though there are sizable Protestant enclaves around Marseille and in Vaucluse around Lourmarin and Merindol. Repatriated émigrés from North Africa have greatly increased the number of Jews in Provence. Occitan continues to be spoken in the Comtat Venaissin.

At the end of the 20th century, and the beginning of the 21st century, the residents of Provence were struggling to reconcile economic development and population growth with their desire to preserve the landscape and culture that make Provence unique. 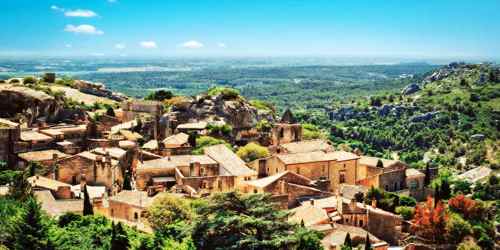 The original Roman province was called Gallia Transalpina, then Gallia Narbonensis, or simply Provincia Nostra (‘Our Province’) or Provincia. It extended from the Alps to the Pyrenees and north to the Vaucluse, with its capital in Narbo Martius (present-day Narbonne).

As more cities became a part of France, Provence began to work on restoring its ancient monuments and excavating its Roman ruins around 1859. The French Riviera area of Provence began to enjoy its status as a playground for the rich and famous around this time as well, but it was nearly destroyed in WWII when Provence was occupied by first Italian troops and then German troops in 1942. Heavy bombing at Provence’s harbors did further damage to the region, but the occupation ended shortly after the Allied forces arrived in 1944. After the war ended, Provence began to restore and rebuild once again.

Most of Provence has a Mediterranean climate, characterized by hot, dry summers, mild winters, little snow, and abundant sunshine. Within Provence, there are micro-climates and local variations, ranging from the Alpine climate inland from Nice to the continental climate in northern Vaucluse. The winds of Provence are an important feature of the climate, particularly the mistral, a cold, dry wind which, especially in the winter, blows down the Rhône Valley to the Bouches-du-Rhône and the Var Departments, and often reaches over one hundred kilometers an hour. 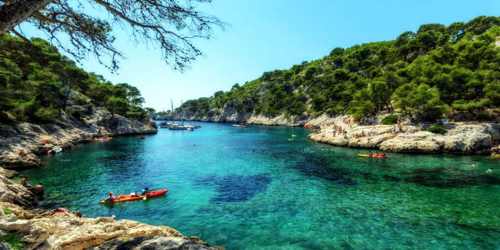 Some of history’s greatest creative and scientific minds have called Provence home throughout the years. Just to name a very few, Nostradamus, an apothecary and best known for his prophecies of great world events, was born in Provence in 1503 and died in Provence in 1566. Pablo Picasso couldn’t stay away from Provence and spent all of his summers there between 1919 and 1939. He eventually settled in the region for good in 1946 and remained there until his passing in 1973. British novelist and playwright, Somerset Maugham, purchased a villa in Provence in 1928 and spent must of his time there until his death in 1965.

The ultimate holiday destination, Provence has always been associated with scenic charm and a good life. Its peaceful hills resounding with the song of the cicadas, it’s wonderful fields of lavender and olive trees, its scrubland fragrant with the scents of thyme and rosemary, its impressive Verdon canyon, its exceptional rocky inlets, its secluded creeks, and its sandy beaches truly offer something to enchant every visitor.

This highly prized region has many attractions, and visitors can’t talk about Provence without mentioning the magnificent hillside villages of Luberon, the old papal city of Avignon, Aix-en-Provence’s old town, the Roman arenas in Arles, the famous Sainte-Victoire mountain immortalized by the painter Paul Cézanne, the small town of Saint-Rémy-de-Provence, the Sisteron citadel or the pottery of the picturesque village of Moustiers-Sainte-Marie, to name but a few.

Also appreciated for its tasty food and ancestral traditions, Provence clearly offers everything a visitor could want, with its colorful markets and delicious specialties, such as olive oil, tian, Sisteron lamb, Banon cheese, Cavaillon melon, Aix calissons or Provence honey!

While the region of Provence has become one of the world’s most popular vacation destinations with some 34 million visitors from all around the globe arriving each year, the region has held to its rich culture. There are still miles of olive groves and wine vineyards that continue to produce while Marseille’s port still sees plenty of commerce and freight. Of course, these days there is also an abundance of cruise ships in the port and visitors enjoying tours and tastings in the olive groves and wine vineyards. The region is a wonderful mixture of thriving cities that rarely sleep and smaller towns and villages where the old ways are still observed and life is simple.