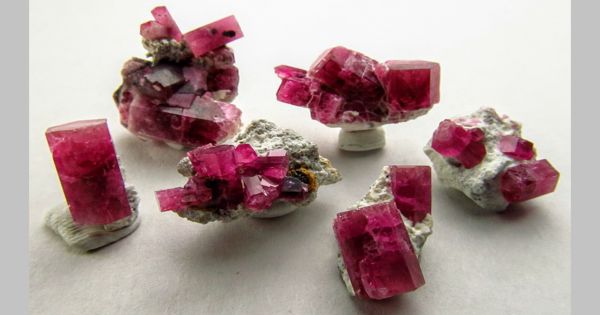 Red beryl is a one-source gemstone that is extremely rare. It is a red variety of beryl. It was first described in 1904 for an occurrence, its type locality, at Maynard’s Claim (Pismire Knolls), Thomas Range, Juab County, Utah. The gemstone gets its rich color from trace amounts of manganese and is a 7.5-8 on the Mohs hardness scale. The dark red color is attributed to Mn3+ ions.

Red Beryl displays beautiful, bright raspberry pinks to rich gooseberry reds in a variety of tones and saturations. It is a rare mineral because its formation requires a unique geochemical environment. It was named after the mineralogist Maynard Bixby.

Red beryl has been known to be confused with pezzottaite, a caesium analog of beryl, that has been found in Madagascar and more recently Afghanistan; cut gems of the two varieties can be distinguished from their difference in refractive index, and rough crystals can be easily distinguished by differing crystal systems. The crystals are often small, average weight of cut material is 0.1 to 0.4 carats, but may reach several carats. Synthetic red beryl is also produced. Like emerald and unlike most other varieties of beryl, red beryl is usually highly included.

Red beryl has been found at a few other locations in the United States as well as Mexico, but at these locations, the crystals are generally too small, short or imperfect to facet. It is very rare and has been reported only from a handful of locations: Wah Wah Mountains, Beaver County, Utah; Paramount Canyon and Round Mountain, Sierra County, New Mexico, although the latter locality does not often produce gem grade stones; and Juab County, Utah. Currently, there is no commercial production of gem-quality red beryl, according to several sources.

In the entire world, crystals suitable for cutting gems have been found in only one location, the Ruby-Violet claims in the Wah Wah Mountains of Beaver County, Utah. The greatest concentration of gem-grade red beryl comes from the Ruby-Violet Claim in the Wah Wah Mountains of mid-western Utah, discovered in 1958 by Lamar Hodges, of Fillmore, Utah, while he was prospecting for uranium. Red Beryl’s extreme geological rarity and characteristic inclusions are due to their formation 18 – 20 million years ago requiring a unique geochemical environment for aluminum, beryllium, manganese, oxygen, and silicon to crystallize.