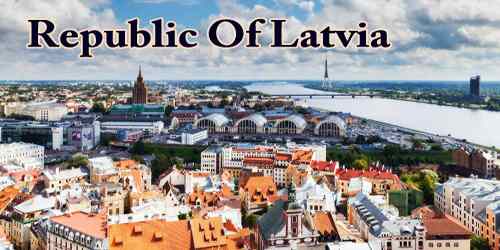 Latvia (/ˈlɑːtviə/ or /ˈlætviə/; Latvian: Latvija (ˈlatvija), Livonian: Lețmō), officially known as the Republic of Latvia (Latvian: Latvijas Republika, Livonian: Lețmō Vabāmō), founded in 1918 and located in Northern Europe; Latvia is a country that lies on the eastern shore of the Baltic Sea. It is a green country with a rich cultural heritage. A half of Latvia’s territory is covered by forests, which makes it the 4th most forested country in Europe.

Latvia has 1,957,200 inhabitants and a territory of 64,589 km2 (24,938 sq mi). Its capital and largest city is Riga; other notable major cities in Latvia are Daugavpils, Liepāja, Jelgava, and Jūrmala. The country has a temperate seasonal climate. The Baltic Sea moderates the climate, although the country has four distinct seasons and snowy winters. 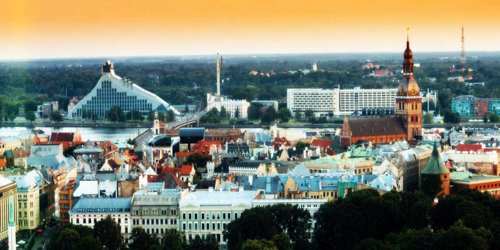 Latvia, which was occupied and annexed by the U.S.S.R. in June 1940, declared its independence on 21st August 1991. The U.S.S.R. recognized its sovereignty on September 6, and United Nations membership followed shortly thereafter. Latvia was admitted to the North Atlantic Treaty Organization (NATO) and the European Union (EU) in 2004. The capital and chief city is ‘Riga’.

Latvia is a safe and welcoming country, offering space and opportunities for everybody, whether you are looking for studies with a balance between moderate entertainment in bigger cities or the presence of nature in smaller cities. Latvia has it all. The University of Latvia and Riga Technical University are two major universities within the country, both established on the basis of Riga Polytechnical Institute and located in Riga.

The name Latvija comes from the name of the ancient Latgalians, one of four Indo-European Baltic tribes (along with Couronians, Selonians, and Semigallians), which formed the ethnic core of modern Latvians along with the Finnic Livonians. Henry of Latvia coined the latinisations of the country’s name, “Lettigallia” and “Lethia”, both derived from the Latgalians. The terms inspired the variations on the country’s name in Romance languages from “Letonia” and in several Germanic languages from “Lettland”.

The present-day territory of Latvia and ancestors of the Latvian people have been subjects of various European powers over the centuries. In the 13th century to 1561, it was the German religious orders. Then Poland conquered the territory in 1562 and occupied it until Sweden took over the land in 1629, ruling until 1721. Then the land passed to Imperial Russia. From 1721 until 1918, the Latvians remained subjects of the Russian Tsar, although they preserved their language, customs, and folklore.

World War I devastated the territory of what became the state of Latvia, and other western parts of the Russian Empire. Demands for self-determination were initially confined to autonomy, until an influence vacuum was created by the Russian Revolution in 1917, followed by the Treaty of Brest-Litovsk between Russia and Germany in March 1918, then the Allied armistice with Germany on 11th November 1918. On 18th November 1918, in Riga, the People’s Council of Latvia proclaimed the independence of the new country, with Kārlis Ulmanis becoming the pinnacle of the provisional government. The final representative of Germany August Winning formally handed over political power to the Latvian Provisional Government on 26th November.

The Republic lasted a little more than 20 years. It was occupied by Russian troops in and incorporated into the Soviet Union in 1940. German armies occupied the nation from 1941 to 1944. In 1944, Russia again took control of Latvia until 1990 when the Soviet Union started to collapse. The Republic of Latvia has been continuously recognized as a state by other countries since 1920 despite occupations by the Soviet Union and Nazi Germany. On August 21, 1991, Latvia declared the restoration of its de facto independence. Latvia has been an official EU Member State since 2004. Latvia has joined the eurozone as of 1st January 2014.

Latvia lies along the shores of the Baltic Sea and also the Gulf of Riga, and it’s bounded by Estonia to the north, Russia to the east, Belarus to the southeast, and Lithuania to the south. The eastern part of the country is more elevated, it’s most prominent feature being the Central Vidzeme Upland, which reaches a maximum elevation of 1,020 feet (311 meters). Within the southeast, the highest point is Lielais Liepukalns (947 feet (289 meters)), which is part of the Rāzna National Park territory. The Kurzeme (Courland) Upland within the west is split by the Venta River into western and eastern parts. Between the Central Vidzeme and Latgale uplands within the southeast lies the East Latvian Lowland, partly crossed by moraine ridges that impede drainage. There are numerous peat bogs during this area. 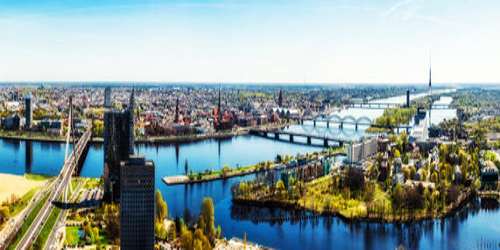 Latvia contains a multitude of rivers that drain into the Baltic Sea. The largest are the Western Dvina, locally called the Daugava (with a total length of 222 miles (357 km) in Latvia), the Gauja (Russian: Gauya), the Venta, and the Lielupe. Amid the hills, many of which are forested, are numerous lakes, some measuring up to about 12 square miles (30 square km). Latvia’s soils are predominantly podzolic, though calcareous soils characterize the Semigallia (Zemgale) Plain, located just east of the Eastern Kurzeme Uplands. Swampy soils are found in some areas, particularly the East Latvian Lowland. Erosion is a problem in the more intensely cultivated hilly areas.

Latvia has a temperate climate that has been described in various sources as either humid continental (Köppen Dfb) or oceanic/maritime (Köppen Cfb). Humidity is high, and the skies are usually cloudy; there are only about 30 to 40 days of sunshine per year. Average precipitation usually exceeds 20 inches (about 500 mm) on the lowlands and may approach or exceed 30 inches (about 760 mm) on the uplands. The frost-free season lasts about 125 to 155 days. Summers are often cool and rainy. The mean temperature in June is in the mid-60s F (about 17 °C), with occasional jumps into the mid-90s F (about 34 °C). Winter sets in slowly and lasts from the middle of December to the middle of March. The mean January temperature ranges from the upper 20s F (near −2 °C) on the coast to the lower 20s F (about −7 °C) in the east. There are occasional extreme temperature drops into the −40s F (about −40 °C).

Latvia has a vibrant cultural life. With over 800 Art Nouveau buildings, Riga has one amongst the world’s greatest galleries of this joyful style. Classical and modern music and dance performances are of prime quality. Folk music and dance traditions are alive and play a large role in everyday life from teaching children morals at school to the nation-wide song and dance festivals held every four years.

Latvia’s fauna consists of squirrels, foxes, hare, lynx, and badgers. Somewhat less common are ermines and weasels. Conservation measures have resulted in an increase in the number of deer and elk, and beavers have been reintroduced to Latvia. The country’s bird population includes the nightingale, oriole, blackbird, woodpecker, owl, grouse, partridge, finch, tomtit, quail, and lark. Storks and herons are usually found in the marshes and meadows.

Latvia has the 5th highest proportion of land covered by forests in the European Union, after Sweden, Finland, Estonia, and Slovenia. Forests account for 3,497,000 ha (8,640,000 acres) or 56% of the total land area. Latvia has over 12,500 rivers, which stretch for 38,000 km (24,000 mi). Major rivers include the Daugava River, Lielupe, Gauja, Venta, and Salaca, the largest spawning ground for salmon in the eastern Baltic States. 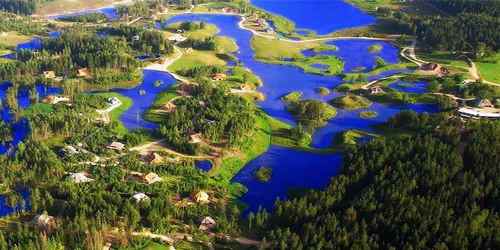 The majority of Latvians adhere to Christianity mainly Lutheranism, Roman Catholicism, and Eastern Orthodoxy. About one-fourth of Latvians consider themselves nonreligious. Latvia had a significant Jewish population estimated at more than 90,000 in the 1930s until the Soviet and German occupations during World War II when tens of thousands of Latvian Jews fled the country, were deported to prison camps or concentration camps or were killed. Nazi forces were responsible for between 65,000 and 75,000 of these deaths. By war’s end, only several thousand Latvian Jews remained.

Latvians enjoy eating – food is the central element of almost any celebration. Traditional food is filling and nourishing, because of the northern climate and the hard work farmers and fishermen were used to do. Meat, fish, potatoes and dairy products are the most popular components of main dish meals. Salads are more often composed of vegetables than of greens, and sour cream or mayonnaise is the preferred dressing.

Contemporary Latvians are still very fond of their traditional dark rye bread and mostly choose food that is in the season to get the best flavor and price. Many people enjoy growing their own fruits and vegetables or harvesting wild berries and mushrooms from the forests. Of course, one can find a variety of fruit and vegetables from around the world all through the year at supermarkets.