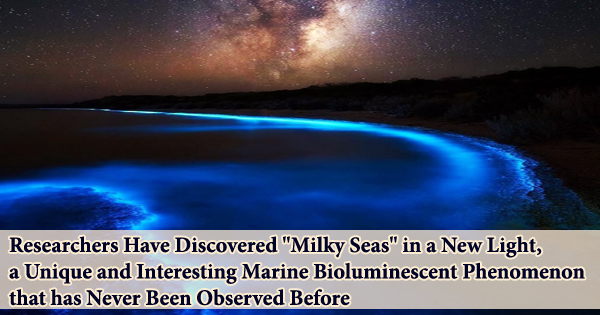 Researchers Have Discovered “Milky Seas” in a New Light, a Unique and Interesting Marine Bioluminescent Phenomenon that has Never Been Observed Before

The biggest known type of bioluminescence is the milky seas, which are an elusive and uncommon exhibition of bioluminescence in the Earth’s ocean. Milky seas, unlike the chaotic froth generated by ship wakes, produce a long-lasting, broad, and homogeneous glow on the ocean’s surface that can last several nights and cover more than 100,000 square kilometers (almost 39,000 square miles), roughly the size of Kentucky.

These extreme circumstances are only encountered by mariners in a few isolated parts of the planet, primarily the northwest Indian Ocean off the Horn of Africa and the waters surrounding Indonesia. Predicting when, where, and why milky oceans emerge is still a scientific conundrum today.

According to Steve Miller, CIRA’s new director and principal author on the Scientific Reports study, surreal accounts of the mythical “milky sea,” which eyewitnesses say lights as brightly as a snowfield or a bed of clouds, have been exchanged among seafarers throughout history. These tales made their way into maritime adventure books like Moby-Dick and Twenty Thousand Leagues Under the Sea, and they became part of mythology rather than scientific observation.

Only once, in 1985, did a research vessel pass through a milky sea, out of more than 200 observations dating back to the 19th century. The light was caused by a type of luminous bacteria populating a bloom of algae at the water’s surface, according to a water sample taken at the time. However, this idea fails to explain several of the characteristics of milky oceans, particularly in light of eyewitness testimonies.

Researchers are now in a better position to learn much more about the conditions of this interesting occurrence, thanks to fresh observations from space. The Suomi NPP and NOAA-20 satellites capture pictures from high above the world’s seas using a sophisticated array of sensors, including the “Day/Night Band” instrument. The Day/Night Band detects extremely small quantities of visible light at night, peering through the darkness to show the glow of city lights, the flames of forest fires, and much more, including the capacity to view milky oceans for the first time.

Researchers at CSU’s Cooperative Institute for Research in the Atmosphere (CIRA) are continuously examining satellite data, particularly Day/Night Band observations. This device was used in CIRA research to show how the COVID-19 epidemic affected human activities by altering city lighting. It has also been used to identify a new phenomenon of nocturnal lighting in the Earth’s atmosphere, according to researchers.

“The Day/Night Band continues to amaze me with its ability to reveal light features of the night. Like Captain Ahab of Moby-Dick, the pursuit of these bioluminescent milky seas has been my personal ‘white whale’ of sorts for many years,” Miller said.

Miller and his colleagues discovered 12 occurrences of milky seas between 2012 and 2021 by carefully studying Day/Night Band data from three areas where the phenomena is frequently reported. Patience and the correct conditions are required to capture the light generated by milky oceans. The signal can be obscured even by weak moonlight reflected off the ocean’s surface.

Observations can also be contaminated by light released by the blazing upper atmosphere, both straight upward and as reflected by the clouds. Researchers utilized advanced algorithms to discover the persistent bioluminescent structures producing light beyond the background noise by carefully analyzing signals in satellite data to rule out alternative sources of light emission.

These luminous masses of water move with ocean currents and appear as a continuous glowing patch on the ocean at night. During the day, these patches vanish from view owing to the overwhelming quantity of light from the Sun contrasted to the modest glow from the water, but they reappear to the satellite at night.

“Milky seas are simply marvelous expressions of our biosphere whose significance in nature we have not yet fathomed,” Miller said. “Their sheer existence tells an improbable and captivating story that connects the surface to the sky, the microscopic to the global dimensions, and human experience and technology over the years, from 18th-century commerce ships to modern-day spaceships. The Day/Night Band has lit yet another pathway to scientific discovery.”