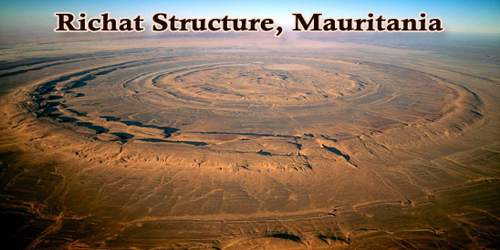 The Richat Structure, also called Guelb er Richât (Arabic قلب الريشات Qalb ar-Rīšāt), the “Eye of Africa”, or “Eye of the Sahara” is a prominent circular feature in the Sahara’s Adrar Plateau, near Ouadane, west-central Mauritania. From space, this natural curiosity forms a distinct and unmistakable bulls-eye that once served as a geographical landmark for early astronauts as they passed over the Sahara. Geologists believe that the Eye’s formation began when the supercontinent Pangaea started to pull apart.

Once thought to be an impact crater due to its circularity, the unusual formation is now widely believed to have been caused by the erosion of what was once a geological dome. Over time, desert weather has caused the dome to gradually shed layers, resulting in the structure’s remarkable flatness.

The Richat Structure is a deeply eroded, slightly elliptical dome with a diameter of 40 kilometers (25 mi). The sedimentary rock exposed in this dome ranges in age from Late Proterozoic within the center of the dome to Ordovician sandstone around its edges. The sedimentary rocks composing this structure dip outward at 10-20°. Differential erosion of resistant layers of quartzite has created high-relief circular cuestas. Its center consists of a siliceous breccia covering an area that is at least 30 kilometers (19 mi) in diameter. 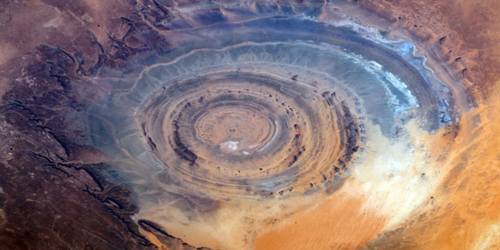 Once thought to be the result of a meteor impact, today researchers believe the Richat Structure was caused by the process of geological uplift followed by erosion from wind and water. The onion-like formation is formed by concentric bands of resistant quartzite rocks form ridges, and between with valleys of less-resistant rock between them. The dark area forms a plateau of sedimentary rock standing some 200 meters above the surrounding desert sands, with the peak of the outer rim of the structure some 485 meters above sea level.

Exposed within the interior of the Richat Structure are a variety of intrusive and extrusive igneous rocks. They include rhyolitic volcanic rocks, gabbros, carbonatites, and kimberlites. The rhyolitic rocks consist of lava flows and hydrothermally altered tuffaceous rocks that are part of two distinct eruptive centers, which are interpreted to be the eroded remains of two maars. According to field mapping and aeromagnetic data, the gabbroic rocks form two concentric ring dikes. The inner ring dike is about 20 m in width and lies about 3 km from the center of the Richat Structure. The outer ring dike is about 50 m in width and lies about 7 to 8 km from the center of this structure. Thirty-two carbonatite dikes and sills have been mapped within the Richat Structure. The dikes are generally about 300 m long and typically 1 to 4 m wide. They consist of massive carbonatites that are mostly devoid of vesicles. The carbonatite rocks have been dated as having cooled between 94 and 104 million years ago.

Western Sahara no longer has the temperate conditions that existed during the Eye’s formation. However, it is possible to visit the dry, sandy desert that the Eye of the Sahara calls home but it’s not a luxurious trip. Travelers must first gain access to a Mauritanian visa and find a local sponsor. Once admitted, tourists are advised to make local travel arrangements. Some entrepreneurs offer airplane rides or hot air balloon trips over the Eye, giving visitors a bird’s-eye view. The Eye is located near the town of Oudane, which is a car ride away from the structure, and there is even a hotel inside the Eye.

A kimberlitic plug and several sills have been found within the northern part of the Richat Structure. The kimberlite plug has been dated to around 99 million years old.

The dunes around the Richat Structure are part of the Ouarne (Erg Oudane), an immense body of sand stretching hundreds of kilometers to Mali, within which still stand some ancient Ksours. A Ksour is a medieval settlement made up of towers, houses and surrounding walls, placed along with trade centers of caravanning routes across the Sahara. The Ksours found in this vicinity were inscribed on the UNESCO World Heritage List in 1996.

The Richat Structure is regarded by geologists as a highly symmetrical and deeply eroded geologic dome. It was first described in the 1930s to 1940s, as Richât Crater or Richât buttonhole (boutonnière du Richât). Richard-Molard (1948) considered it to be the result of a laccolithic thrust. A geological expedition to Mauritania led by Théodore Monod in 1952 recorded four “crateriform or circular irregularities” (accidents cratériformes ou circulaires) in the area, Er Richât, Aouelloul (south of Chinguetti), Temimichat-Ghallaman and Tenoumer.

The Richat Structure (or Eye of the Sahara) attracts both tourists and geologists, who flock to the Eye to study the unique geological feature in person. However, because the Eye is located in a sparsely inhabited region of the desert with very little water or rainfall, it is not under much threat from humans.